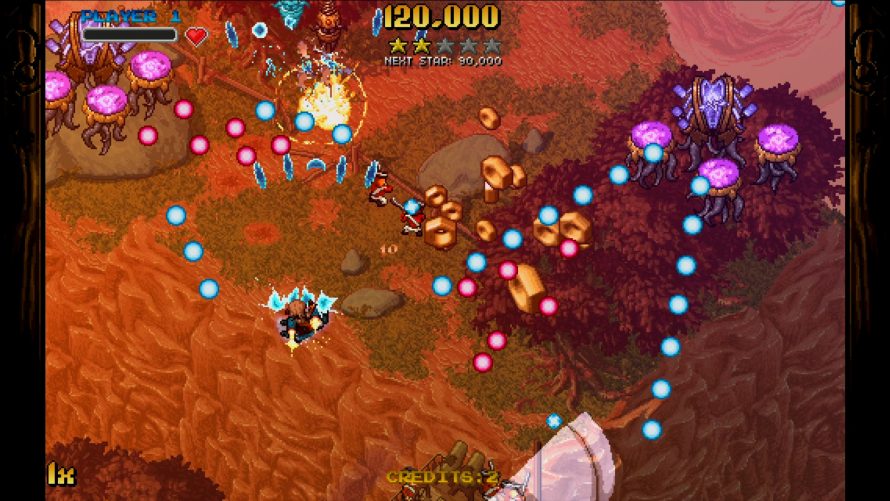 Welcome to Jamestown+. The year is 1619 and you’ll be playing the part of… well, a criminal; albeit one determined to atone for his crimes, while being chased by the authorities. Seeing how the sentence awaiting is execution rather than imprisonment, can you really blame him? Well, either way, a grand mystery awaits, and with a little luck, solving it just might help the protagonist atone for his sins. How? Oh, simple: survive this aptly called ‘bullet hell’ long enough to repel invading forces. Or some such.

Needless to say, my interpretation of the game’s story might have been a bit blurred from all the times those pesky invaders blew up my ship. So darn rude. I was just trying to clear my name, even if it meant blasting them to smithereens – in a way that somehow resulted in gold raining down towards me, every time one or more foes fell to my guns. And what glorious guns they were, each with a neat little special trick in the form of an alternate firing mode. They never stood a chance.

Okay, so that last part is a downright lie, for while Jamestown+ doesn’t start out as an overly challenging genre entry – provided you don’t immediately crank it up to ‘divine’, the second-highest of five difficulties – near the end, it will most certainly be. So much in fact, that I saw myself unable to actually finish the fight, the last boss of the final mission draining one life after another leading to the eventual spending of my two credits, after which the game over screen would rear its ugly head. I can’t even claim it was an unfair fight either, as it was pretty clear I simply wasn’t skilled enough to dodge everything thrown at me during. That’s what I want to say, but here’s the thing: you’re forced to play it on ‘legendary’ difficulty, which is just one below ‘divine’. 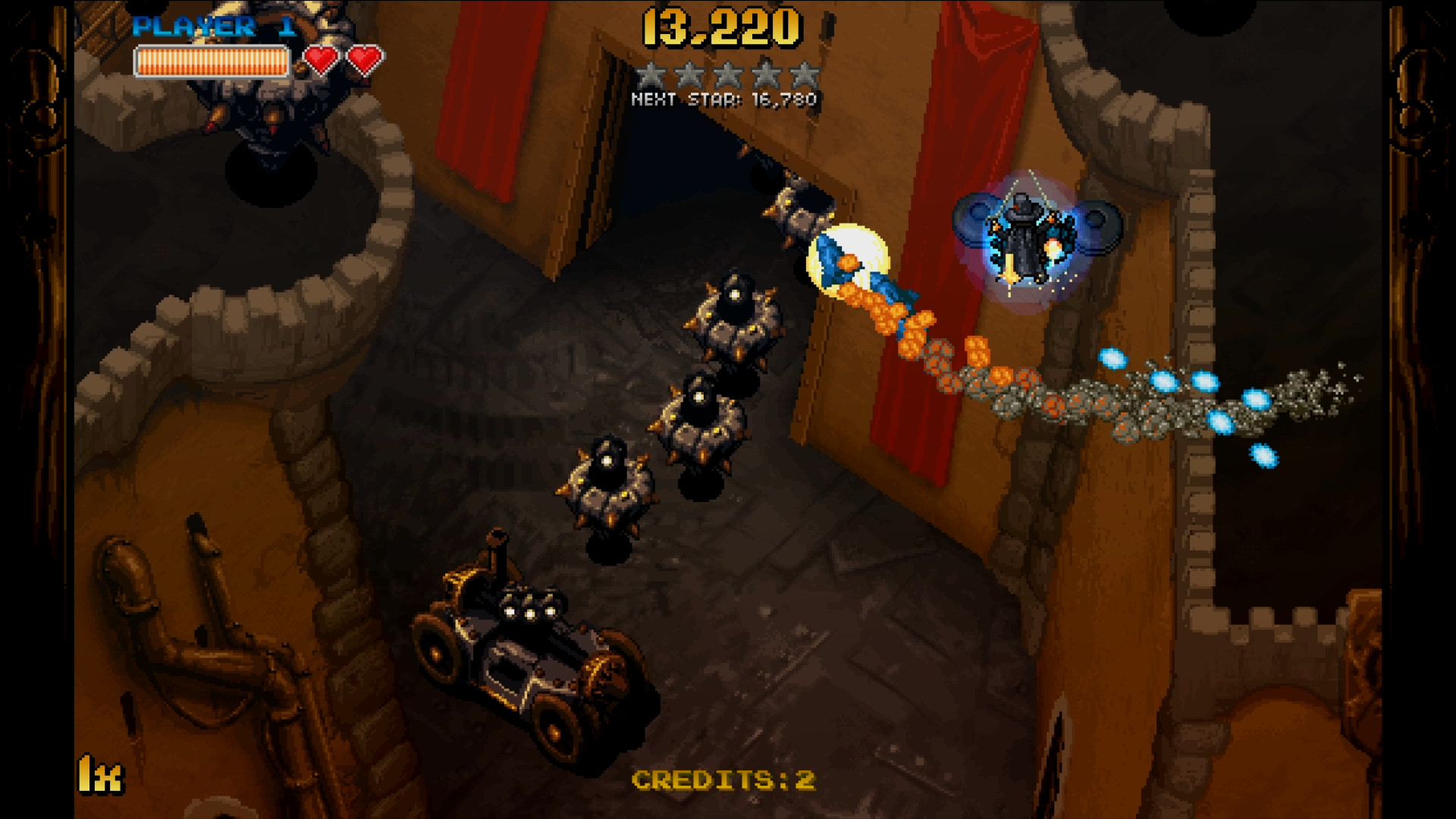 Wouldn’t it have made more sense to simply increase the challenge in the enemy/level design instead? Or perhaps this is some kind of weird way of telling those who even made it this far that they haven’t actually finished the fight until every level has been cleared on ‘legendary’ difficulty? I don’t know. On a related note, it’s fortunate that levels are relatively short – most wrapping up after some five minutes – because unless you for some reason went straight for ‘legendary’, you’ll be replaying every single level prior, to unlock the finale. Not sure why they felt the need to do that, instead of simply allowing players to enjoy everything on offer at a difficulty they’re comfortable with instead. But alas, that’s not how it works here, and hey – at least ‘divine’ is locked from the get-go, likely only becoming available after a full clear of every level. A feat I shall likely never accomplish. That said, in spite of struggling in the finale, I did still have plenty of fun prior, with Jamestown+.

A lot of this certainly stemmed from the number of available ships, each of the twelve featuring its own little unique bits and bops: from a destructive beam that slows down your movement during use to a deployable turret of sorts, explosive barrels, and even a ship with customizable weapons – plenty opportunities to wreak havoc across the board (or Mars, I suppose). There’s just something about playing a bullet hell title and not being limited to the usual ‘either you shoot in these directions, these, or those’, ya know? Oh, and as mentioned earlier, every last ship comes with an alternate fire mode, as well as something the game calls ‘Vaunt’. Something you’ll want to use sparringly, for while it does surround your ship with a bullet dissolving shield… replenishing the Vaunt meter requires gold, and that means blowing up enemies. While there’s certainly no shortage of fodder, I still stand by my remark regarding when to use it. Then again, once the shield’s gone, your damage output doubles and a score multiplier is triggered – until said Vaunt meter is emptied. Might sound a tad complicated, but after a few levels, it’ll be second nature. 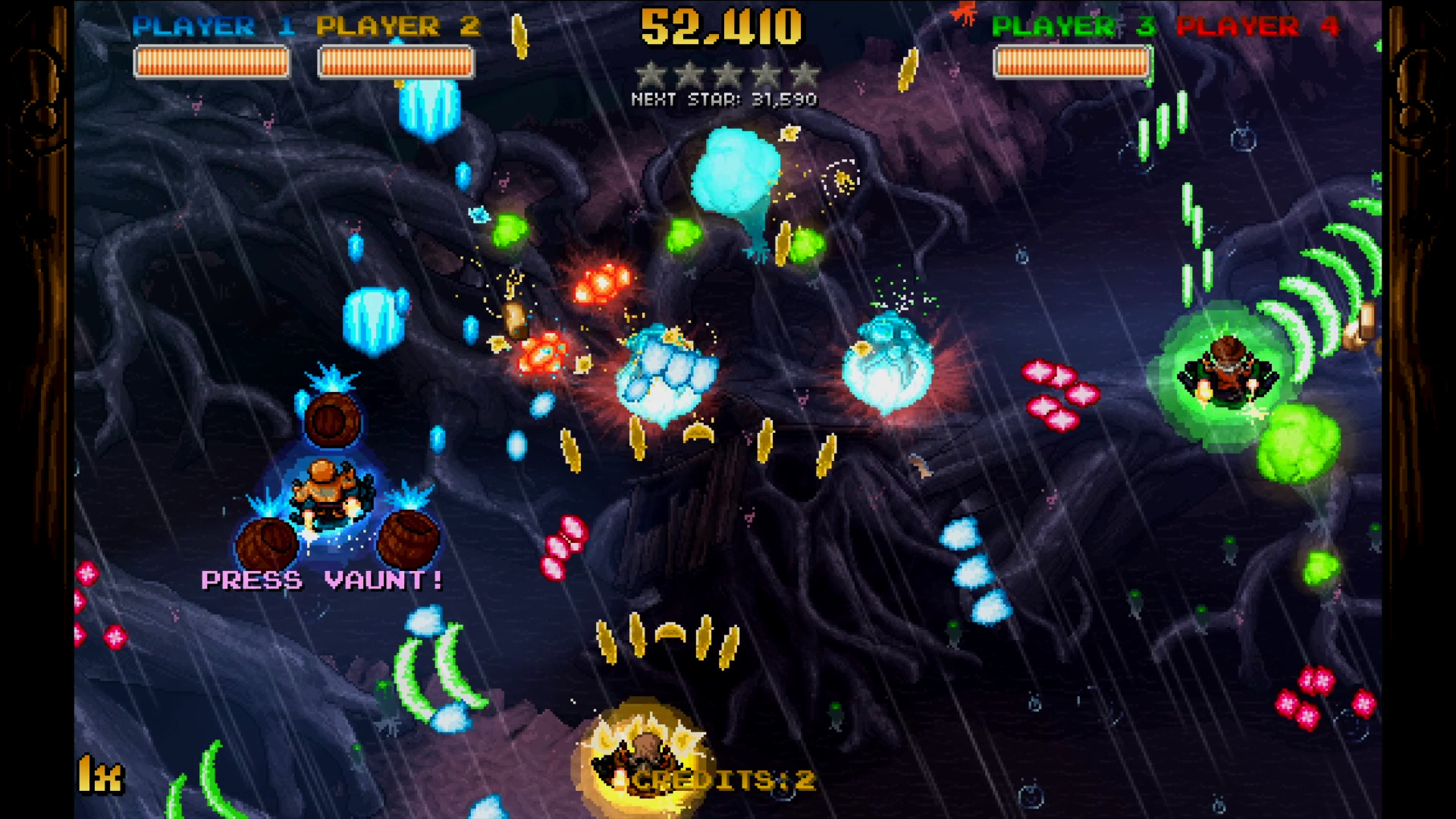 Unless of course, you opt for bringing up to three friends along for some local co-op, in which case… uh… hope you like screen clutter. Chances are it just takes some getting used to, but man, when I fired up Jamestown+ with two of my friends (courtesy of Steam’s Remote Play With Friends), every other death was faulted with “too much happening on-screen”. Having since played through a lot of the same levels alone, and on several difficulties no less (curse you, level gating!), I did actually have a much easier time surviving the onslaught while flying solo. This was a tad odd, seeing how the only way credits are spent in co-op is when everyone is dead at the same time, and enemies even drop revive tokens every so often. As such, I’m gonna chalk it up to a lack of experience instead of labeling it as a poorly implemented feature, because we had fun, even even if very little progress was ever made. Color coding specific to each player is a thing too, so yeah, we just have to learn the ins and outs, get better, and so on.

Or perhaps we were simply too busy taking in the lovely pixellated scenery to dodge bullets? Nah. It is quite a sight, even if explosions tend to cover much of it up rather frequently, but distinguishing enemies from background textures? Never an issue. Their outlandish designs, however, did raise an eyebrow or two during the handful of hours I spent playing for this here review. Not that the appearance of invaders from distant planets is set in stone, of course, and they definitely fit in well with the overall steampunk-ish aesthetic. Especially when the big ones blew up, filling the screen with cogs and bolts (aka. gold, or rather, Vaunt fodder). Such a glorious sight. That’ll teach them to mess with me. 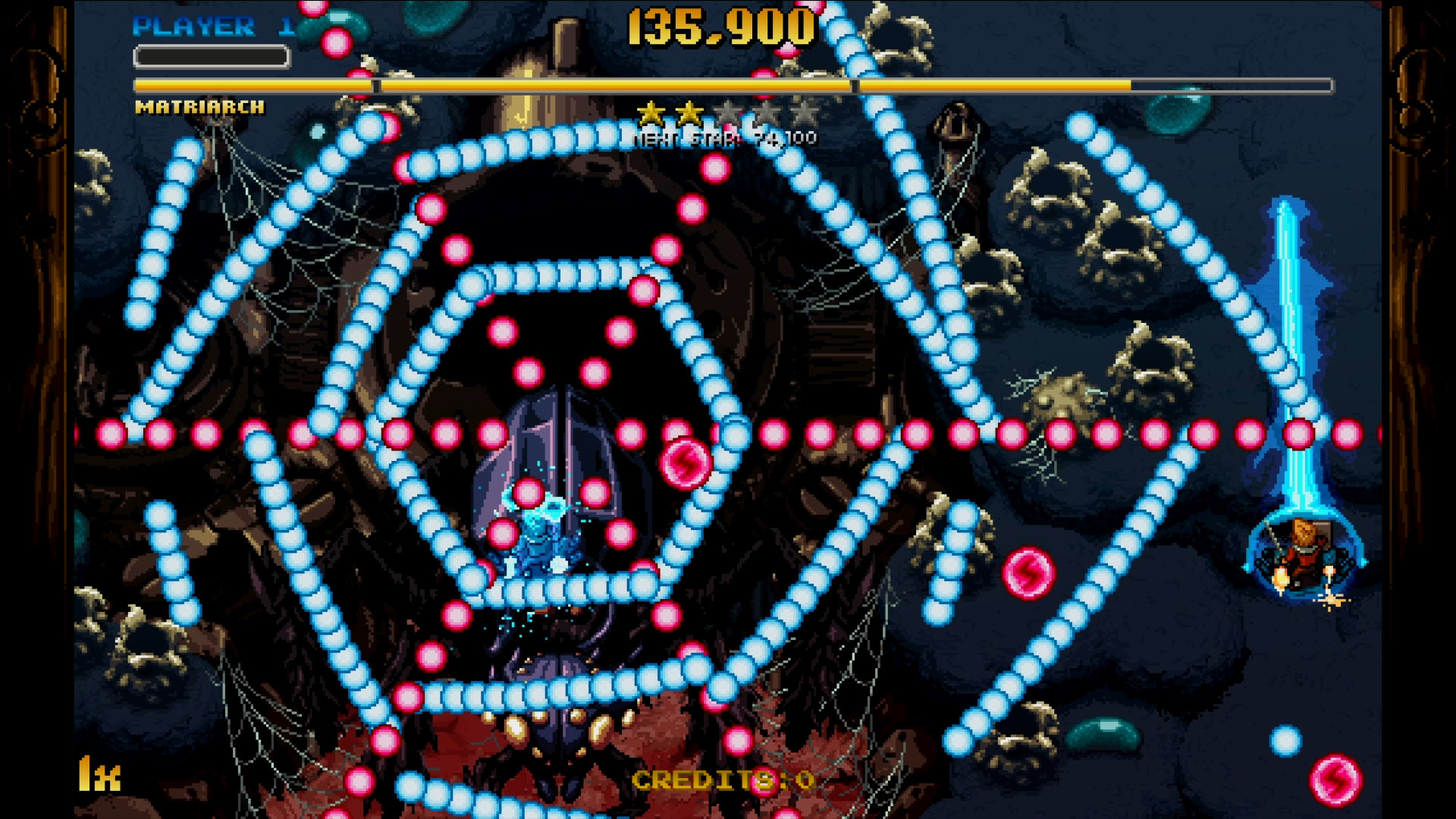 Right. Anyway, oddly enough, how well you do in a level only affects your score (which is automatically uploaded to a slew of leaderboards), not how much currency you acquire for spending on various unlockables. The amount acquired here is instead determined by a flat amount in each level… and then there’s a handful of potential multipliers: completion %, difficulty, and the boss. Not entirely sure how that last one is applied, but at least you are still rewarded a fair amount of coin, even if you don’t clear the current level. Accumulate enough, and you’ll eventually end up with loads of ships to choose from, several additional modes and other fun additions. Replayability is definitely present and accounted for, much like experimentation as you attempt to find that one ship to perfectly fit your play style. Or perhaps absolutely destroying every last challenge is more your kind of thing, in which case, good luck. You’re definitely gonna need it.

All in all, odd design choice to lock progress behind clearing levels on higher difficulties aside, I thoroughly enjoyed Jamestown+, even though I’m not exactly the biggest fan of its genre. Sure, I didn’t finish it, but last time I checked, that’s not a requirement for recommending a game. Which is what I’m doing right now. Oh, and in case you’re put off by the level of action portrayed by screenshots chosen for this article, don’t worry – it’s even crazier than it seems. Or is that ‘less crazy’? I forget. So many bullets. So many explosions. So much FUN!

Jamestown+ is available on Steam (reviewed), Switch, and PlayStation 4, carrying a $17.99 price tag.