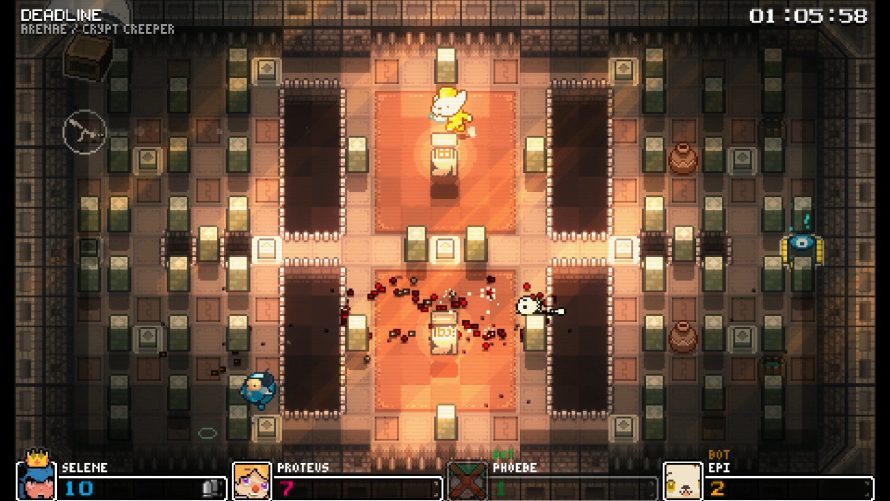 Because being able to see other players – or even yourself – in a single-screen multiplayer game is so darn boring, Invisigun Heroes exists. Or maybe there’s a different reason for it. Well, either way, everyone’s invisible here. Everyone. We’ll all be even more invisible after the Invisigun Reloaded update launches too, or at the very least, there’ll be a brand new single-player portion to stomp through, alongside many small useful tweaks and… net code optimizations. Groovy.

What hasn’t changed/been removed, however, is the game’s bot support. Still there. For those times when you simply prefer an AI of varying competency levels over duking it out with actual people. It’s been known to happen from time to time. Still got a staggering amount of battlegrounds too in Invisigun Reloaded, and of course a selection of characters with unique abilities to ensure everyone’s kept on their toes. In case the whole invisibility thing didn’t take care of that already. See, only when firing or using abilities will a player be visible. Oh right, footprints and such also kinda give away their position, and seeing how the entire thing is grid-based… fast movement and quick thinking is definitely key to emerging victorious.

So, some things will, needless to say, be gone after this update. The biggest perhaps is the Challenge Mode, although at least its replacement – Hero’s Journey – seems like a noticeable improvement, so there’s that: “designed from the ground up as a proper single player campaign that is challenging and engaging while teaching players each of the 9 original hero abilities”. Yup. I like the sound of that. Guest Edition will also be scrapped – for the simple reason of a demo requiring too much maintenance at this point, what with all the bells and whistles in Invisigun Reloaded.

Plenty other fun things also make up the changelog, including a slew of fixes. Seriously, a lot of things are going to change on the 22nd, so if you’re an Invisigun Heroes veteran, give it a read prior to engaging in combat after that date to avoid potentially nasty surprises.

Invisigun Heroes is available on Steam, itch.io, and Humble Store, carrying a $14.99 price tag until the Switch version launches, after which it’ll be $19.99.

Invisigun Reloaded - Launch Trailer - Nintendo Switch
Facebook Twitter LinkedIn Pinterest Tumblr WhatsApp Telegram E-mail
Previous article Build a Boat, Board it With All Your Friends to Survive New Challenges in 'Don't Starve Together: Return of them - Turn of Tides'
Next article Those Who Found Chaos Mode in 'Clea' Too Easy: Look Forward to Chaos+ and Invisible Mode