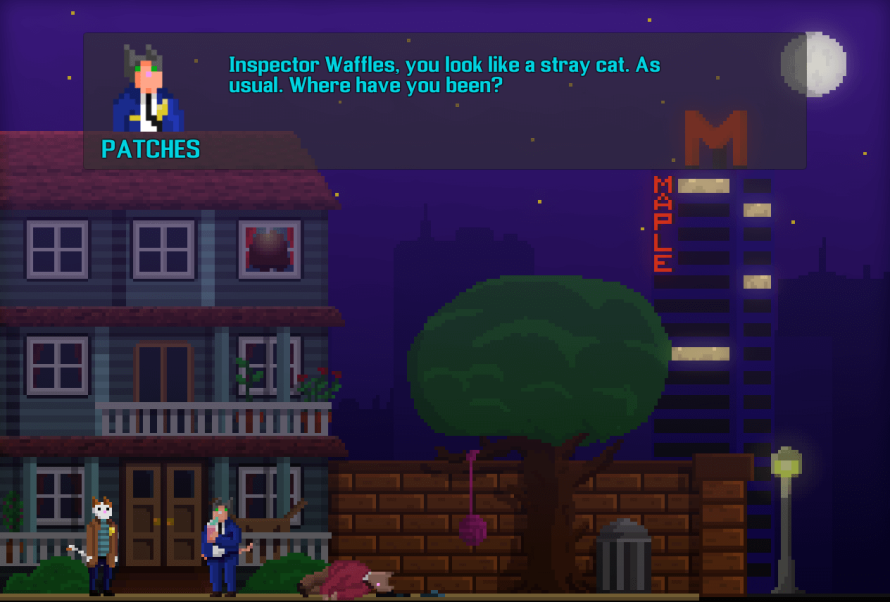 All is far from well in Cat Town, as one fateful evening, rich industrial Fluffy was found dead at his house. Did someone murder the poor cat or did he kill himself? No one knows, and unsurprisingly, this is where you come in. Step into the shoes of inspector Waffles and burn the midnight oil to solve this rather peculiar case. Oh and… there appears to be no way to actually reach the crime scene (wait, what?).

Point ‘n click adventures with anthropomorphic cats and dogs aren’t overly common, so kudos to Goloso Games for trying something different here – even more so because, well, who doesn’t love cat/dog puns in their murder mysteries? Aside from that irregular choice, I’d say we’re dealing with a normal genre entry here: interact with the environment to gather clues, pick up items and combine them (because point ‘n click adventure), interrogate everyo– suspects and solve a variety of brainteasers. All in the name of justice.

Well, when you’re not dealing with/interrogating/trying to avoid/all of the above the “crazy, stupid, dangerous, cunning and funny characters” that inhabit Cat Town, at least. Far as I can tell, the ‘stupid’ bit describes the cops more than anyone else, in this pixellated adventure. Unfortunately, right now, it’s nigh impossible to really tell what’s what, who – if any – murdered Fluffy, and several other things, as… the game is not finished yet. It will be this winter though, and hey, you can still purchase and play Inspector Waffles today – long as you’re okay with experiencing a WIP build. Meow?