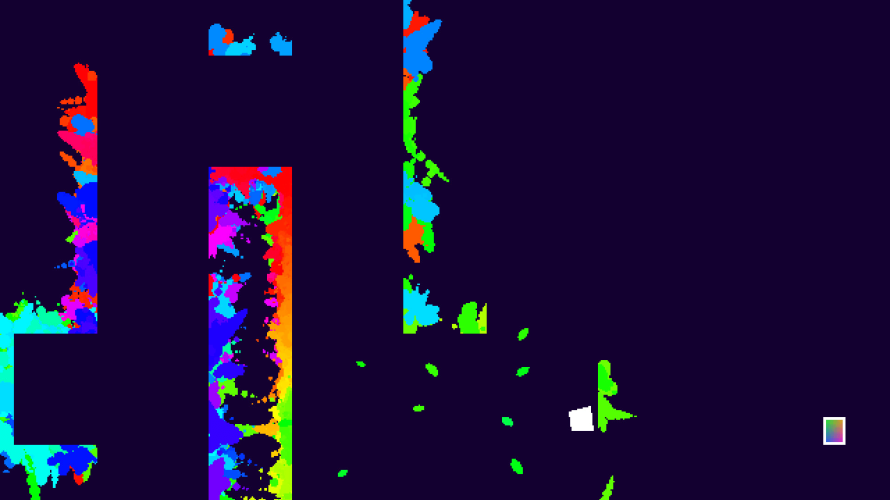 Tough-as-nails platformers aren’t exactly uncommon anymore, although ones where the levels are invisible? Definitely don’t see that too often, and since navigating INK‘s invisible terrain would be nigh impossible, it’s fortunate that the power of paint (or ink, if you so prefer) is yours to use. Jumping, and even basic left/right movements will coat your surroundings with multiple layers of color, revealing the lay of the land as it were. Neat, eh?

Ain’t just about bouncing around, crossing gaps and performing fancy wall-jumps though, as there are also enemies to deal with. That said, the pathetic lot are easily squashed, literally, since… well, jumping on each will spell its end. Simple enough. The turrets, ‘timed’ stages and boss fights, on the other hand, are noticeably more tricky to deal with, but as always, practice – and plenty paint – makes perfect.

Speaking of trickery, should you end up dying, which is likely to occur at least fifty or so times throughout the game’s seventy-five levels, the paint will also cover terrain near your point of demise! Groovy. Very groovy. Oh and levels don’t reset between attempts, so feel free to abuse the ability to ‘death paint’ as much as you like, even if that does sound like a rather odd thing to do. But hey, part of the experience, ya know?