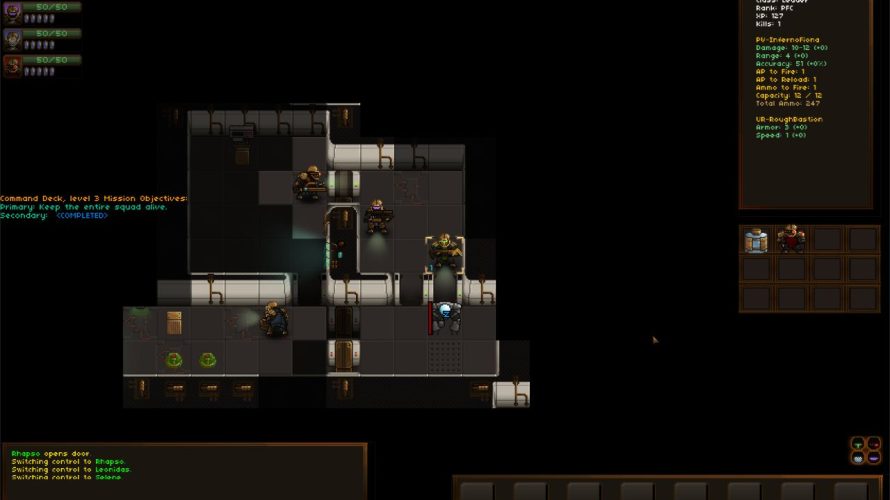 Steam Marines is a squad-based roguelike from Worthless Bums.. in space. Finally, a roguelike that doesn’t have dragons, wizards, and warriors, eh? It does, however, feature genre stables like permadeath, procedurally generated levels (and items), along with plenty of turn-based combat and monsters to demolish!

While the game is still in alpha, the current (0.6.4a) build is highly stable and enjoyable, and with the latest update you can even play on ‘easy’ if you find that ‘normal’ is kicking your ass a bit too much; roguelikes are infamous for being difficult, after all, and after an hour or two I’d say that Steam Marines is no exception.

Primary and secondary mission objectives have also been added, though currently, their only purpose is bonus XP. According to the developer, the plan is to flesh these out in the future and give the game an overarching story (along with an ending, which it currently lacks).

The aim of the game is to progress through the various decks of your besieged steampunk spaceship in order to repel the alien invaders and get out of dodge. It features permadeath and will have a recruitment system.
(source)

I do hope that the aforementioned recruitment system will be implemented soon because even on easy, Steam Marines can be quite a challenge; especially since random is after all random. But let’s not forget that it’s still in alpha and updates have been frequent, so chances are it’ll be added sooner or later, and even though there are a few bugs here and there (hint: alpha build), it’s still playable. Did I mention you can blow walls up and create your own path? KABOOM!

The full changelog for 0.6.4a can be found here, while the alpha can be downloaded from here, and don’t forget about Steam Greenlight, eh?