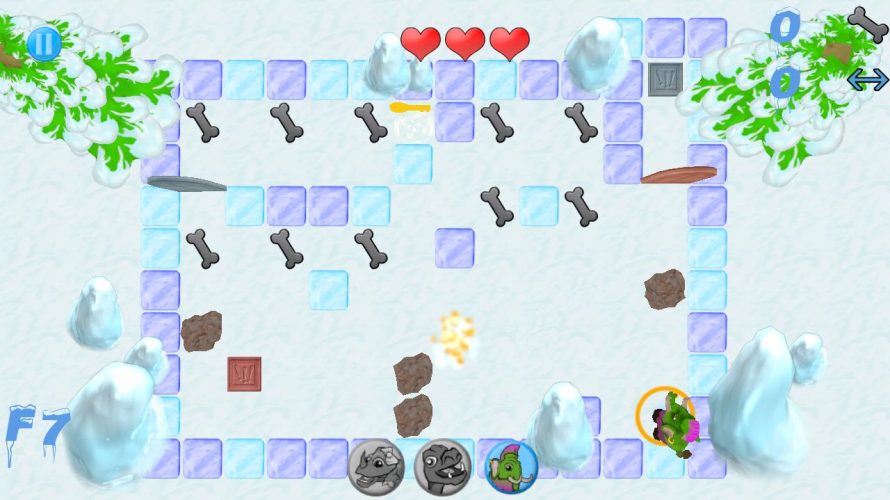 In order for this uncanny trio to escape the glacier, teamwork is mandatory. Peter is the only one who can swim, Mohawk can push boulders and Tori… let’s just say she has a way with fire. Remember: no prehistoric creature is more important than the other, make the most of their abilities, plan accordingly, and maybe you’ll be able to slide safely through Ice Escape.

Even though this game takes place in prehistoric times, I’m fairly certain the laws of physics weren’t different from how they are today. Yet for some reason, the only thing able to stop someone once they start sliding is a wall (among other things). Distance, wind and/or weight never comes into play. Oh alright, so maybe that was just my roundabout way of explaining movement in Ice Escape… I do find it rather amusing though.

Throughout each of the hundred levels, your goal remains unchanged: grab a shiny gold key to unlock the exit and find a way to reach it. Collecting bones along the way is optional, and is only used to determine your level rating. A simple 3-star system is used, with one being awarded for beating the level, one for using the least amount of moves and finally, one for grabbing every single bone. While the system is not tied to progression in any way – beat a level to unlock the next – those who enjoy the challenge tied with perfecting a game will definitely be playing this one for a while. 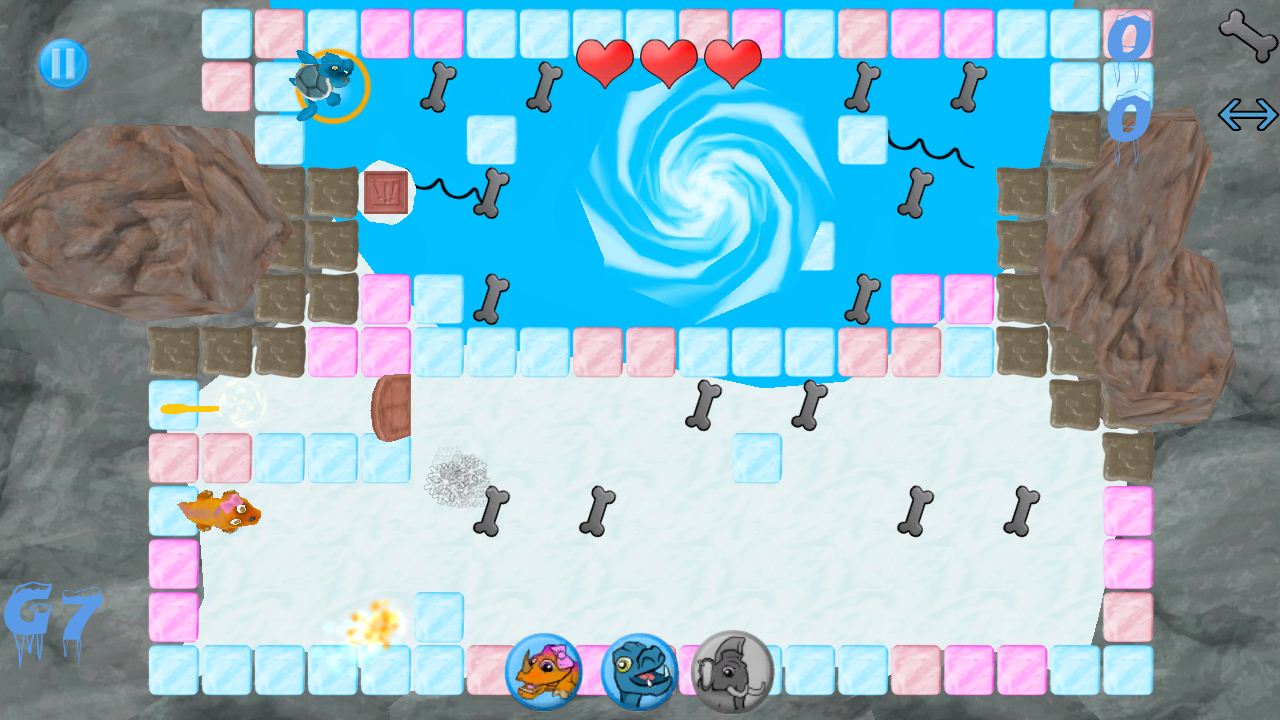 Initially, you’ll only have access to Peter, and chances are you’ll breeze through the first batch of levels as these pose little challenge. Hazards are few and far between, and no environment manipulation is required (or even possible, until you gain access to Mohawk and/or Tori). Ice Escape does a good job of introducing the player to new abilities or features, like how to break or melt certain blocks, but… it doesn’t explain everything in great detail. Not that it has to, mind you, as a little experimentation never hurt anyone; it may kill a dinosaur or two, though (I found out the hard way that whirlpools are rather lethal).

Not every obstacle is dangerous though. You’ll also have to deal with doors that can only be opened by having someone stand on (or slide across) a pressure plate, cause massive environmental changes to create new paths and other fun things. Who said prehistoric times were boring? That said, it definitely ain’t all fun and games, unless you find it amusing to be run over by a train. That’s right: a train! What? Video games aren’t exactly known for being historically accurate. Although if you happen to think otherwise, I’d love to hear an explanation about how certain levels has a human in them, in a time when dinosaurs still roamed the lands? Oh, and he’s got a musket.

If that jerk, or any of the other living and breathing dangerous beings give you too much trouble, why not have the mighty steakosaurus eat the lot? Free one of these from his cage and the favor will immediately be returned, as he clears the level of enemies! Nom nom nom. Ain’t gonna do much good in situations where you’re literally sliding for your life in to escape your pursuer(s) though, so do make sure you free him whenever possible – might even be a reward in it, if you free enough of his kin. 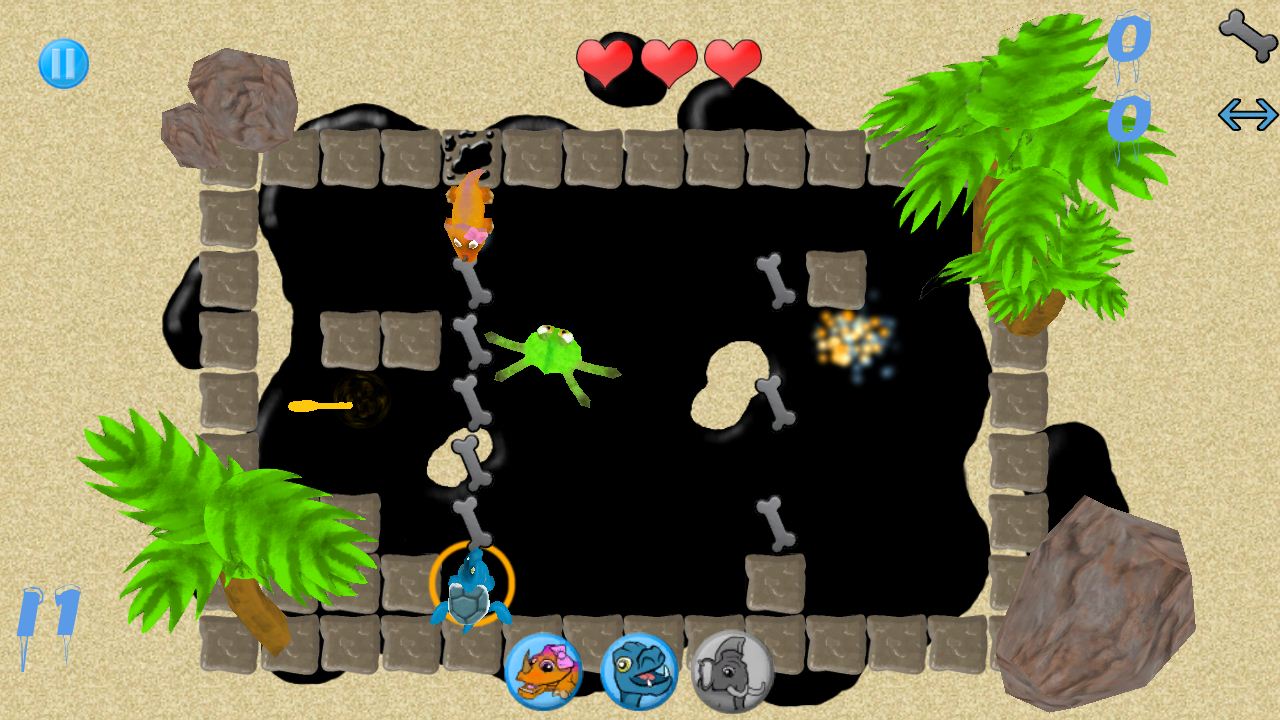 But enough about the gameplay, as I’m sure you’re itching to get your hands on it by now. Well, there’s some good and bad news. The bad news is that you’re gonna have to wait until November, while the good news is that it’s heading for iOS, Android, Ouya and PC (version played for this preview), for free. No ads or IAP, just you and a trio of dinosaurs, attempting to escape the glacier. Perils and adventure await, in… Ice Escape!