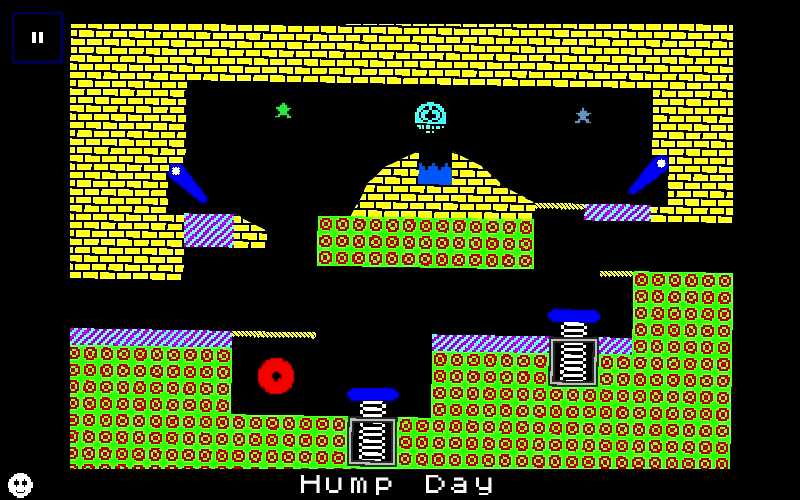 Oh man. Look at that screenshot! Video games haven’t looked like that since the ZX Spectrum days. Yet here we are in 2013, where one Stew Hogarth recently released a game that’s pretty much straight out of 1984, with a curious mix of pinball, platforming and exploration.


In most games, the player controls one or more on-screen characters, running, jumping, maybe even shooting their way through level after level. Stew Hogarth took a different approach with I Am Level. As the name implies, you are in fact… the level. Your goal on each screen (or level), is to collect stars in order to level up your character and unlock additional costumes. It sounds simple enough, but there are all sorts of deadly creatures and watery pits to avoid, as you tilt and tap the screen to reach the stars; those delicious glorious shinies.

No matter how many stars you collect, your progress in each screen won’t be saved unless you clear it. As such, while you can move onto another at any time, it’s generally best to wrap up the current one first. Since there are many areas to roll through and death is never far behind, it’s a good thing that you won’t have to restart from the beginning every single time. Checkpoints, or ‘teleportation chambers’ as I like to call them, act as potential (re)starting locations, allowing you to skip several screens. Just remember: gotta catch ’em all.

Flick, bounce, and roll your character through the bizarre yet stylish world of ‘I Am Level’ in this original mix of pinball and platform game.

Did I mention that one of the aforementioned deadly creatures is a cyan teapot and you’ll have to use pinball bumpers to navigate most of the screens? Oh and springs, because, why not? You’ll be tilting the screen to get the ball rolling anyway, so might as well throw springs into the mix. Navigating can be tricky at first, but after a few minutes you’ll get the hang of it. Also, your lives are finite, and the game over screen – wait, no, mustn’t ruin that.

Those interested can pick up I Am Level on Google Play, where it’ll be free until October 1, 2013. While I’d recommend that version for anyone with a compatible Android device, there’s also a free browser version on Kongregate. Apple fans will have to be patient, however, as the iOS port doesn’t have a release date yet.