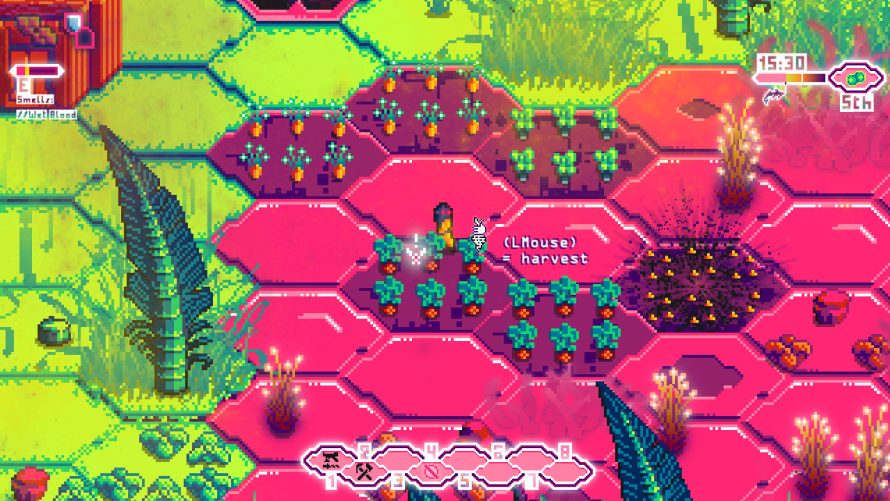 Something must be wrong with me, as I do so enjoy games that start with the protagonist dying. The more gruesome his/her/its demise, the better, too, and I suspect Hyperspace Harvest will rank amongst the best there. Here, the entire planet just… blows up! All is (obviously) not lost, however, for a giant space mammal pulled some reincarnation magic and said protagonist is now in charge of running a farm on its back. Quite the blend of awesome and weird.

Oh, before I forget: while Hyperspace Harvest -- as its name implies -- does focus rather significantly on farm stuff like growing crops and plants, the creation of powerful evil symbiote and weapons of mass destr-- wait, where was I? Oh right. Combat. See, much like in certain other farming games, you’ll have to fight for your right to… well, in this case, eventually get back to a regular planet. Personally, I don’t see the problem with living out the rest of my days on the back of a giant space mammal, modifying my equipment to take on the nastiest of baddies around, playing mini-games to “clear cancerous overgrowth, infected feather trees and mineral crustations” with my multitool.

Explore the different anatomic regions of the whale and fight various diseased cells, constructs and hardlight entities that have turned against their host.

Now, much like in the real world, the clock is constantly ticking here too. Except it kinda isn’t. Not during one of your many dungeon crawling expeditions, anyway, unless you’re clearing a room. In which case, well, it’d be rather silly to have everything pause while you freely move about mowing stuff down. I was quite surprised to find that modifying your gear completely pauses time of day, though. Does that mean we’re to expect a rather complex system, or is it simply to enable easier gear experimentation? We’ll just have to wait and see. Meanwhile, details on certain other tidbits are readily available, like… the fact that “the game constantly tells you the current odor of your surrounding”. Neat, eh?

Hyperspace Harvest is planned for a Steam [Early Access] launch come December 2020. Development updates can be found on Trello.