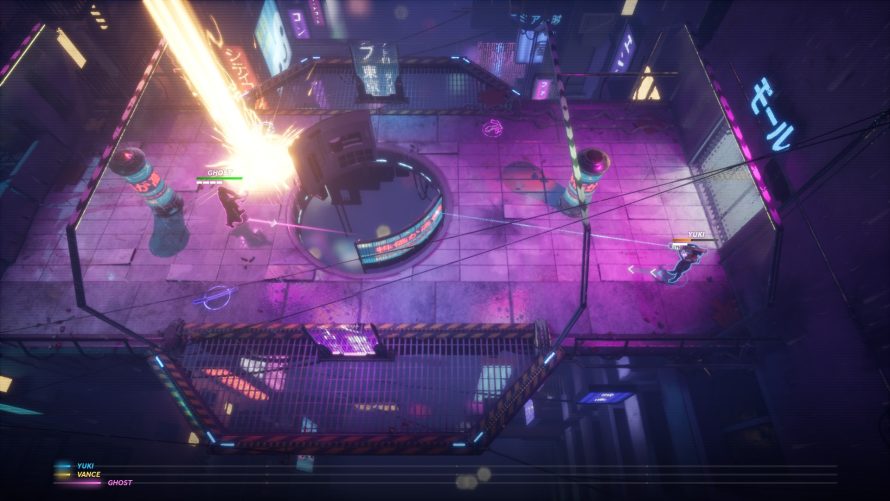 Are you ready to embark on a journey that’ll soak you in neon, fill your ears with synthwave and smear blood all over various batlegrounds as you attempt to dismantle your opponent, aided by a lovely mix of lethal weapons and… perks? Probably not, so in that regard, it’s good Hyper Jam won’t be out for a while yet.

Now, whether online or offline, against other players or AI controlled bots, one thing is guaranteed: speed will kill, just as certain as being too slow will get you killed. Or some such. Also, make sure you pick the right perks after each round, as “more powerful effects” can be created by stacking/combining these, potentially turning the tide of the remainder of the match. Unless your opponents get their hands on rocket launcher that is, in which case, well, run for the hills I guess?

Seriously though, Hyper Jam looks like it’ll be an absolute blast to play, and hey, unlike a certain AAA western sequel… this little indie brawler will actually have private lobbies at launch. Doesn’t mean you’re forced to duke it out across the internet though, as local multiplayer is also available (thankfully so, I might add). Those that do decide to take on the world are going to find another lovely feature which certainly sets this multiplayer-centric affair apart from most comptitors: cross-platform matchmaking! That’s right, PC players will be able to square off against those on Xbox One and PlayStation 4. ’80s fun with 21st century technology. Very groovy.

Hyper Jam will be available on Steam, Xbox One and PlayStation 4, come February 12.

Hyper Jam | Release Date Trailer
Facebook Twitter LinkedIn Pinterest Tumblr WhatsApp Telegram E-mail
Previous article 7DRL 2019 is Right Around the Corner With a Week Full of A-maze-ing Permadeath
Next article Survival of the Species: 'Evolution' Making the Leap From Board to Video Game