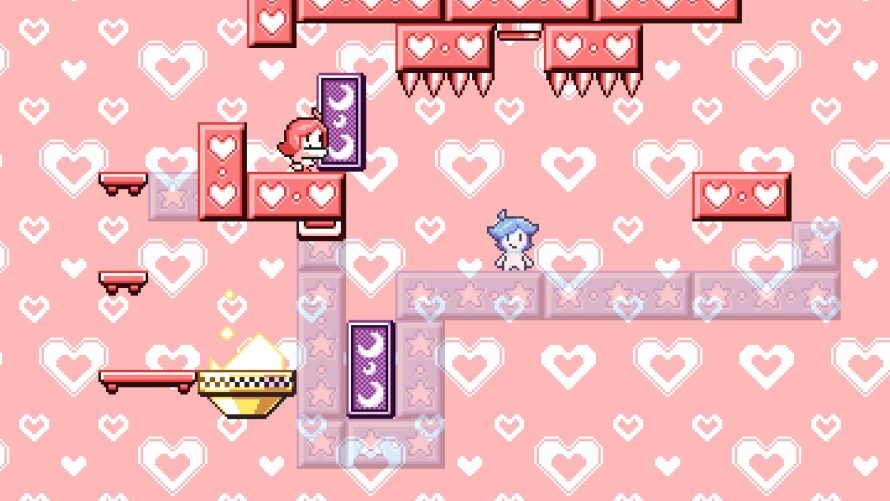 Flip the world! Flip it again and again! It is after all the only way for Heart Star‘s two rather lovely protagonists to overcome, well, just about any obstacle. I’m sure that sounds completely absurd when compared to how our world works, but hey -- video game, ya know? That and… everything is possible with the power of teamwork.

While the concept of having multiple parallel worlds in a puzzle game can easily be a tad overwhelming, in this case, the premise is fortunately kept simple: the blue boy can stand on all things his color (including spike pits) and the same goes for the red girl. Oh, and they can use each other as a makeshift platform of sorts, as depicted by the trailer below. Without the ability to swap between worlds, switching between blue and red being the solid object(s), there would be no way to progress -- as such, this very mechanic is key to getting anything done in Heart Star.

I mean, again, it wouldn’t make sense in our world, being able to pass through a solid object simply because it’s now blue instead of red (and vice versa), but I’m sure it makes perfect sense for our two protagonists. They do after all have no idea that someone else is in control of their actions. Or maybe they do. Well, whatever the case, 60 levels of “mind bending puzzles” awaits, with what appears to be a genuinely groovy “cute retro soundtrack”. So… teamwork ho!