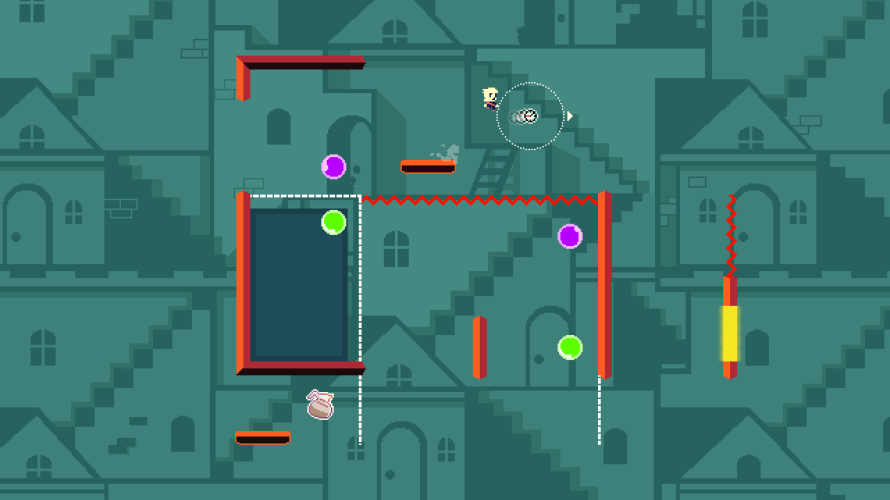 At some point, young or old, most people have tricked kicking a ball around; perhaps even a hacky sack. You know, a tiny round bag filled with sand used to show off by… well, keeping it in the air… I think. It’s been a while! Anyway, HackyZack is a lot like that, and yet at the same time, not really. Upon stepping into the shoes of its protagonist, Zack, you’re tasked with juggling balls to, well, fill a book of stickers. Why? Oh, he needs it to unlock stuff (in the game). Groovy stuff. Stickers! Balls! Platforming!

Ah, but you see, these are not ordinary balls, in that each possesses a unique property. As for exactly what each does… well, that’s for you to discover, although I will say that the majority of balls bounced around in HackyZack are part of the platforming. By which I mean that you won’t be able to complete many, if any, levels without incorporating that little round object into your ‘route’, as it were. Either as a movable platform, brick breaker or something else entirely, do not underestimate the hack – I mean, the… HackyZack?

HackyZack began as a prototype in late 2014. The team decided that HackyZack deserved an upgrade and now includes plenty of new mechanics, polish, a fresh art style, and a unique, original soundtrack.

Based on the trailer (below), levels seem to be confined to but a single screen, although you’d be foolish to mistake that for a simplistic experience, as a quick glance reveals some serious precision platforming in pretty much all of them. Heck, there are even challenge levels for those who enjoy racing the clock, and new characters to unlock – all through the power of stickers. Get to kicking and start collecting!

HackyZack is available from Steam, Humble carrying a $10 price tag.