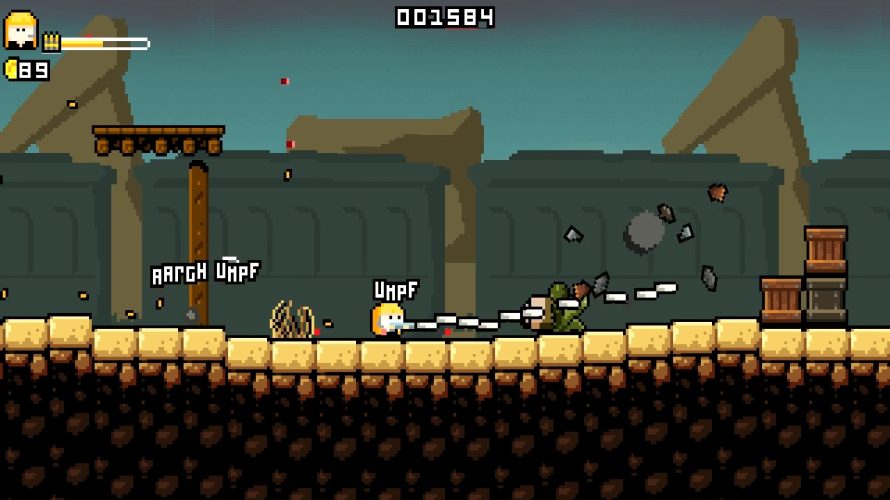 You’d think the Black Duck Army would have learned their lesson the first time around, ya know? But unfortunately (for them), they’ve decided to try their luck once more. Not an entirely bad thing, mind you because we’d probably never see a Gunslugs 2 without those jerks. Oh, did I mention how awesome its demo is? Because… well, it is, and very much so!

Like the game itself, the demo is a genuine blast from the past. Not only does it take place in the wild west, with crazy trains, pointy cacti and giant robots (no one said the was historically correct…), the gameplay is also straight out of a time long gone: move left and right; jump and shoot – that’s about it. There are weapon power-ups too, although it seems only the Two-Way – which lets you fire in both directions at once – is featured here. Also, shops, since money ain’t worth jack if there’s nothing to spend it on.

The demo takes you through the opening scene, first world, end boss and includes the train crash, so it’s a nice little slice of Gunslugs 2 action.

Fairly certain the limited available power-ups are due to fact that the demo is from a work-in-progress build, because everything else worked great; from gunning down bad guys (and giant robots) to toppling towers by triggering a box of TNT at the top, and of course my personal favorite: driving around in a tank. “KABOOM!” went the tank… and much carnage followed.

That said, I never did make it through the demo, but maybe you’ll have better luck? The only thing required to run the Gunslugs 2 demo is Java (and a semi-decent rig), meaning it’ll work on Windows, Mac and Linux alike. Full version is headed for a January 2015 release, so let’s see if can’t get it through Greenlight before then, eh?