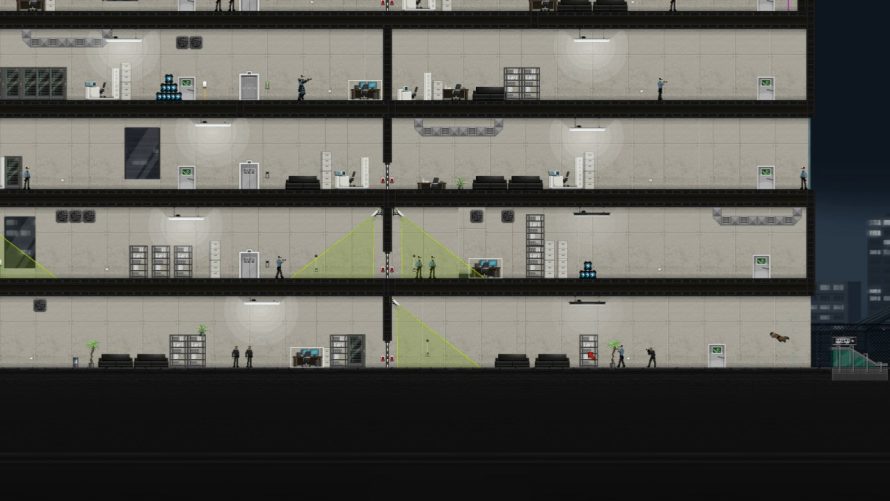 To say that this has been a long time coming would be a huge understatement. Not that the lack of Steam Workshop meant fans were unable to share their Gunpoint creations, but let’s face it – the less hassle, the better. On top of that, the game is powered by GameMaker Studio now(as opposed to GameMaker 8). Something which, among other things, should make for an overall smoother experience.

Seeing how I beat Gunpoint for the first time a few days ago, the experience is still fresh in my mind, including the overall game performance. That said, not once did the game stutter or drop below 60 FPS for a split-second, although I suspect those on low-end hardware will notice more of a boost. Maybe. Maybe not. The engine switch has another benefit though, in that it lets Suspicious Developments get started on porting the game to Linux and Mac.

The level editor has been in there since launch, but some people still ask for one so I’m just going to keep announcing I’ve added it until everyone knows it’s there.

Considering the amount of potential for chaos a game like this packs, it’s great to see so many levels (70 at the time of writing) readily available in the workshop. Not playing the Steam version? Don’t worry, the Gunpoint Levels repository is overflowing with fan-made fun! Time will tell whether there’ll be many new submissions there in the future, now that Steam Workshop has been patched in. I for one hope fans will keep supporting it though, because… DRM-free gaming is awesome. Note: currently, only the Steam version has received this update, but they’re working on the rest as you read this.

Gunpoint is 75% off ($2.50/€1.75) on Steam and the Humble widget for another 28 hours at the time of writing. Windows only for now, but remember, Mac and Linux ports are coming, and I highly doubt it’ll be this cheap again soon.