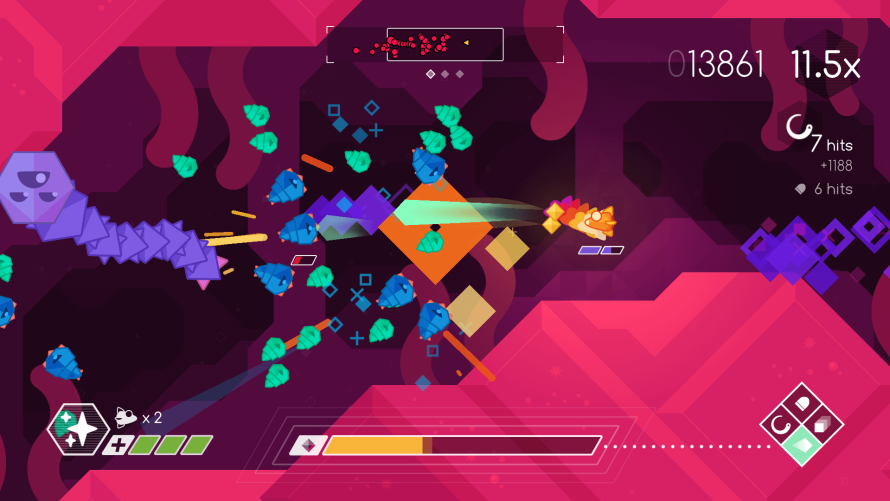 Graceful Explosion Machine. Is it simply the name of a game, or perhaps something more? Spoiler: it’s that AND the name of the ship you’ll be piloting in said game. Oh, and according to the developer, it packs a “ludicrously overpowered quad-weapon array”. Which, if you ask me, means it’s already a pretty darn great shoot ’em up experience. And then there’s the colors… the music… so groovy. So relaxing. So very… EXPLOSIONS!

I’m sorry, where was I? Oh right, Graceful Explosion Machine. It’s hard not to immediately want to play this one, based on naught but on the trailer below. For me anyway. If you’re still reading this, chances are you’re gonna need more convincing. So… how about motivation for shooting everything in sight? And I’m not just talking about the fancy explosions either, for while those are undeniably pretty, you’re actually trying to get somewhere. Also, unlike most side-scrollers of its kind, this one actually lets you go right and left! A nice change from your typical screen-is-constantly-moving-so-try-to-keep-up genre entry.

The GEM fighter is the most advanced single pilot fighter in the galaxy, offering precise controls, nimble movement, and devastating firepower.

So, if you’re able to survive its 30+ (because an exact number would be spoiler-y?) levels, taking on an entire alien armada all by your lonesome, you just might be able to make it home in one piece. Or several. Depending on the state of your ship after all that fighting. I mean, the game is billed as a “blisteringly intense side-scrolling arcade shooter”. Not “brutally difficult”, no, this is a whole ‘nother level of challenge -- the “blisteringly intense” kind. But seriously, expect stiff opposition from this alien -- one race or other -- armada. Competition just waiting to be mowed down by a variety of weaponry. Shoot first, ask questions… never?

Graceful Explosion Machine will be available on Steam, PS4 come August 8 -- out on Switch right now.