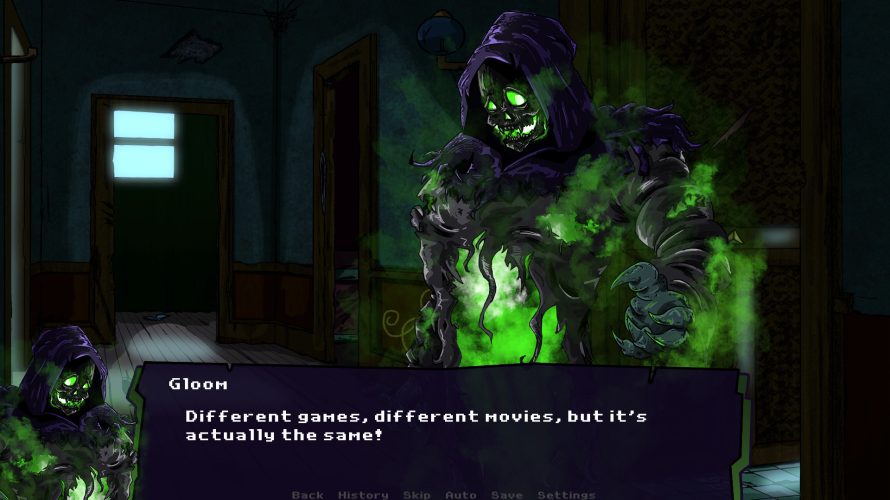 Eternity is a really long time, and something tells me the 400 years Gloom, an ancient wraith, has spent killing demons is starting to feels like such – a neverending story as it were. One might ponder exactly what made him embark on this rampage, and the answer is surprisingly simple: to be permitted a return to Heaven. His final task, to kill Wynona, a troubled young girl convinced she’ll bring about the end of days, shouldn’t overly difficult. Except Wynona has an uncanny ability to escape death, no matter the cause. What’s everyone’s favorite ghastly green ghoul of Gloom and Doom fame, to do, then?

A whole lot, as it turns out, over the course of this choice-driven tale that blends 90s humor and pop culture references with more than a little fourth-wall-breaking, and… well, there’s no ignoring the fact that the story does get rather dark at times. We are after all dealing with a demon-slaying being tasked with ending the life of a girl who’s barely begun living, just so he can get back into Heaven. What a selfish punk. Or that’s how I would describe Gloom, if not for the fact that – wait, did I mention how he absolutely loves Genesis? No, not the band. The console. Actually, probably the band too. He’s been kicking demonic you-know-what for several centuries after all, and music did come up several times before the credits rolled.

Anyway, given his affection for 16-bit classics, surely he can’t be genuinely bad, right? Yeah… maybe he is. Maybe he isn’t. Yes, I’m being intentionally vague here, so as to not spoil more than absolutely necessary, because this is definitely an experience best enjoyed with as little prior knowledge as possible. Even more so given its choice-driven nature, complete with no less than seven different endings. It took me around five hours to wrap up my first journey with Gloom and Wynona, and once this review is published, I’m definitely going back to explore every other possible outcome. What can I say? Sometimes, a bit of Gloom and Doom is just what the doctor ordered. 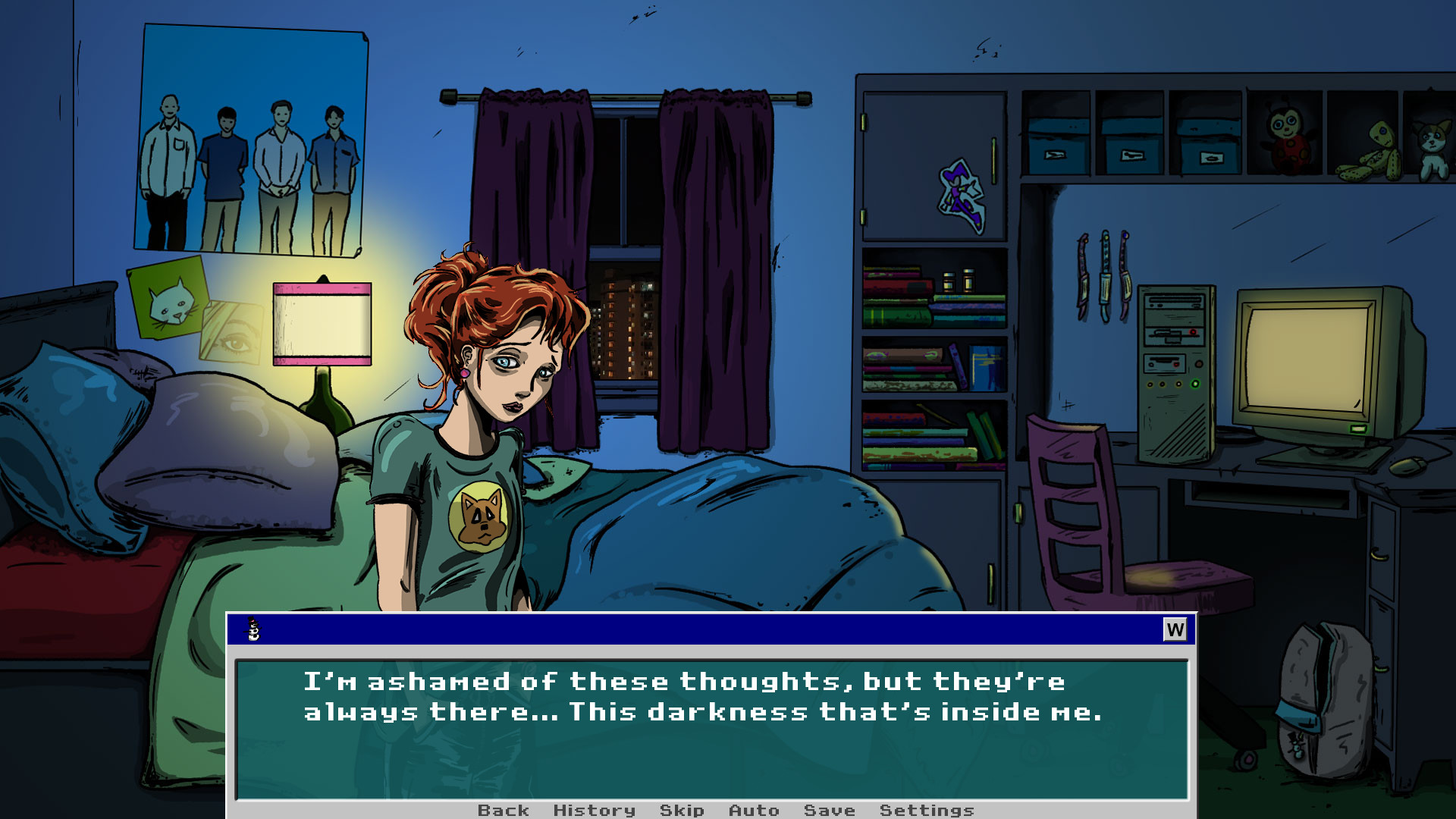 But I’m getting ahead of myself, for Gloom is only one half of the main cast, and believe it or not, Wynona is actually almost more depressing than him at times. Then again, if you were haunted by a looming sensation that you’d eventually bring an end to life as we know it, becoming the Doom Bringer, chances are your outlook on life would also be more than a little… gloom. An indescribably heavy burden for one so young to bear and in Wynona’s case, sadly, it’s far from the first time fate has dealt her an awful hand. So what’s a girl to do? How does one go about preventing a prophecy from coming true, when it involves oneself wreaking havoc and creating a literal apocalypse? Unsurprisingly, this is where the content warning for Gloom and Doom rears its ugly head (because of the topics/themes far more so than their implementation in the visual novel). In case you hadn’t already guessed it from my mention of Wynona’s ability to escape death, well, she’s determined to cancel the end of days by ensuring she doesn’t live to make it happen.

Obviously not the ideal solution, but desperate measures and all that, you know? No. There’s no way that’d fly, and while the story does cover topics like self-harm and suicide, thankfully, it never veers too far in that direction so as to avoid becoming a depressing nightmare (akin to those Wynona’s been experiencing). The frequent sprinkles of humor and witty banter between not only Gloom and Wynona but also every other character – of which there are surprisingly many, each getting plenty screentime too – helps maintain a steady balance of light and darkness; much like the story itself, actually. That said… if you don’t enjoy or at least remember the late 80s/early 90s, a lot of the jokes are going to fall flat. That’s just how it is. 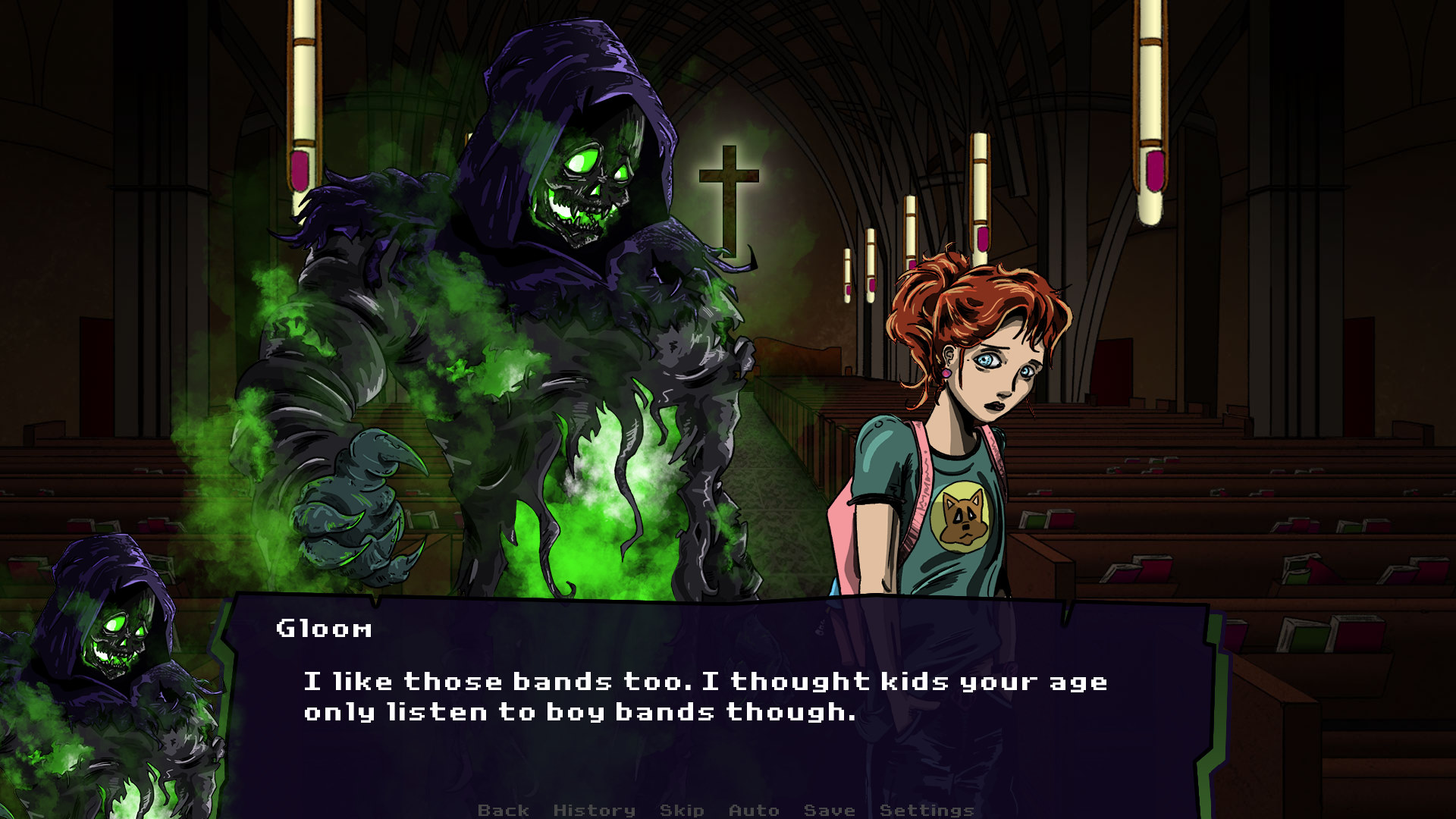 As someone fortunate (yes, really) enough to be a teenager in the 90s and a crazy old coot who still thinks the 80s is the best decade for music – closely followed by the 70s – needless to say, I had an absolute blast with these. Even the handful of obscure lyrical references that I doubt many my age would get made me smile. Doubly so because of their timing, often coming crashing through the dialogue box at just the right moment, reminding the player that it doesn’t matter who or what you are – demon, angel, human, cat, dog, old, young, male, fema – you get the point – music is a universal language.

Apparently, that also goes for English, as everyone speaks it here. Oh, stop rolling your eyes at the screen – I am joking, obviously. I know perfectly well that the angels and demons have their own ancient language and my brain simply interpreted it as I read each line of dialogue. But seriously, getting back to the story for a moment: have you ever wondered whether there is in fact more between Heaven and Earth than are dreamt of in your philosophy? Reading (or trying to, rather) Shakespeare didn’t put such thoughts in my head, and neither did playing through Gloom and Doom. So why bring it up? Well, in a few ways, this particular tale of how the needs of the many just might outweigh the needs of a few (or one, in this case) did give me some food for thought, and in no small part because of its supernatural (and/or religious) elements, angels and demons clashing and such. So there, Heaven, Earth, in-between. 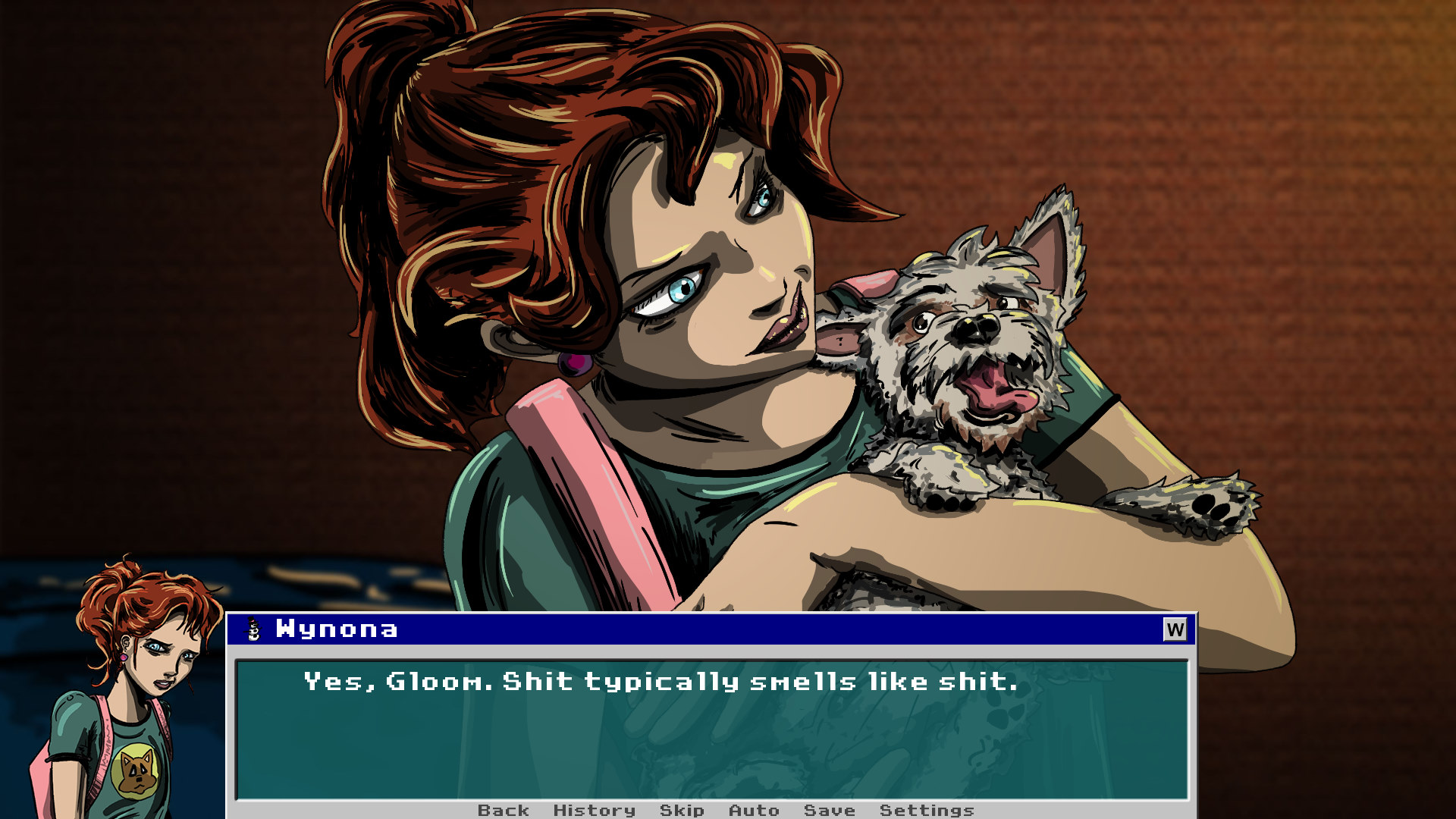 Wynona’s troubled life is after all one I’d wager many can relate to, even if only in a small way, and the level of determination Gloom shows in his attempt to atone for his sins is also quite relatable. We’ve all made at least one bad decision in the past after all. Comes with being human. We’re a flawed race. Unlike Gloom, however, we don’t exactly have immortality on our side, giving us only a limited amount of time to hopefully make things right again. Because of this, every moment carries significantly more value than someone for whom time has all but lost its meaning. Wynona, on the other hand, is almost too human: fragile and driven by emotions with a limited lifespan.

Throw an unhealthy chunk of depression on top along with, you know, that aforementioned prophecy… and you’ve got a truly broken soul. This most certainly begs the question: is Gloom – a wraith who mostly kills demons, plays video games, and enjoys more than a few old movies – really what Wynona needs in her life right now? Maybe he is. Maybe he isn’t. One way to find out. 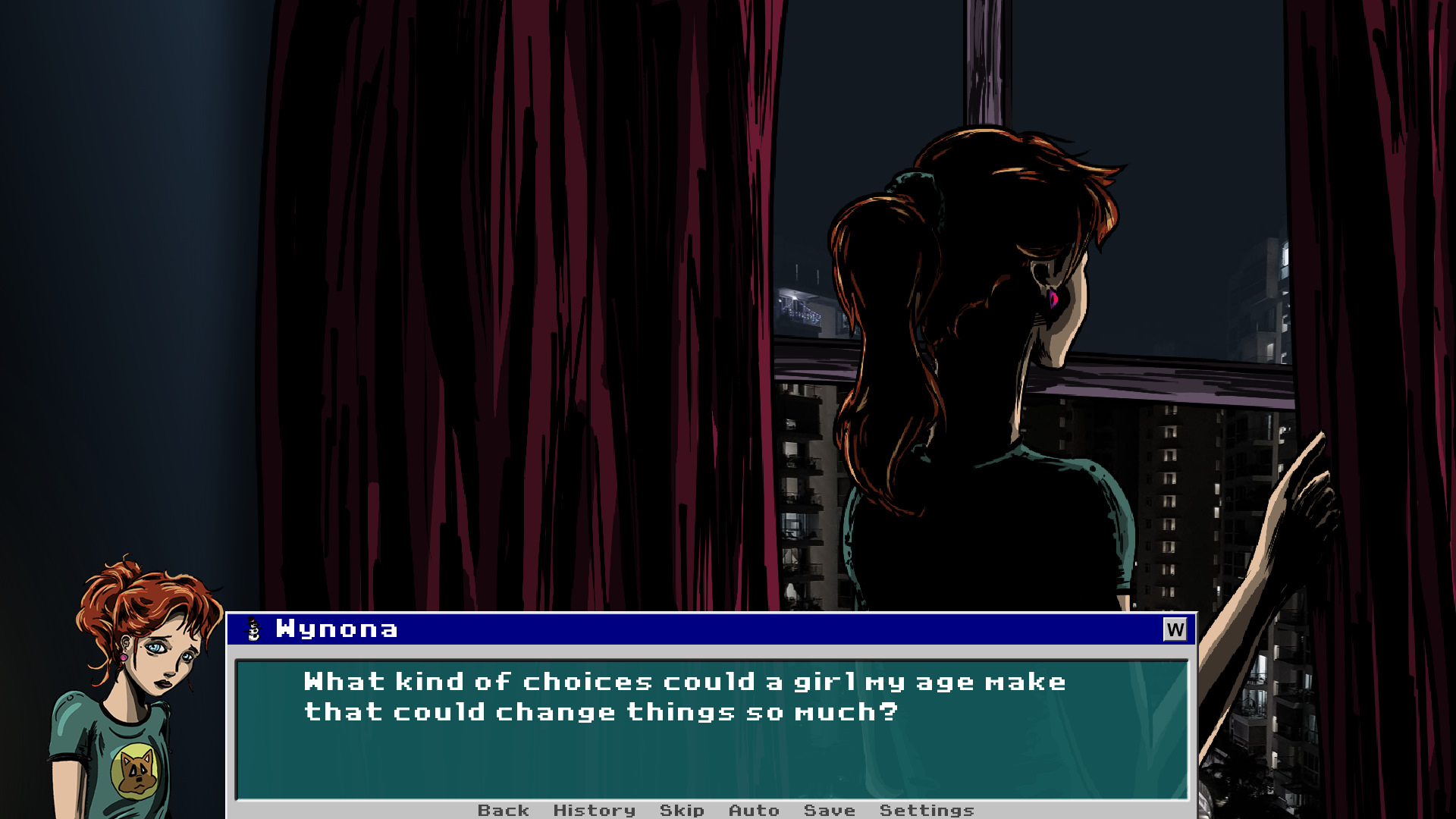 What? No, I don’t mean ‘by having me spoil the whole thing in this final paragraph’. Sheesh! That’s not how reviews work. Ah, speaking of which, this is where I’d normally put the tl;dr version for those who fancy skipping all but the final paragraph. Sorry, not this time. My opinion of Gloom and Doom, like the game itself, is best experienced without skipping ahead, and so it shall be. I have spoken.

Gloom and Doom is available on Steam, carrying a $19.99 price tag.