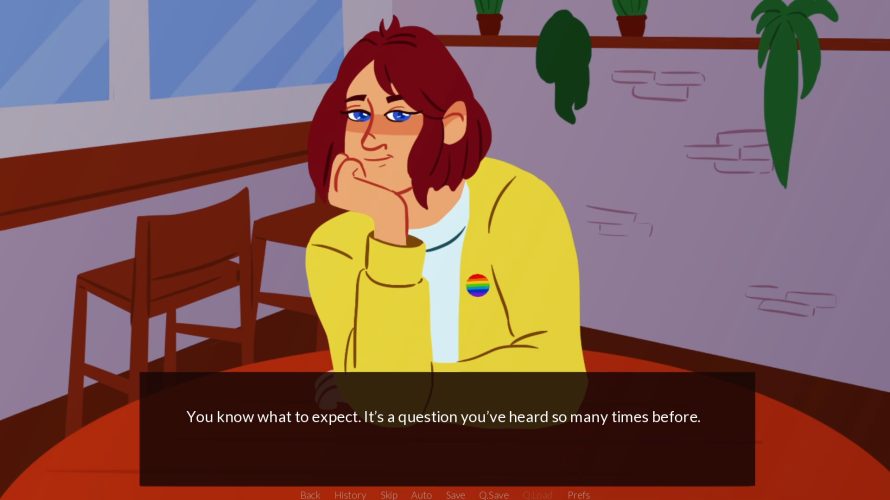 Gender identity is an uphill battle for just about everyone who does not feel rightly defined as male or female and why is that? Why are we, as a society, so set in our ways that in spite of definitions frequently changing, gender identity – outside of the two most common – remains a taboo subject? generic nonbinary game might help shed some light on this very matter through its portrayal of a date as a nonbinary afab person.

Going on a date can be downright nerve-wracking. You never quite know what to expect as more and more details are shared between the two of you, and there’s always going to be something that could potentially create a bit of a road bump. Maybe your date will understand, perhaps even accept whatever caused their expression to change from a smile to a frown, and talking about it just might actually end up helping. Unless it doesn’t.

In generic nonbinary game, your date is… well, let’s just say that the ‘misgendering’ content warning on the game’s page is there for a reason. Doesn’t take long for her to start asking about your identity, and through a series of choices, you’re able to somewhat control the conversation, leading to one of two different endings, complete with visual changes, likely indicating the state of mind of the protagonist at any time.

For just a few minutes, step into the shoes of a nonbinary afab person.

No matter how you choose to respond, the date will be brief, and yet I actually found myself pausing to examine what I had just experienced upon reaching each conclusion. And I don’t mean because I wasn’t sure what to write in this review either.

It just absolutely boggles my mind whenever I see people put in a negative light for something they strongly believe in that is in no way harming anyone else, or themselves for that matter, no matter the media portraying it (and even more so in real life). We have standards, rules, laws, but let’s face it – a lot of them are horrendously outdated, not once revised in spite of desperately needing an update for modern times. So why not start with eliminating that overwhelming archaic belief in binary gender identity? Why not indeed.

All in all, no matter how you feel about nonbinary people – or LGBTQ+ in general, for that matter – I’d recommend spending the ten or so minutes it takes to experience everything generic nonbinary game has to offer. Who knows, perhaps this visual novel might provide you with some food for thought as well?