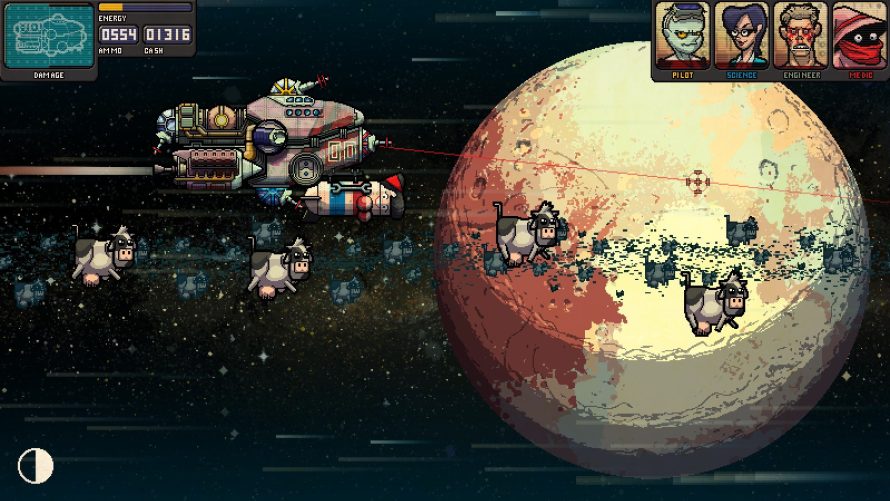 Bombs. Bombs are strange, volatile concoctions. Unfortunately for you, it is also the cargo you’re tasked with transporting in Fission Superstar X. No, I am not joking. Stop looking at me like that! Right. Anyway, it all started when a certain Dr. Leopold had a revelation… but surely you don’t care about any of that, so let’s move on to the part where you fend off attackers with a mighty spaceship in this peculiar roguelite.

It will be a perilous journey, there’s no way to avoid that, and chances are you will die many times as you attempt to travel from Planet X to Earth. That’s right, Earth. Oddly enough, it actually hasn’t been blown up by intergalactic war (yet?) in this game. That’s not to say you won’t have the equivalent of a small army to deal with though. In fact, chances are you’ll be dealing with an even larger amount of hostile forces, because -- well, I did mention you’re transporting a celebrity, right? A celebrity bomb. Yeah. It doesn’t really make sense to me either.

Saving the universe is common, there is nothing of that sort here, it’s just an absurd quest for nuclear celebrity.

What does, however, is the awesome action depicted by the trailer below, you-know-what blowing up left and right as you make difficult choices. Like, you know, should you repair the part of your ship that somehow managed to catch fire, heal an injured crewman, or simply lie down on the floor, hoping your enemies will ignore you? Alright so one of those is not possible, but I’m sure you see what I’m getting at here. Oh, and with a myriad of different crewmembers -- which include space bears, I might add -- and sixty-four different weapons, you should be able to find someone/something for the task at hand. Best of luck, in Fission Superstar X.