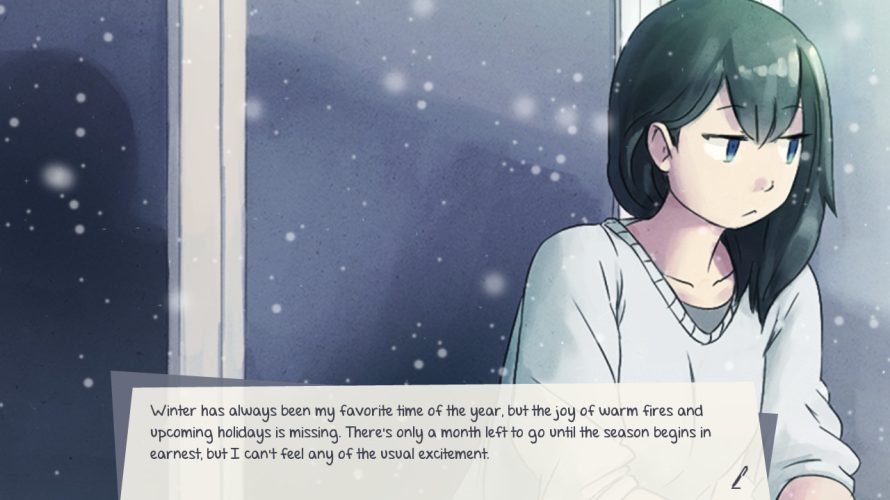 It’s not often indie developers release the source code for one of their games, even ones that – like First Snow – are readily available without a price tag. Because of this, upon seeing this tweet, I knew this was something worth writing about. And modifying. And translating. And learning from. Oh right, I’m referring to the source code with those last few bits. Ahem.

See, on top of being able to explore and find out exactly what makes the prequel to the yet-to-be-released visual novel, Twofold,  First Snow, tick… there’s so much more one can do with the source code. Modifications and translations, as already mentioned, come to mind. Do keep in mind, however, that while the game uses the Ren’Py engine, a ‘semi-custom script system’ called RABBL is also part of the equation. Plenty of details available on the GitHub repository, and as always with these things, I’d rather just point you in that direction than attempt to decipher it all.

This is the source code for First Snow. It is released in the hope people can learn from it, make translations, and modify it to their needs and wishes (with the license conditions in mind).

That said, one more thing to keep in mind before you delve into all the 1s and 0s in the First Snow source code: it has been licensed under the Creative Commons BY-NC-ND 4.0 license, to ensure certain restrictions are put on any and all distribution of whatever one might end up creating with it. A way of ensuring availability, while also keeping shady characters at bay – the kind who might attempt to, you know, profit from other people’s work. Don’t be that guy/girl. No one likes that guy/girl. Not even that guy/girl. Have fun with the code while respecting the creator(s), and everyone gets to have a good time.

First Snow is available for free, either directly from the developer, Steam, or itch.io.