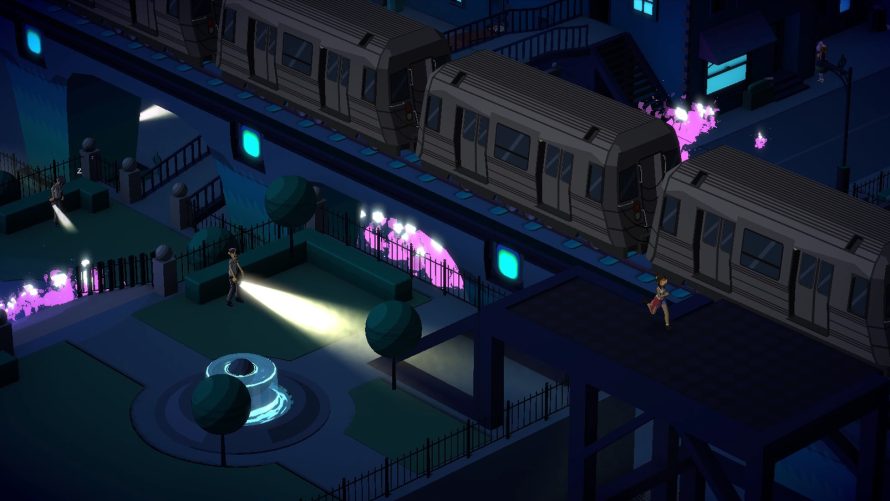 Welcome to the year 1990. Forget about iPhones and other fancy technology in Fire Tonight. This was a much different time, and unfortunately for Maya and Devin, it is also one during which fate has decided to truly stir the pot – by setting the town ablaze! Can the two be reunited before everything goes up in flames?

I should certainly hope so, but seeing how the game is still quite a ways off, for now, best we can do is keep our fingers crossed as I try my best to explain just what the game is about (aside from reuniting its two protagonists, of course). See, while you will be in charge of both characters, only Maya is able to run around outside, as Devin will be staying in his small apartment, anxiously awaiting her arrival. Which is probably the best course of action, given the current state of affairs; fire bad and such.

Traversing a city on fire is no easy task, however, as police barricades, traffic jams, the spreading fire and who knows what else has to be avoided. But with a little luck and careful maneuvering, the train, rollerskates, rooftops, perhaps even a car or two, should do the job of getting her through this hazardous inferno in one piece. Needless to say, a time like this is the exact moment for old memories to resurface, and Fire Tonight is no exception to that rule, both Maya and Devin thinking back on all the things they’ve been through, how they met in the first place, and what lies ahead. Memories – of the positive variety, at least – can provide an immense boost during trying times such as this, so if there was ever a time to think back… this is it.

While awaiting Maya’s arrival, explore objects imbued with powerful memories as Devin to learn more about the couple and what’s driving them together in this trying time.

Although while Maya is making a mad dash through town, Devin is holed up in his apartment, going through mementos to help him reminisce, in an attempt at maintaining some degree of sanity, in spite of him obviously being worried about his better half. Remember, this was before cellphones, so no “I’ll be there in five minutes!” calls from the car/train/rooftop. Instead, all the poor guy can do is sit tight and await her arrival. Which, you will be in charge of ensuring. So eh, don’t mess up, ya hear? Their happiness (and future) in Fire Tonight depends entirely on your success!

Fire Tonight will be on Switch and Steam, come Winter 2021.