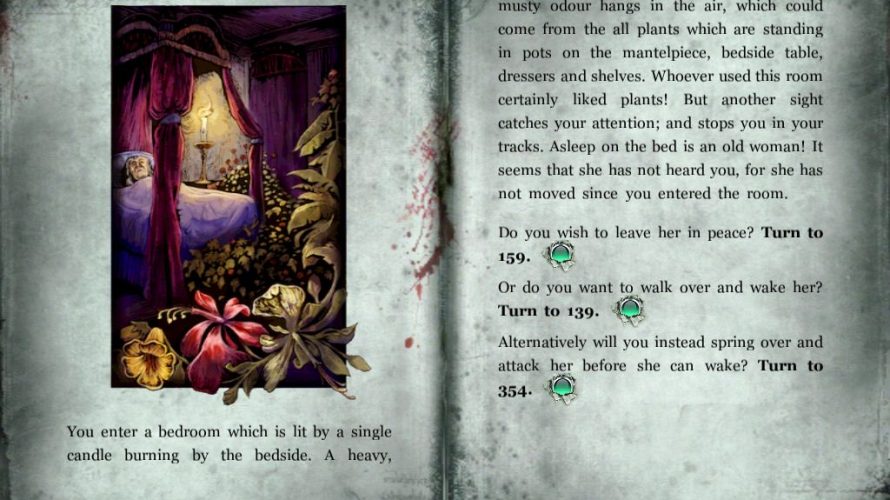 Like so many other classic horror tales, this one takes place on a dark and stormy night. On your way home, fate decides to intervene by sending your car into a ditch. Seeing how the nearest garage is out of walking distance, your best bet is to head for the old house just up ahead. If only you knew what that place has in store for you, that… House of Hell.

In this digital choose-your-own-adventure from the popular Fighting Fantasy series, you’ll be dealing with some of the most terrifying creatures imaginable. Don’t believe me? Well, in this book/game, fear can actually be the cause of your untimely demise! Surely you did not expect otherwise, given its eerie title?

For those not familiar with this particular style of game, it can best be described as an interactive book with RPG elements. Your skills in combat, your luck and the strength of your psyche (remember that bit about fear being lethal?) will all have been put to the test, by the time this night is over. Whether or not you actually live through it, well, that depends on the choices you make along with the roll of the die. 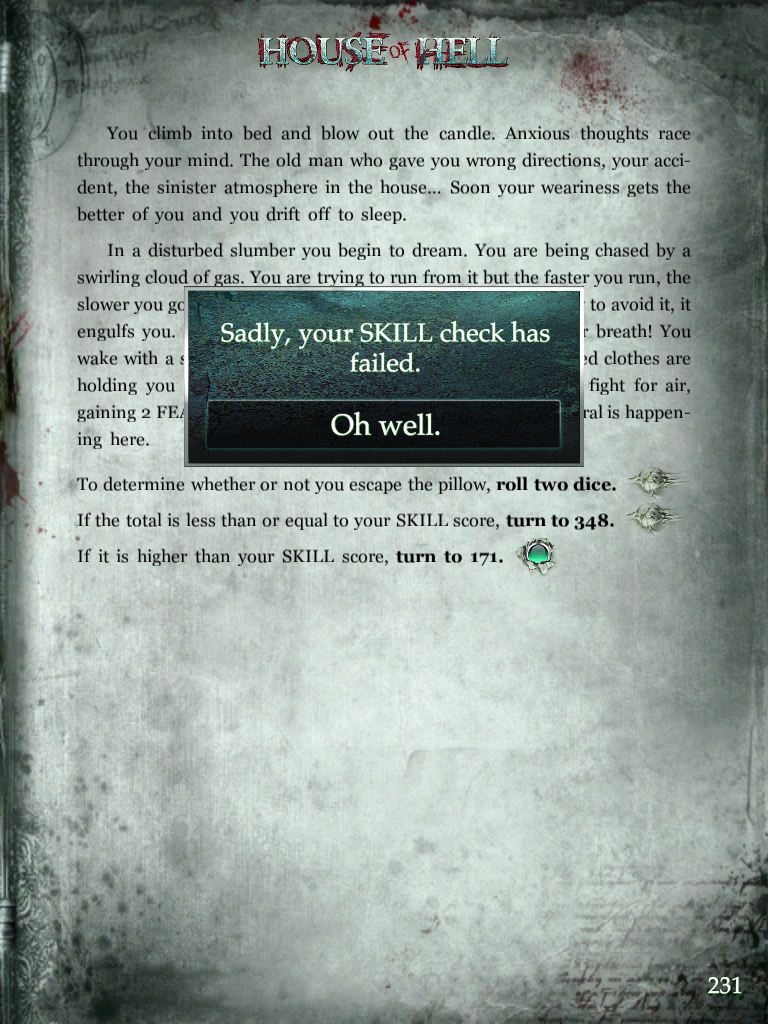 Unlike most other RPGs, you’ll only be dealing with a few stats and a limited amount of items here. Skill (fighting ability), stamina (maximum health), luck and fear define your character. “Nice and simple”, you say? Sure, until the dice lands unfavorably and something bad happens. But alas, such randomness is part of the experience, however annoying; just like in the original which is exactly what you’ll get with this digital adaptation – almost.

See, apart from some additional (note: optional) features, this is pretty much the classic hard-as-nails House of Hell gamebook turned video game. Awesome, right? You bet ya! The randomness of dice rolling and other ‘annoyances’ that were part of the original experience may not be to everyone’s liking, but me, I’ll take that any day, over some odd adaptation which completely strays from the source material.

Anyway, when you’re not fighting for your life or testing your luck, there’s a huge house just waiting to be explored – unfortunately, it’s one that plays host to the strangest and most terrifying things. Between the mazelike corridors and secret passages that hide only God knows what; suffice to say, roaming its dark halls is anything but safe. Unfortunately for you, these are actually the only way to proceed if you feel like actually leaving this place in one piece. That is what you want, right? Of course it is. 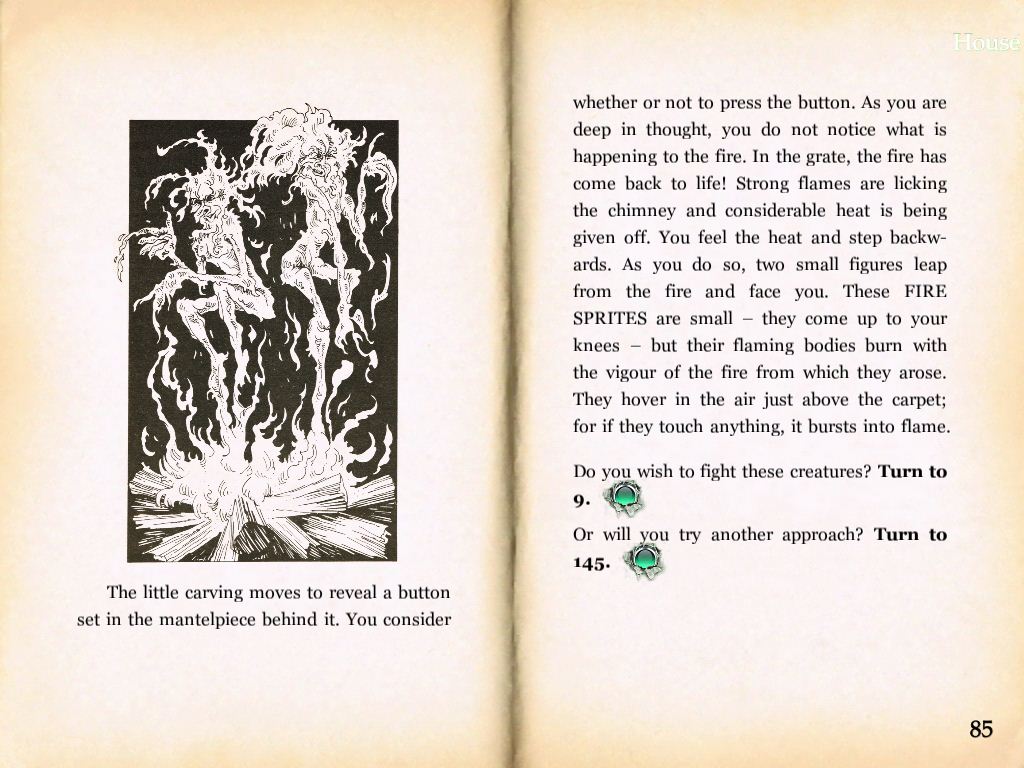 Navigating the book itself is a simple matter however, as it’s divided into small sections, each with several choices on how to progress. For the most part, there’s no easy way to tell which path allows you to continue and which leads to an event that will instantly end your adventure. There are times when common sense is applicable, however, even if these cases are few and far between.

What annoys me most about this isn’t so much that the player can easily wander right into a death trap. That’s fine. But ending up somewhere that, no matter which choice you make next, sends you on a one-way trip to Hell while still giving you several options? Not cool. Chances are that’s just how the house was designed though… to ‘play’ with its prey, leading you to believe everything’s fine when your fate was actually sealed several minutes (or choices) ago. Man, talk about sinister. 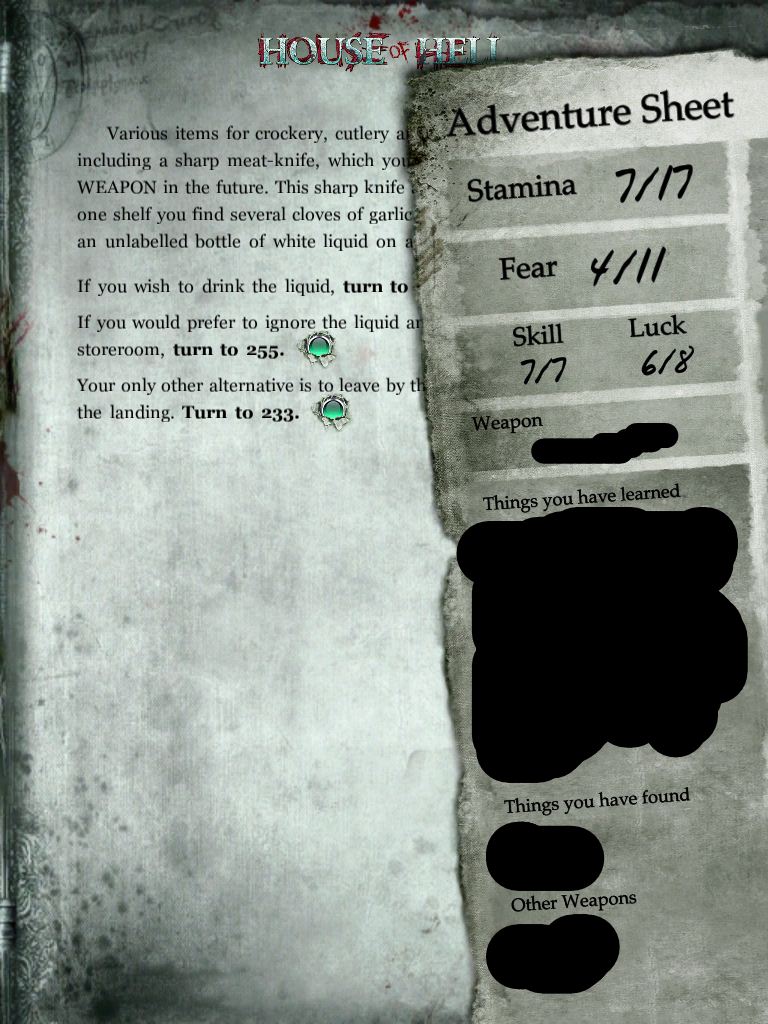 Now, those familiar with the Fighting Fantasy series roots may remember how in the printed version you had to manage a character sheet, keeping track of important information/locations by hand and such. Here, all that stuff is handled by the game, leaving you to enjoy the experience with less hassle. Having played many choose-your-own-adventure books in my youth, let me tell ya, this is a huge timesaver.

It does also mean that you won’t be able to cheat your way through tricky dice rolls though. Not that you’d actually do that, given the option, right? Right. Anyway, along with its lower price tag, there are several advantages to playing this version over the original; provided you have an iOS or Android device that is. For starters, being able to bookmark your current location is the equivalent of saving your game; something I found incredibly helpful, considering the amount of potentially lethal situations.

You also have several different difficulty levels to choose from: hardcore lets you play how Steve Jackson, the author, intended, medium gives your stats a slight boost and ‘free read’ is pretty self-explanatory. Still not satisfied? Well, how about being able to change between the original look and one sporting greater detail (as pictured above) then? Yeah, that’s what I thought. The font can also be tweaked, something I’m sure those not playing on a tablet will find useful.

So with all those fancy changes/additions, surely something must have been changed for the worse, right? Honestly, not as far as I can tell. Pages are easier to navigate, no need for a pen, paper or dice, and the adventure is as challenging (hardcore) or easy (free read) as you want it to be. Everything else is just as fans of the original remember it, in good and bad. 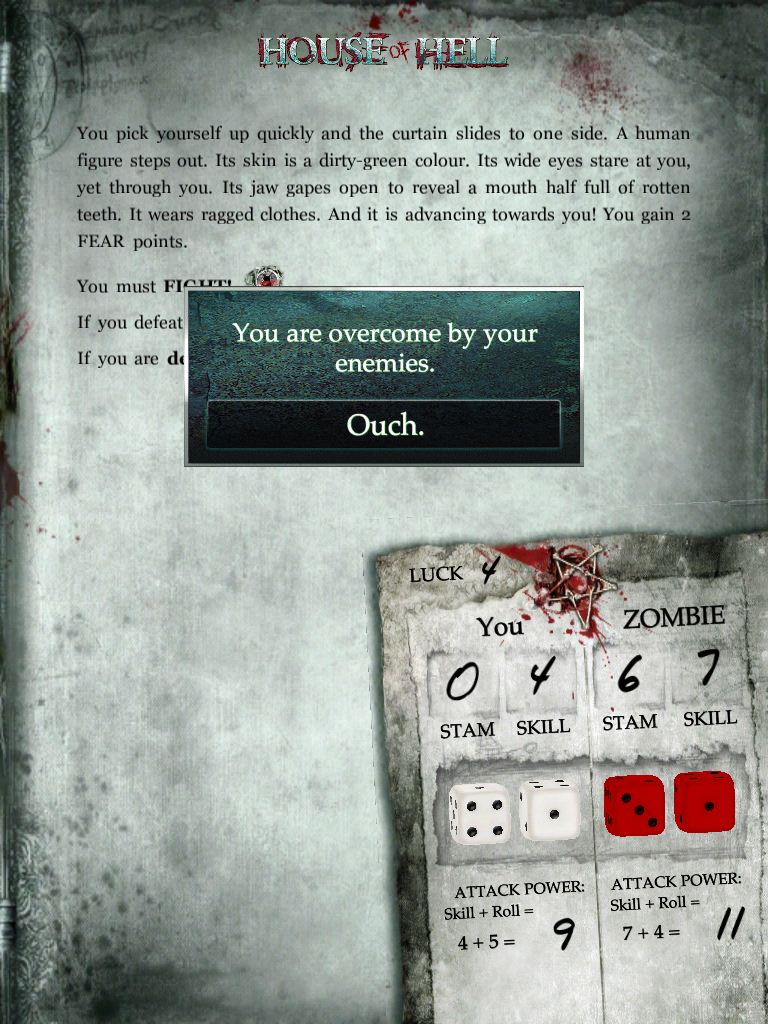 While the new features easily make this the definitive version of House of Hell, it is by no means perfect. That said, the problems I have with it, however few, are in fact highly subjective, and most can be traced back to the original version. Navigating the house without any sort of map can be incredibly frustrating, when your options consist of “turn left, turn right or go back” several times in a row. At one point, I almost expected a minotaur to appear before me!

But in spite of that, and even with the many ‘oh look, something killed you – again!’ scenarios in mind, I’d still recommend Fighting Fantasy: House of Hell. Carefully consider each situation before deciding on how to proceed, pray to Lady Luck before rolling the dice, and maybe, just maybe, you’ll actually live to tell the tale.

Fighting Fantasy: House of Hell will set you back $5.99 on Android (Google Play) and iOS (iTunes).