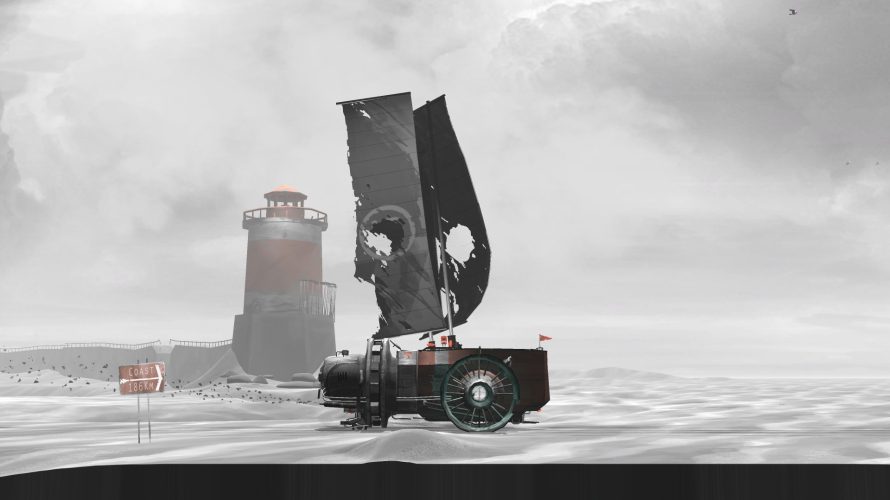 Adventures, while often wildly different in nature, all have one thing in common: it’s either about the destination – or what may be found there – or about the journey (what happens during, and such). In FAR the focus seems more on the latter, as you traverse a desolate wasteland, maintaining your vehicle each step of the way while weathering storms and pitch-black nights alike.

As for where you’re going or why you’re even on this particular trip, no one knows. In fact, figuring that out seems to be a core part of the experience, as the developer has yet to let any specifics slip. Well, save for the fact that this place, once upon a time, was full of “buzzing island settlements”, all of which sadly lie in ruins now. Or do they? Perhaps there is treasure to be discovered, uncovered, recovered? Again, no one knows.

Challenging yet intuitive gameplay and gorgeous audio-visual design blend together into an intriguing game experience leaving you relaxed, yet with a certain urge to pack your bags and just take off into the unknown.

One thing is certain, however: without that train/car hybrid thing, you won’t be going anywhere, so best keep it fueled, repaired, and such. It’d be quite terrible, were you to end up stranded in this godforsaken place, after all. Quite terrible indeed. That said,  unfortunately, we won’t be able to embark on the potentially grand adventure that is FAR just yet, as the game won’t be out until “the first half of 2017”. But you know what they say about good things and waiting, so… fingers crossed.