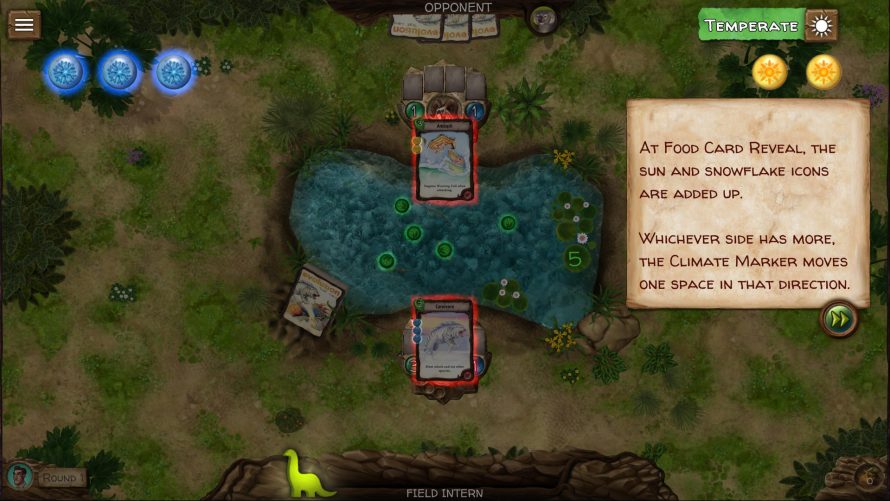 Think the chilly winters and blistering summers certain regions on this little planet called Earth get to experience these days are a challenge? You ain’t seen nothing yet. Just wait until Evolution: Climate wreaks havoc on your creatures with weather events and temperature shifts – unless you can somehow manipulate the elements in your favor. Might require a sacrifice or two, but eh, the needs of the many, right?

For those not familiar with the original, it is essentially a war of attrition and – as the name also implies – evolution, in that unless you evolve and stay on top of the food chain, you just might suddenly find yourself on the bottom instead. With up to four players duking it out, AI-controlled opponents able to put up quite a fight for those times when every slot can not be filled by humans, it’s obviously no simple affair. With just two it might have been, even three, but four? That is, quite frankly, the magic number for all but guaranteeing no one knows who they’re able to trust at any given moment as there are enough players to form alliances… and also enough to create tension, eventually breaking said alliances again. In the end, there can only be one victor, however. More details? I’d recommend my overly wordy review of Evolution: The Video Game, then.

Now, back to the point of this article: what’s new in Evolution: Climate, and exactly why did I deem it worth writing about? Well, as the title already revealed, scorching heats and freezing cold temperatures, although I suppose a bit more explaining might be in order. See, a climate meter – a slider that can be manipulated by sacrificing trait cards – sits at the core of the experience, and I highly doubt anyone is going to be surprised to find that should it reach either end (hot/cold), survival is going to be a struggle. Unless, of course, you’re ready for it, which is where the 6 new Traits come into play, enabling the creation of creatures capable of dealing with an ice age, wildfires, meteorites, and so on. In other words, the climate meter adds an undeniably complex layer of strategy on top of the pre-existing nutrition war.

Finding people to play against will be easier than ever in Evolution: Climate, thanks to the addition of cross-play between the PC and Switch version, whether it be real-time, asynchronous, or pass-and-play. Groovy.