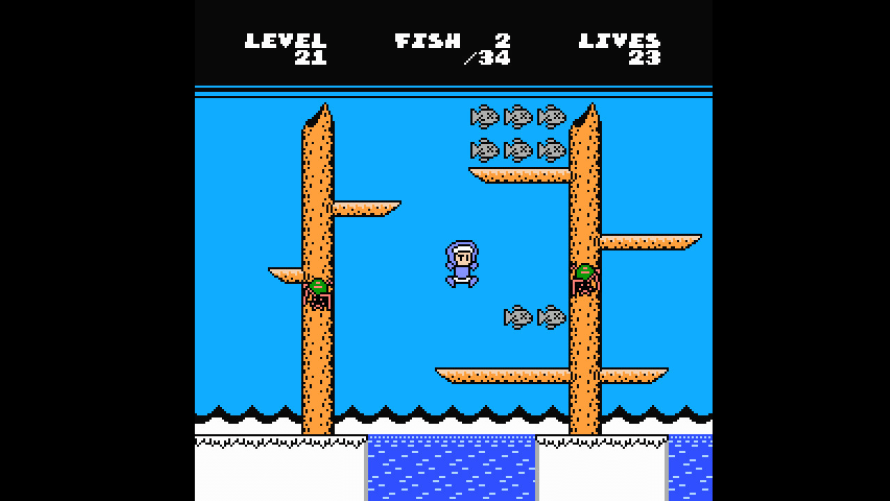 These days, it’s not exactly uncommon for a new indie game to claim it’ll bring players back to the 8-bit days. Days from many, many, many… many… many… (and now I feel old!) years ago. But just how many of them have actually seen a NES release, prior to hitting PC? Yeah. Eskimo Bob: Starring Alfonzo is definitely a rarity in that regard, fishy platforming and all. (Get it? Because… Bob collects fis-- aw.)

That said, like a lot of 2D titles from those days, Eskimo Bob: Starring Alfonzo is actually a rather serious affair, as 64 levels full of puzzling fish await (yay, more fish!), sending the duo on a quest to save their missing friend. I know, hardly the deepest plot, but does it have to be, though? Less can be more, and in this case, I suspect it is, what with that lovely bad-guy-stick-poking aesthetic and those chippy tunes. A groovy combination if I ever saw -- and heard -- one.

On top of that… how about some fun gameplay? Kinda important too, I’d say. With multiple playable characters, a wealth of levels and quite the enemy variety, chances are the developer managed to tick all boxes in that area too. Oh, and while the upcoming PC port won’t be adding a ton of bells and whistles, we are at least getting remappable controls -- which, let’s face it, is a must for a lot of people. Myself included. So, is it July 21 yet?