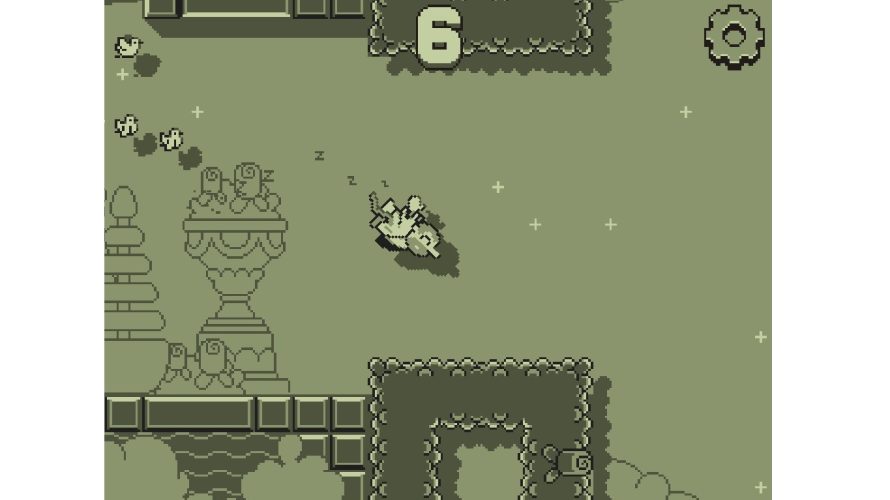 Nitrome’s definitely keeping busy with their GameBoy-centric bird creation. Originally put together for the Nitrome Jam back in June, 8bit Doves was then improved upon and ported to mobile. Still with me, or did you already run off to play Endless Doves? I’ve yet to tell ya what the game’s about though, so I’m just gonna assume you’re still reading.

Remember how in 8bit Doves, you collected birds and raced for an exit across a multitude of levels? Yeah, not quite so in this one. You’ll still be collecting birds, sure, but the goal is that ever-elusive high score, rather than… well, an end-of-level goal. Doesn’t have to be doves either, them things you pick up along the way, as in-game purchases let ya replace them with pelicans and chickens, to name but a few. Why you’d want to do that is beyond me though, because doves are awesome!

He dreams of flying… Who is he? Why does he crash? How does he fly? That doesn’t matter! What does matter is obsessive bird collecting!

Now, on the topic of controlling that fat feathery bird, not much has changed since the original incarnation of 8bit Doves. Two buttons are used to determine which direction he’ll turn mid-air, and that’s all there is to it. Pretty much on par in terms of difficulty too, I’d say, after playing it for a good bit on my phone. I have a feeling some will find it an easier experience, seeing how it actually lets ya keep flying until that inevitable crash, rather than be restricted to pre-designed levels. Chances are you’ll want to try again immediately after hitting a wall though, because… leaderboards.

Endless Doves is available for iOS (universal, iTunes) and Android (Google Play), with ads in favor of a price tag.