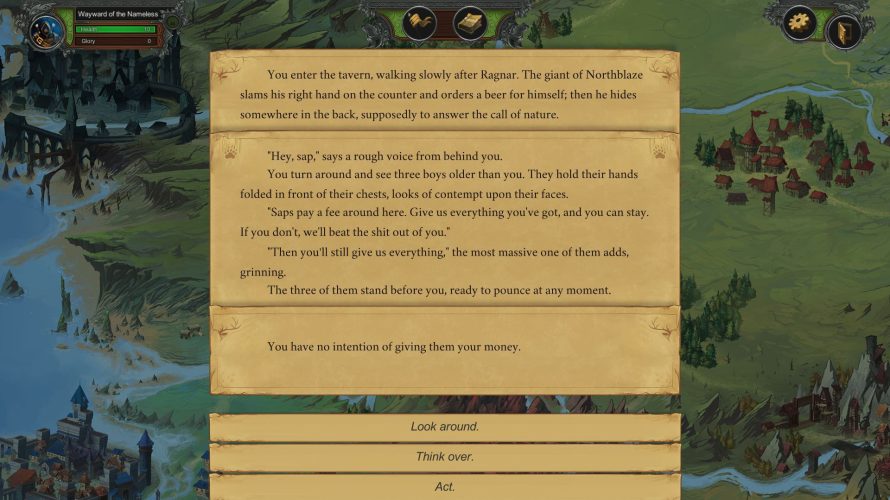 Welcome to Dust and Salt‘s Sin Lands, a locale in dire need of someone powerful enough to rid it of the Seven High Lords of Murk. Are you going to that would-be hero, or will you fall, leaving your father’s death forever unavenged? Every choice you make matters, whether it be on the battlefield or during travels, in this constantly changing classic tale of good against evil. One man – and whatever army he can build – against seemingly impossible odds. Sounds pretty groovy to me.

Best of all, you’re not forced into the role of a little goody two-shoes character, as the end result isn’t automatically a better time for the Sin Lands; there’s also the option of simply replacing aforementioned high lords as its ruler! Don’t know about you, but given the option, I’d definitely steer my campaign towards the latter. No matter the cost or sacrifices required. Why settle for vengeance when you can have so much more, after all? Go mad with power!

Build up an army and fulfill your oath to avenge your father’s death by making the Seven High Lords of Murk pay with their heads, no matter the cost to you.

That said, you will have to prove your worth in battle several times over, no matter the path chosen, as Dust and Salt is part gamebook, part tactical RPG. And far as I can tell, the emphasis on ‘tactical’ is pretty strong, each unit type playing its own unique part on the battlefield, heavies on the frontline while squishier troops remain in the back and such. Also, unless I’m mistaken, based on currently available screenshots, your army will most certainly not be a case of ‘strength in numbers’, standing five squads tall at most. Just means you’ll have to make the most of what you’ve got though, somehow keeping troop numbers high; much like in Might & Magic III, among other.

Sounds like a fun time, eh? Quite so, and while the full version – for desktop and mobile alike – won’t be out until “this fall” (whatever that means, exactly), a public alpha should be right around the corner. More or less, anyway. Gonna be great to topple those pesky oppressors and take their place as the rightful ruler of the Sin Lands!