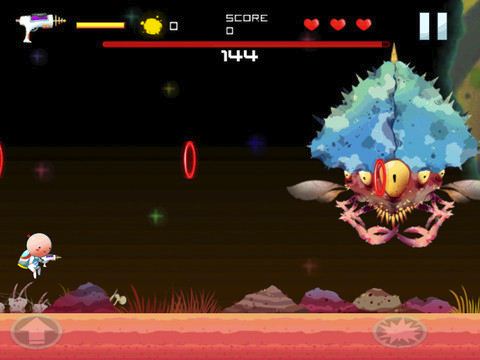 It’s been close to six months since my initial coverage of this one. Six months! While that’s not exactly a long development cycle, mobile game or not, it’s still quite a while to wait for a game to be released if you’ve been following its development actively. Thankfully, launch is upon us and accompanied by a new name, DOT Space Hero (formerly, DOT) has appeared on iTunes.

In it, you’ll be playing the role of DOT (surprise), as he goes jetpackin’ to retrieve something very dear to him: delicious stardust! While I’m not entirely sure what his obsession with that stuff is, or how anyone can use it for a snack, he seems quite determined to get it back. So it’s off to do some runnin’ (or jetpackin’) and gunnin’, in search for that precious stardust. Personally, I’d rather just find something else to eat, but DOT isn’t willing to give up so easily.

Challenge your reflexes and skills to face and defeat a bunch of aliens, sandstorms, living plants, deadly insects, guardian robots and giant enemies!

Guess you’ll have to fight for your right to… eat stardust. With “gameplay inspired by arcade classics” and “a whole galaxy to explore” topping the bulleted featured list, the developer has certainly set the bar high. Can it live up to the hype? You’re gonna have to drop a buck (during launch sale) on iTunes to find out! Based on the trailer below, it certainly looks worthwhile.