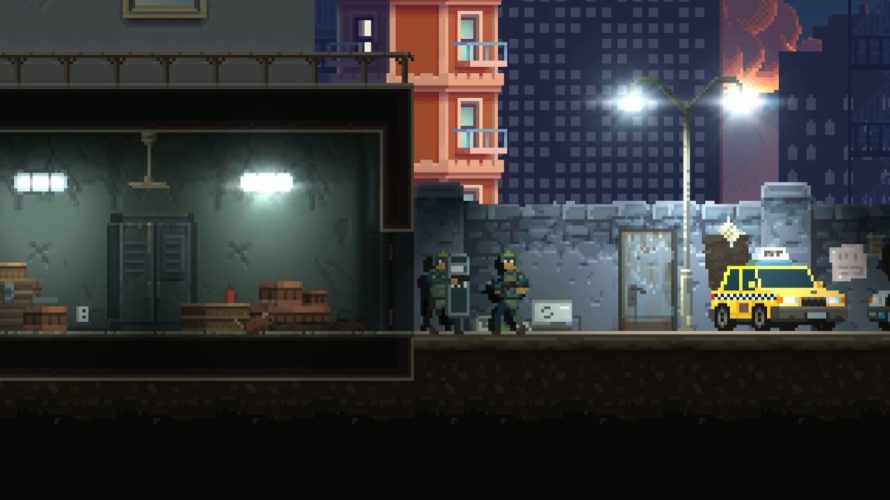 I love when developers post weird announcements. An example: the latest from Door Kickers developer Killhouse Games, Door Kickers: Action Squad is going to be a pixellated affair and in 2D no less, complete with suicidal terrorist bombers. Quite a change from the main game, which was a lovely, deeply tactical title with, well, fewer pixels and a lot of shooting. I think there was some exploding too. Doors were definitely kicked, though.

So, what do we know about Door Kickers: Action Squad? At this point, not a whole lot, unfortunately. I mean, based on the 25 or so seconds of gameplay in the reveal trailer… I’d say it looks pretty darn good. Also, gore. Because pixel violence is awesome. Or something. Oh, and holy crap was that rat ever close to biting the bullet in said trailer. The super explosive bullet. Kinda makes me wonder if that’s how the game begins – two somewhat heavily armored fellas kicking down a door, one thing leads to another, and then the game begins with you hunting down whoever organized that… event. Yeah. Probably not.

Another thing we do know for a fact is that Killhouse Games isn’t handling this one alone, as PixelShard will be co-developing Door Kickers: Action Squad. And for those wondering, no, this has not replaced Door Kickers 2. Still coming. At some point. Someday. Speaking of, both games will actually feature cooperative multiplayer, which is – hopefully – going to be pretty darn groovy. Provided it doesn’t end up being a ‘local only’ feature. Would certainly be less than ideal, in this day and age.

As for exactly when we can expect Door Kickers: Action Squad… well, “coming soon to PC” (ie. Windows) is all we have to go by at this point. For now, how about sampling the lovely trailer below?