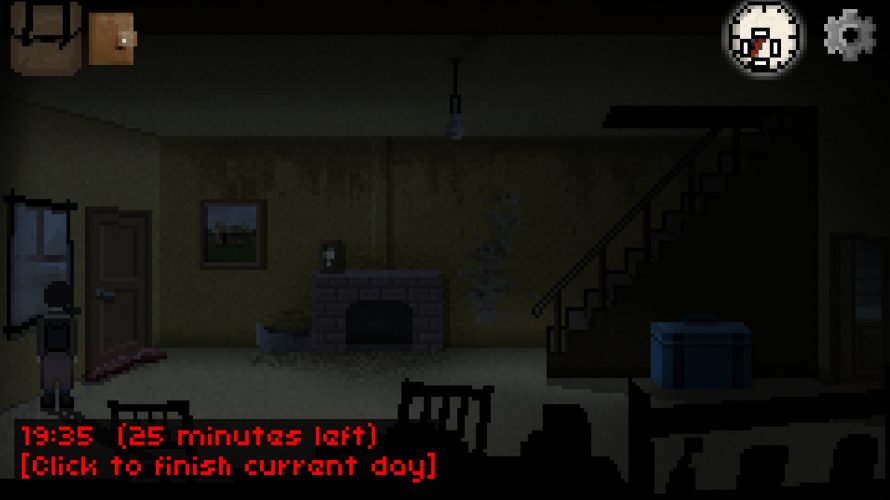 The moon. It’s a precious commodity and for many reasons too, one of which is that it directly affects life on Earth. So what would happen if someone were to, say, crack it in half? I’d rather not find out, honestly, but I’d wager it’d be along the lines of what happened in Don’t Escape: 4 Days to Survive: namely, environmental fallout. How bad? Very, and for reasons yet to be revealed, the next 92 hours are absolutely critical. Do your best to survive in this post-apocalyptic point ‘n click adventure… or die trying.

Ah, almost forgot to mention that you’ll also be taking care of your companions and that you’re on the clock – if certain things aren’t handled before night falls, chances are, so will you. And unlike most other genre entries, this one isn’t simply about solving a bunch of puzzles to reach the credits (although there will be plenty of those too, it seems). No, each playthrough will be different, as hazards encountered are randomized. One attempt might have you and your crew facing off against nasty spiders while the next – in that same chapter – have you scavenging for water to outlast a boiling heatwave instead. I’d wager this uncertainty, coupled with the lovely pixel art and moody soundtrack, makes for one helluva unsettling experience. Wait, no, make that ‘I hope’.

Fortunately, not every action advances the in-game clock, so the sense of urgency is somewhat lower than it could be, even if… well, it’s still very much present. Much like the ever-lurking doom and gloom, courtesy of scarce resources and deadly traps at every corner. Almost. Maybe just every other corner. Based on the trailer below, however, it almost seems as if no place is actually safe, every step potentially triggering a trap. While I very much doubt that’s the case, and plenty other things remain uncertain, having not played the game, I do still know this: Don’t Escape: 4 Days to Survive is a point ‘n click adventure like few – if any -other.

Dont Escape: 4 Days to Survive Trailer
Facebook Twitter LinkedIn Pinterest Tumblr WhatsApp Telegram E-mail
Previous article Get Serious About Earth's Well-Being With the 'Climate Change Jam'
Next article Adrenaline Levels Will Soar in 'Lost Wing' as Everything Blows Up in the Name of Leaderboard Climbing