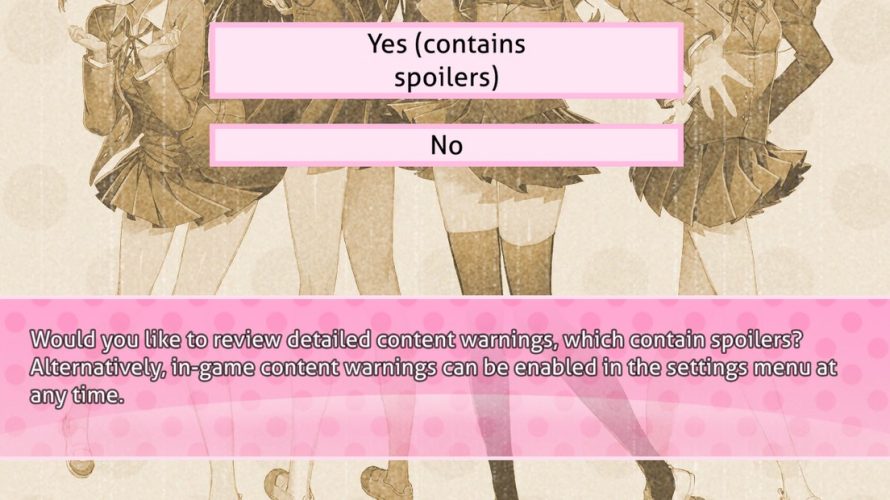 This is where I’d rant about how much I adored the original Doki Doki Literature Club!. Because I did, in spite of its content warnings, which is what this article is all about. So, here’s the thing: they weren’t handled super well in the original, requiring players to visit a website for the full list (to avoid potential spoilers). That won’t be the case for its upcoming re-release, Doki Doki Literature Club Plus!, as an in-game system will handle it, and in a much better way too, far as spoilers go.

Now, with the release of Doki Doki Literature Club Plus! right around the corner and all, I’m sure some of you are wondering why something like this wasn’t covered sooner. To which I can only say that… I do not know, and this is definitely a case of ‘better late than never’ for something as important as this. We’re all different in regards to what affects us on a level that means it’s best to simply steer clear of such content, whether it be in a video game, movie, book, or potentially worse, the real world.

In-game content warnings in particular are an accessibility feature that allows many players to enjoy games they would typically have to avoid, spoil themselves on beforehand, or put down part-way through due to subject matter they were not expecting to see.

Because of this, an external website simply doesn’t cut it for proper content warning implementation, and Team Salvato is trying its best to ensure spoilers can be avoided in Doki Doki Literature Club Plus! while also avoiding exposing players to sensitive content without, well, warning. Simply put, optional in-game content warnings that will appear shortly before moments/scenes depicting content more than a few people would rather avoid. It can be disabled from the settings menu, but be sure to give it some thought prior to doing so.

That said, keep in mind that these are additional notes regarding upcoming content, not downright removal of anything. From what I recall of the original visual novel from 2017, to say that Doki Doki Literature Club! is not for the faint of heart would be a huge understatement, and I suspect this upcoming expanded version, Doki Doki Literature Club Plus!, will be even… more. In every way. Ah, can’t wait!