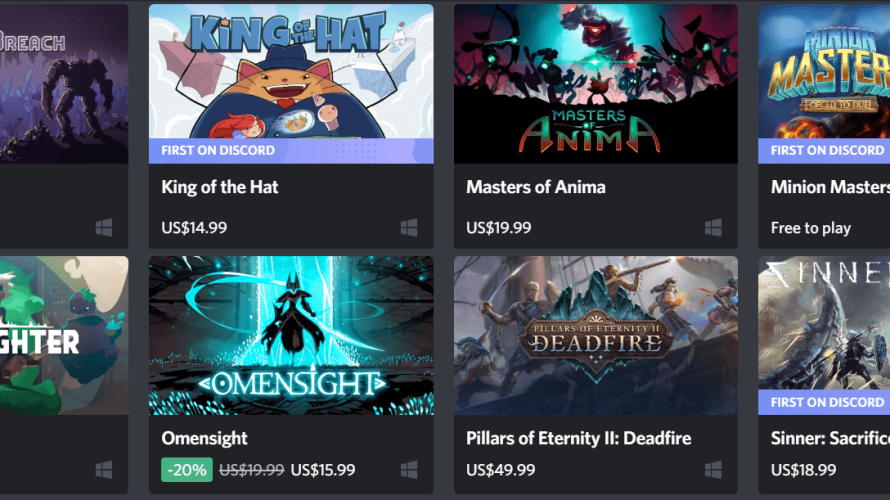 It feels like forever ago when Discord marched into the hearts of gamers everywhere, providing an incredibly solid piece of software with quality voice and text chat… and that was just the beginning. Since its early days, the client has evolved rather significantly, now featuring fun things like screen sharing and video calling; although for many, I suspect its most recent addition – which arrived earlier today – is its most important to date: the Discord Store!

Now, while Discord Store – beta or not – is not all about indie games, as you can tell from the picture above, there are quite a few (and the ones displayed there are but a small sample, really). Aside from classics like Super Meat Boy, Super Hexagon, FTL: Faster Than Light, LIMBO and VVVVVV, newer indies also signed up to be part of what will hopefully prove to be quite popular over time, the likes of Kathy Rain, Hob, and Abzu, joining the fray. Definitely worth the price tag, unless of course, you’re one of those avid gamers who already own most of them elsewhere. But eh, that’ll always be the case with a digital video game store with a mix of old and new, really.

So aside from that potential ‘problem’, what you get for your ten monthly American dollars is actually quite a lot, and like Jump, more games will be added every so often – without the subscription fee increasing. Oh, and don’t forget that non-indies are also on Discord Store, like, say, the two Darksiders titles, both System Shock games, and Metro: Last Light Redux. So many games, so little time!

On top of that, as the name implies, games will also be sold on Discord Store (you know, for keepsies, unlike those only available while the bigger Discord Nitro sub ($10 vs. $5) is active). Some of these are shown above, and as those with keen eyes may have noticed, a few are even tagged with ‘First On Discord‘. What this means is, simply put, that they are available exclusively on Discord for x number of days/weeks/months, after which they’re headed for… well, Steam, itch.io, GOG.com, you-name-it! While I’m not a huge fan of such, at least the exclusivity is temporary, and it is a nice way to stay competitive.

Not a bad launch for the Discord Store (beta, sure, but still), I’d say. But… what do you think about it?

The Discord Store Is Charging Up Right Now
Facebook Twitter LinkedIn Pinterest Tumblr WhatsApp Telegram E-mail
Previous article 'Hand of Fate 2' Expands Once More With 'The Servant and the Beast' DLC
Next article 'Snow Nor Rain Nor Living Dead' Impressions: Mailman With a Shotgun, Coming Through!