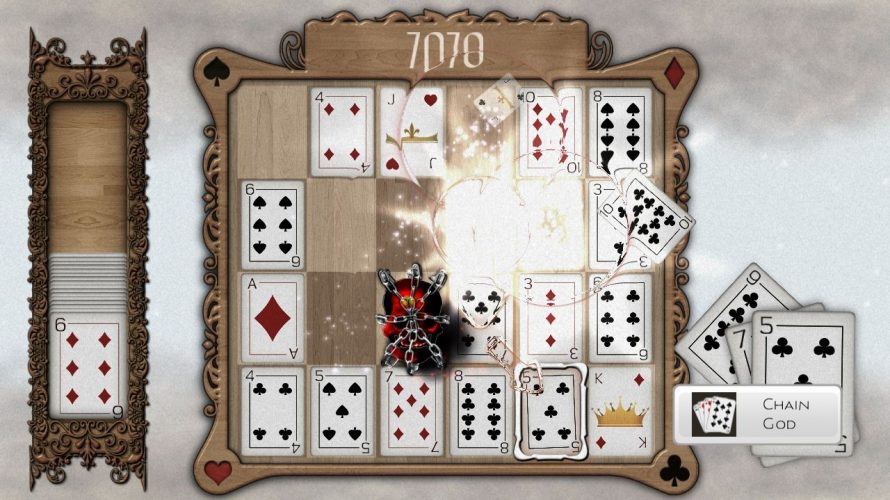 The fate of the universe hangs in the balance. The only way you can save it is by creating huge chains of cards, lighting the fuse and then making them go kaboom! It’s simple and easy to learn, but is it any good?

At first glance, Didgery doesn’t seem to set itself apart from the gazillion other solitaire games. Dig a little deeper, however, and you’ll find special cards that mix things up quite a bit. But first things first, and in order to chain cards together, there is a set of basic rules to fllow; can’t just mix and match however you see fit, for obvious reasons.

A chain can be initiated from any card, but those that follow must be of either the same suit and lesser face value or be of a different suit with the same face value. Basically, you can combine e.g. ten of clubs with ten of diamonds or go from ten of clubs to nine (or lower) of clubs, with the ace being the lowest. Oh, and they have to be adjacent. Definitely a case of easy to learn, hard to master; especially for those massive chains.

New cards are pulled from a deck shown on the left side of your screen, with only the top one being visible. In theory, this does allow for some level of strategy. But since you’ll be clearing at least two at a time, having knowledge of only a single replacement isn’t overly helpful. Doesn’t mean you can’t plan ahead though. Like in most match-3 games, removed cards cause the row(s) to drop, filling vacant space(s), thus creating new chaining opportunities.

Unfortunately, the slow pace is another thing Didgery has in common with such games. There is an alternate mode which mixes things up somewhat though and makes for a more rushed experience. But just like in zen (the default), the core gameplay still involves clicking cards away. 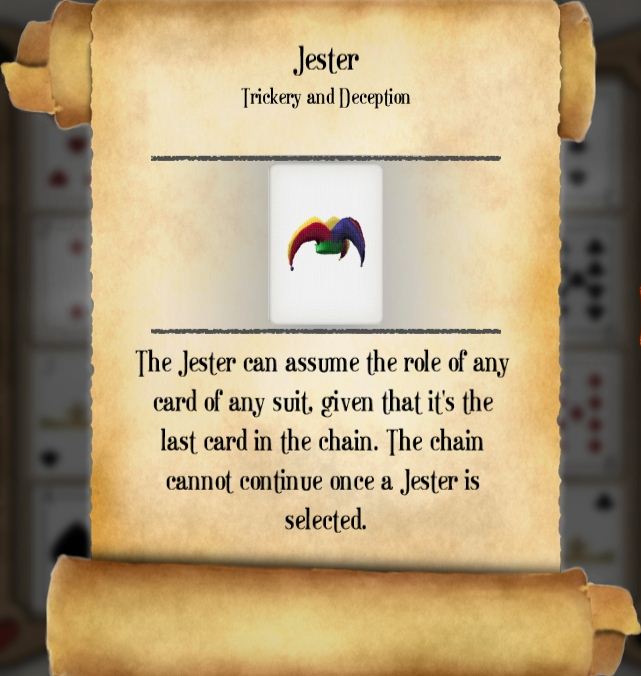 As mentioned earlier, not all cards are of the common sort. Sooner or later, those not found in a common deck will appear, and this is where things get both better and worse. See, these are ‘locked’ until you trigger a chain of six or more cards in their vicinity, and in my experience, pulling this off this can be incredibly tricky. Some might find that it makes for a more rewarding accomplishment, but I’d say it shouldn’t be so difficult in the first place.

The first you’ll come across is a Jester, which acts as the end of any chain; a wildcard, as it were. Once its chains have been removed and the card unlocked, it becomes part of the replacement pile, easing the difficulty somewhat. Other types include bridges, which allow you to two cards by using these to connect them, essentially… bridging the gap. While I haven’t quite figured out what causes these cards to appear (maybe your score?), they’re certainly an interesting addition and one that’ll make creating explosive chains somewhat easier.

Didgery is a unique merger of card and puzzle that blends fun explosive action with thoughtful strategy.

While you could just keep clicking 2-3 cards away at a time, slowly increasing your score, I’d recommend working towards setting off 5+ at a time instead. Why? Explosions, of course! Nah, but seriously, don’t settle for less – think big and plan ahead. Otherwise, you’ll never unlock those special cards, and that would be a shame as they’re pretty much the only real game changer. Well, aside from nightmare mode, of course. 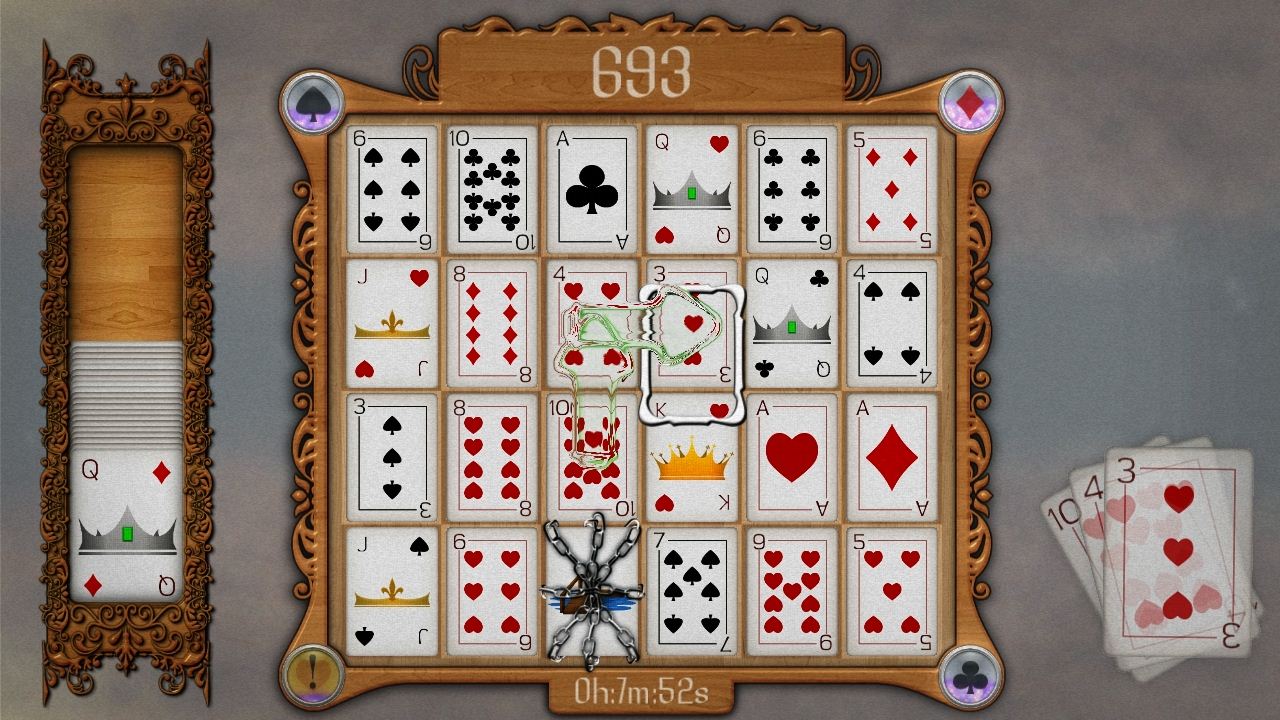 Once unlocked, I’d say this is the mode to play as it will truly put your skills will to the test. Where zen gave you all the time in the world to plan your next move, nightmare ups the ante significantly. Here, you’re literally on the clock, and unless you want it to tick faster, keep those ‘elements’ (heart, spades, diamond, clubs) from running out of juice! Each chain created adds to a specific container, depending on which suit(s) were part of it. This means you’ll have to think fast to survive because once the number reaches zero… let’s just say that no one wants to experience the outcome.

All in all, this one’s not an easy recommendation, due to its rather slow pace/progression and somewhat repetitive gameplay. In spite of that, it does contain an undeniably unique and fun twist on ye ole solitaire. As such, it’s one that fans would do well to consider. Ironically, Didgery will set you back about the same amount as a deck of cards, and from what I’ve seen, the real thing lacks both explosions and a demonic presence.