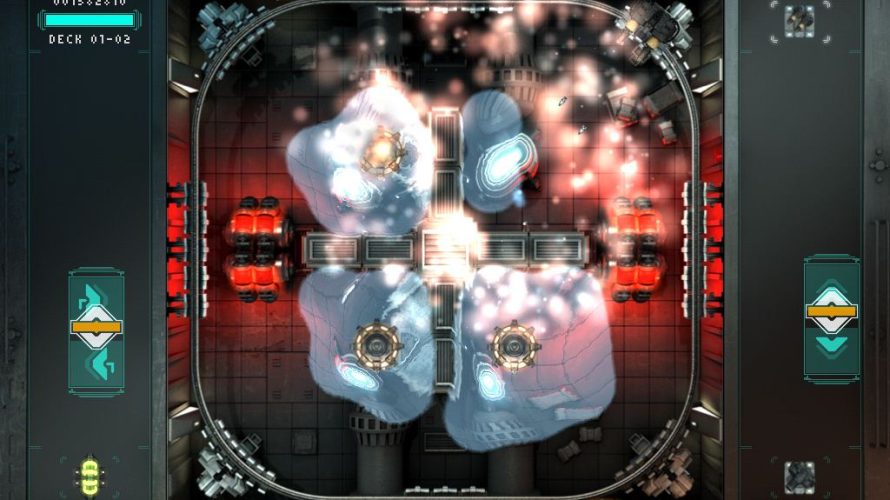 STINGOUT is currently under development by screen department and as you can probably tell from the screenshot, it looks absolutely amazing! Although without solid gameplay, it might as well have been a painting instead, so join me for a look under the hood of this arcade physics shooter.

The story revolves around Morris Brigman, the lone survivor of a crash, as he attempts to discover who (or what) blasted his ship out of the sky. It doesn’t take long for this unknown enemy to show itself, however, because immediately upon starting a new game your ship is under attack by a strange liquid alien entity! Thankfully the defenses are still operational and as such, you’re put in charge of a gun mounted on a rail system (weeee!), controlled by touch-pads on either side of the screen; one’s for movement while the other deals with weapons. It’s a good thing that the HUD is so minimalistic because with weapons ranging from cannons to rocket launchers and temporary power-ups to grab, there’s plenty to keep track of without HUD elements obscuring your view of the battlefield!

Now I really wish I had an iOS device, but hopefully, that’ll be remedied later this year, which is also when STINGOUT is set for release on iPad, iPhone and iPod Touch as a Universal App. Oh, and it’ll be completely free of any silly IAP, which I can certainly appreciate.