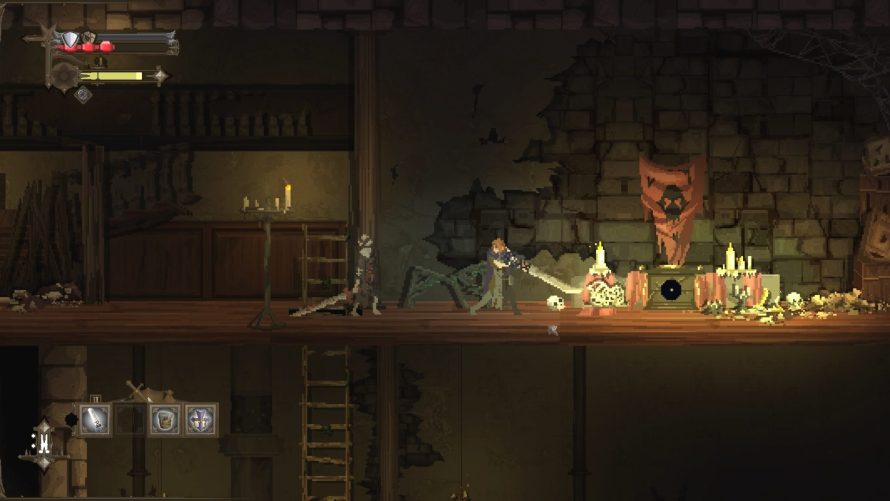 Only doom and gloom awaits in Dark Devotion, as each encounter will put your abilities to the test; knowing when to strike, dodge, block, and perhaps even run away, is essential to surviving the temple. And not just its denizens either. No, this pesky place is also determined to end your existence, and if the first trap doesn’t work… maybe the next one will? One should hope not though, as that would mean the game has won. Which would be rather… unpleasant.

If the above paragraph comes off as a tad too gloomy for your tastes, don’t worry -- the game is much darker and more sinister than I’ve made it out to be, thus far. Just kidding. Far as I can tell from the demo, at least, it’s nowhere near as unforgiving as its inspiration (Dark Souls, among other). As such, I did my best to play like I would Dark Souls, slashing everything in sight; including those which posed no apparent threat! Ah, it’s good to be evil.

Not that Dark Devotion is really about such, mind you. Or I don’t think it is, anyway. Could be wrong. What I do know is that… faith plays a sizeable role (hence the ‘devotion’ part of the title), and some sort of evil temple exists; your job is to destroy it. Why you, of all people? Well, here’s the thing: you’re the only one who went against the tide, everyone else simply falling in line, believing they did the right thing and so on. As such, a massive undertaking now lies before you, in the form of these ancient ruins. Ruins which hold many secrets -- some deadly, some unspeakably sinister, while other were… simply… otherworldly. Uncanny stuff.

Explore and contemplate the insides of a fallen Temple. Measure your value and your bravery through the deep shadows.

But alas, to fight the good fight as a female -- for once -- protagonist, Dark Devotion‘s Kickstarter (which holds many more tidbits about the game) must first succeed. With $8,872 of $23,941 pledged, there are still ways to go. Fortunately, there’s also still plenty of time, as the campaign doesn’t end until October 16, leaving it with a solid 27 days, at the time of writing. Now, if successfully funded, it seems we’re to expect a Steam release during the summer of 2018, which does seem like a long wait. Hopefully, it’ll turn out to be worth it. Fingers crossed!