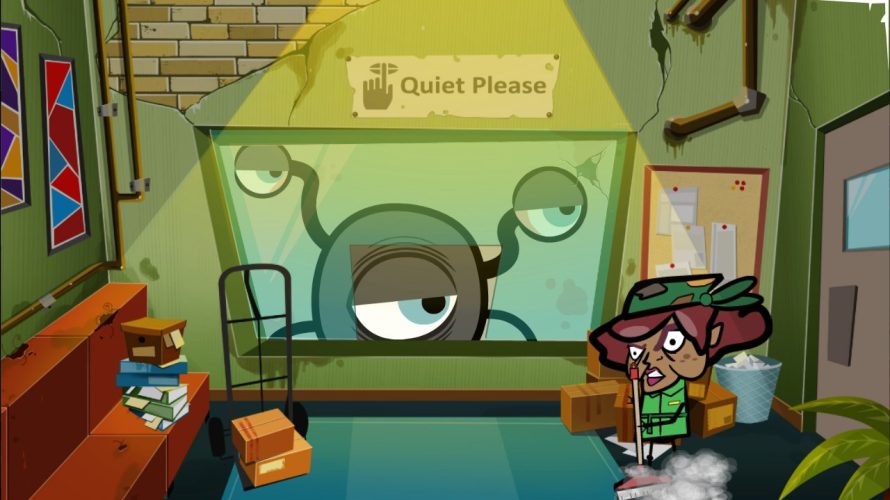 Some people would consider working nine-to-five to be hell, no doubt, but in Crisis Crunch… well, you’re literally working there. In hell. Not even kidding. How the protagonists got cheated into signing such a contract, I’ll never know, but chances are it’ll make for some rather amusing pointy and clicky adventuring, if nothing else!

Also, even death will not terminate the contract, as at that point, you’ll simply go on working for Malebolge Corp., as zombies. Gotta love when adventure games take it to the next level in terms of silliness, eh? Fortunately, you won’t be fighting the man (or Satan, I suppose) completely unarmed, since powers are totally a thing in hell. Or at least, they are for your crew.

Actually… they’re not really ‘powers’ as such. More like, enhanced versions of normal things. Drinking too much coffee to get all hyper, for example. Peculiar. Oh and how about some cartoony visuals, goofy humor along with a bunch of violent interactions, to boot? We just might have ourselves a winner here. But alas, not without defeating the big bad crowdfunding monster first.

Crisis Crunch is an “in-formal complaint” about mass media, crisis, labor situation and general stupidity of modern society, all combined with high doses of freak culture and audiovisual references.

In an unusual twist, there’s no release date – or even window – for the game yet, in spite of having a $12 pre-order tier. But there’s still plenty of time and I’m sure an update will be posted long before the campaign ends, which is in 34 days (on April 13, 2015). A grand total of $24,400 will be required for its success, of which $1,031 has been pledged at the time of writing. Plenty of time left, but also ways to go for the goal.

Keep in mind that you can support the Crisis Crunch Indiegogo campaign without spending a single cent as well, seeing how spreading word about it will also help a great deal.