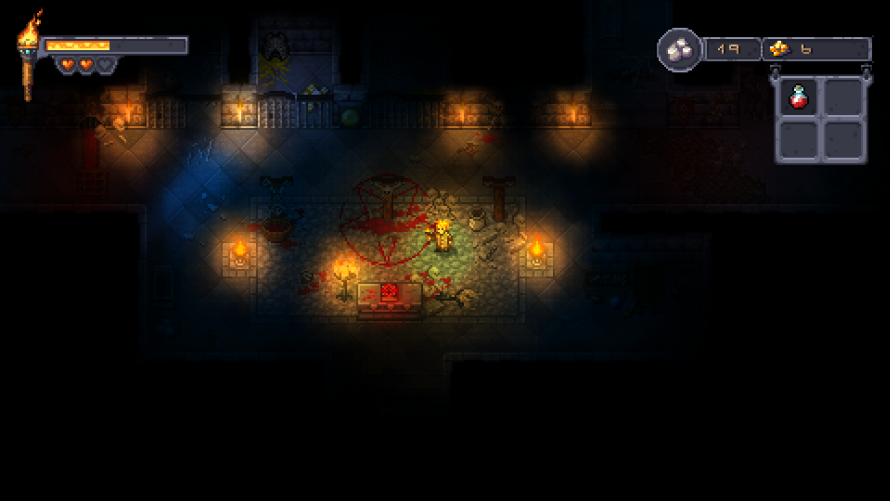 No flame burns eternally brighter than that of a mailman! That’s what I want to say, anyway, but in Courier of the Crypts, it is a finite resource that must be carefully managed. Enemy and environment alike will react to your magical torch (no, it’s not some creepy metaphor) after all, and only experimentation will teach you how to best approach each situation. Flame on, flame off!

Said torch is not your only means of defense against the dark spirits that lurk in the shadows, however, as powerful perks can be bought from a shop in these here crypts. What crypts? Oh, the ones you’ll be trying your very best to navigate, one puzzle/encounter at a time, of course! Surely you didn’t expect a game with a title like this to take place in a forest, mansion, or anywhere else NOT an ominous crypt (or several, rather), right? Right. Okay then.

The crypts, once a sacred place of mourning, is now a place of corruption, where dark rituals are practiced, unbeknownst to the world outside..

Enemies and environmental puzzles are just some of the things you’ll want to expose to the fiery power of your torch too, seeing how there are “riddles in the dark” that only the magical flame can reveal. Spooky stuff, but I’d be lying if I said it didn’t sound like a pretty good time, hand-crafted levels and all. Because, you know, not every game needs procedural generation. It’s much easier to design a strong narrative and/or puzzles without randomization after all, and here’s to hoping Emberheart Games has done just that with Courier of the Crypts, a game that dates all the way back to Ludum Dare #20 in 2011!

Courier of the Crypts is available on Steam, Humble and itch.io, carrying a $19.99 price tag.