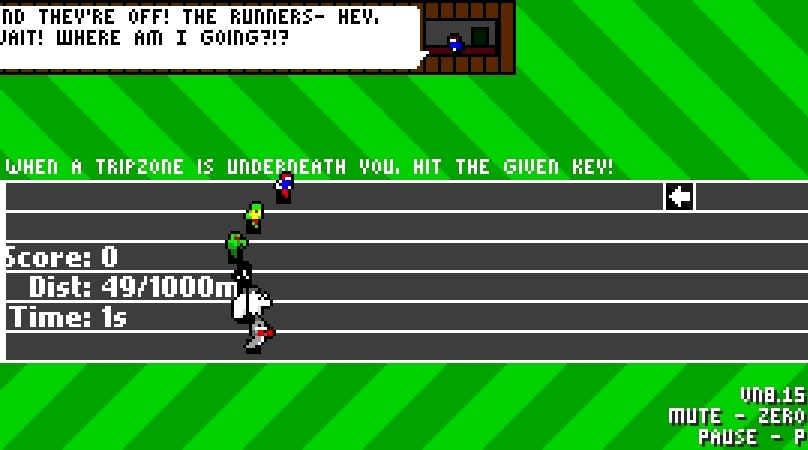 I never did understand how people could get so riled up about a footrace. It’s just people running, after all, nothing exciting about that… until Cole Slaw came along and changed everything! Why work up a sweat overtaking someone, when you can resort to violence instead? Oh, you also have to deal with spiders, golf carts and other obstacles. Ready, set, go!

Remember how great sprinting was in the original Summer Games from 1984? Yeah, me neither, but that doesn’t matter because this is nothing like that – here, it’s actually fun! Yes, I know. “Violence in video games is a serious top… blah blah” – what’s that? Couldn’t hear ya over the sound of enacting my vengeance by stabbing people who got in my way on the track! Of the cartoonish and heavily pixellated kind that is, nothing in this game deserves an 18+ rating.

Now, the first thing you’ll notice is that… you should have played a game called Feed the Children first (wait, what?), or this one won’t make a lick of sense. I decided to gamble and head straight into Cole Slaw anyway, and while I had no idea what was going on at first, fun was definitely still had as I sprinted along, leaving everyone else in the dust through a series of QTE-ish prompts. What? Oh right, the Q-word. Don’t worry: it’s just a matter of pressing a specific button as you run across it, to avoid falling on your ass. 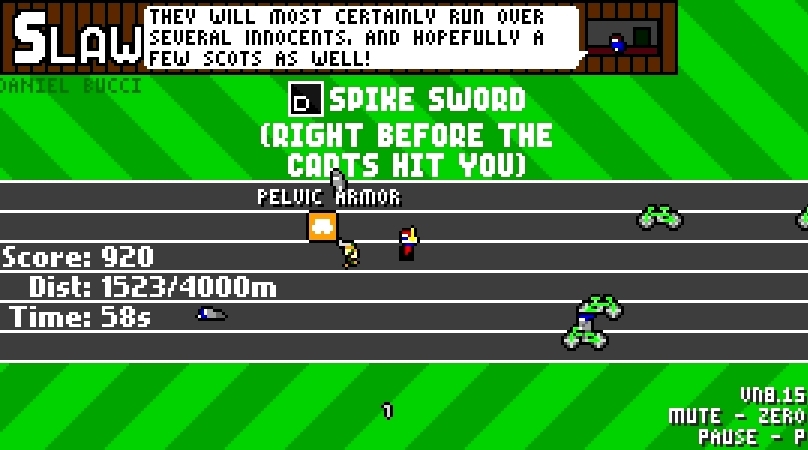 But it’s not until after the first race that the fun truly begins, with the craziness getting cranked up to eleven, as at this point, realism and common sense is thrown straight out the window. Suddenly, all kinds of people – and things – that clearly don’t belong on the track appear, so what do you do? Stab, stab, stab and then… you stab some more! Each consecutive hit increases your combo meter, which, when high enough, spawns various power-ups on the track; at one point, I was mowing people down on a horse, of all things. A horse! Doesn’t get more silly than this.

On top of that, it’s also a ton of fun, and chances are you be trying again and again until you are victorious. In fact… why don’t ya test your ability to stab the competition in Cole Slaw right now? We don’t get to do something like that too often, after all. Gotta love video games!