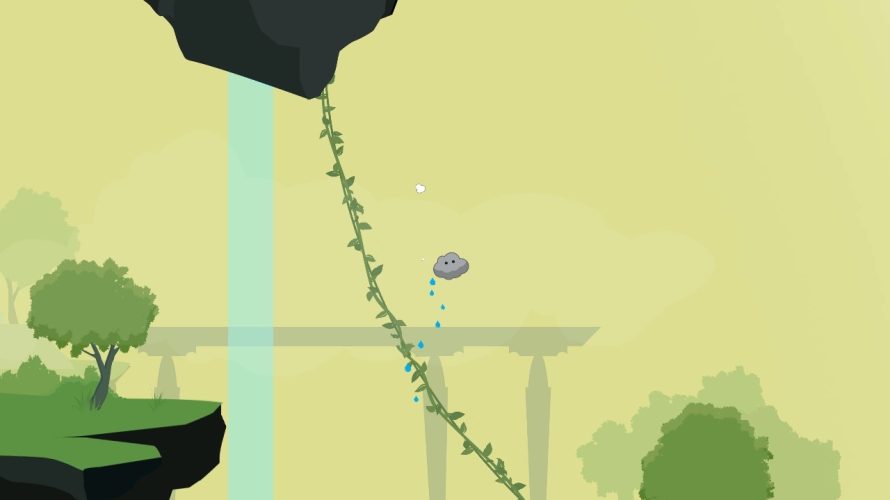 Ever wondered what it would be like, if clouds were actually sentient beings, capable of deciding when to make it rain, snow and such? Well, I’d say that’s a terrifying thought! In spite of that, taking on the role of one in Cloudfall was not only relaxing, it was also… fun.


During my first couple of minutes as a fluffy white floating creature (ie. a cloud), I was literally powerless. Sure, I could float just about anywhere, but controlling even a single element? Not possible. At least, not on my own, because as it turns out, after flying through a waterfall, I was able to unleash quite the shower! The joy was short-lived though, as I soon realized my newfound ability could only be used once. Darn.

While some may find unleashing cascades of water down from the mighty heavens randomly to be entertaining enough on its own, it does serve an actual purpose: watering a flower will make it grow, albeit temporarily (noticing a trend here), which will in turn let you acquire a different ability, to be used elsewhere. To reveal more would be spoiler-ish, although I will say this much… each of the four elements plays a part in your exploratory journey through the ruins.

The premise of the game is a no-hands-holding, relaxed exploration with an open world and a puzzling secretive environment.

At some point, sooner or later, your limited ability to manipulate the weather will be joined by more permanent feats, such as turning into a rock, which allows for quite the rapid descent (cloud smash!). Combining all these powers with when to use which, is key to solving the mystery of what’s going on, and why you’re even here in the first place.

It’s an interesting game for sure, and according to this post, the developer wants to “create a full release at some point if there is enough interest”. Well, I certainly wouldn’t say no to a more fleshed-out experience, even though there’s plenty to enjoy in its current state. We’ll see what happens, but for now, why don’t ya stop by the Indie Game Maker Contest website for some Cloudfall fun? Oh and Remember to vote!