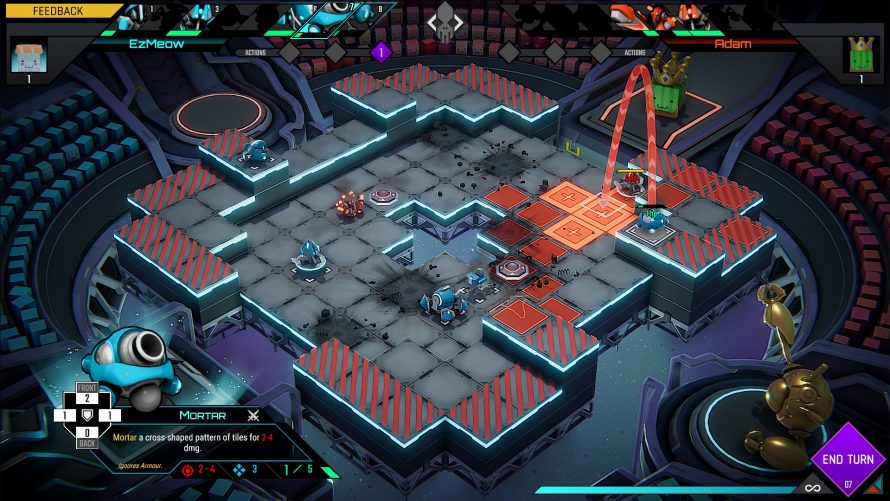 In the future, all sports will be replaced with robots duking it out, teams owned and managed by people with too much money. At least that’s how I see the world in which Clatter exists. Now don’t get me wrong: the whole thing does look like an absolute blast, top hats and all, but you know as well as I that spare parts don’t come cheap; and you better believe that scraps will start to fly, from the moment the countdown in each arena has reached zero.

That said, who cares about the world in a game like this? Players will likely be too busy building their squads (read: teams), picking and choosing the right units for a truly deadly combination of offense, defense, range, speed and so on. Grabbers! Flippers! Mortars! Explosions! Carnage! Daily challenges! All that and… even a groovy career mode, for players looking to experience the joy of “building and battling with your team across season-long leagues”.

Take your squads and strategies online and pit them against other commanders in a bid to climb your way up through bronze, silver and gold leagues. Can you make it to the top?

While I’m definitely interested in that aspect, we mustn’t forget the main attraction, which is undeniably its multiplayer component. Deathmatch and Control -- the latter of which is likely similar to Domination in classic FPS titles -- make up the available modes at the time of writing, and while that may not sound like a lot, who knows -- could still be enough for a good time!

Oh, and there’s an “ever-changing roster of maps” in Clatter, by which I hope they mean ‘new maps will be added’ and not ‘only a handful of maps from the pool will be available, swapped at certain intervals’. Because no one likes that. Except Splatoon 2 players.

Clatter is available on Steam, carrying a $9.99 price tag.