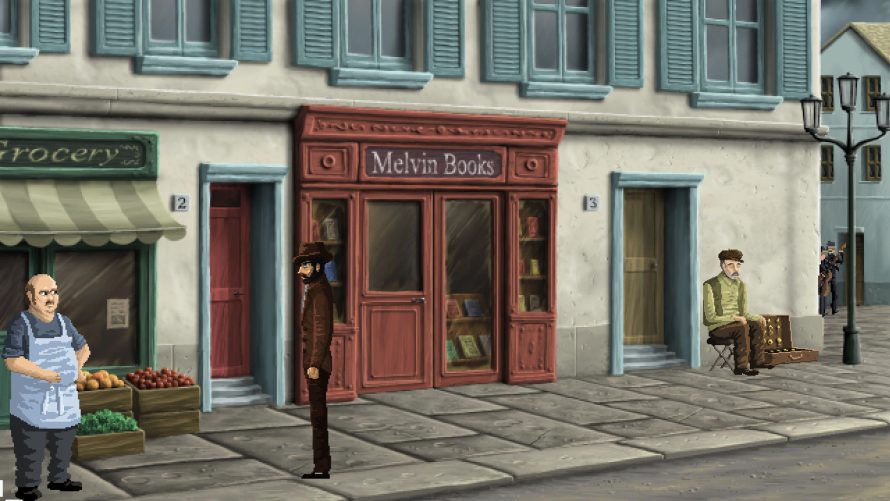 Generally speaking, dying men don’t just recover, get up, and walk away unscathed. Lone Carter is proof of that, in Chronicle of Innsmouth: Mountains of Madness, as after miraculously surviving a wound that should absolutely have been the end of him. Nothing’s free in this world, however, and now our protagonist finds himself plagued by horrifying visions and nightmares. Time to get the heck out of Innsmouth!

At least that’s what I would say if there was any chance of that spelling the end of his suffering. But alas, we are dealing with a point ‘n click adventure heavily inspired by H.P. Lovecraft (even starring the man himself, albeit slightly pixellated), one spanning several locales – like the South Pole – and very likely… lots of horrifying creations. We’ve already been introduced to the Shoggoth, an otherworldly being responsible for almost doing Lone Carter in before this story can even begin.

Speaking of which, those who have been reading my writings for a long time might remember how, back in 2017, I covered another game with ‘Innsmouth’ in the title, Chronicle of Innsmouth. Yeah, the two are connected: Chronicle of Innsmouth: Mountains of Madness takes place a decade before the events of its precursor, setting the scene for future events (…as prequels tend to do).

Drawing inspiration, places and characters from specific stories by H.P. Lovecraft such as The Shadow Over Innsmouth and The Mountains of Madness, this detective story sets you in the thrilling investigation of a horrifying mystery that will take you to iconic places like Innsmouth, Arkham and the South Pole.

Anyway, back to Lone Carter… until it’s time to play as Abdul Alhazred, author of the Necronomicon, and at one point, even H.P. Lovecraft! A disappearance? A ritual murder? Eh, nothing our little trio can’t handle in this tale that spans a handful of different eras and locales, all while still somehow being connected. I think. Maybe. True to the genre, there’ll be puzzles to test your wit as you try your best to also maintain your sanity before while climbing these Mountains of Madness.

So point, click, and magic just might happen a second time, the solution to this otherworldly mystery becoming clear as day. Probably ain’t that simple, but there’s only one way to find out.

Chronicle of Innsmouth: Mountains of Madness is available on Steam, carrying a $19.99 price tag.