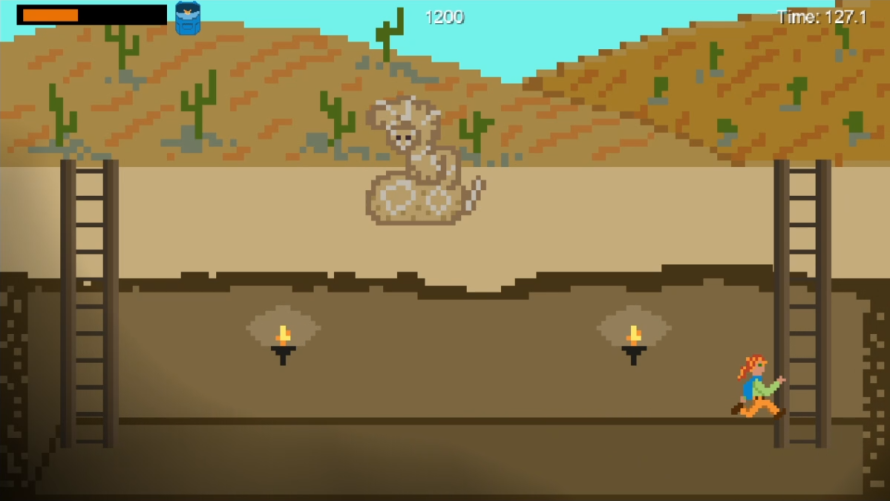 It’s not easy to mess up going to bed and getting a good night’s rest, yet somehow, Heroica managed to do just that in Chasing Tails. Although in fairness, it was by no means her own fault, as instead of peaceful sleep, she was plagued by a nightmare depicting her three orange kitties lost in a strange and dangerous world. Time for a dreamy adventure!

Now, with the realm Heroica finds herself in being a nightmarish landscape and all, it’s hardly surprising to hear traps and hazards are scattered all over the place. She can jump like the best of classic 2D platforming protagonists though, by which I mean… her gap crossing abilities reminded me ever so slightly of Pitfall – if it handled better, anyway.

Nothing complex about the controls either. She’s able to move left, right, up, down, jump, and interact with the environment at the press of a button. Doesn’t mean Chasing Tails is without issues, however, as ladder climbing can be slightly finicky, and progressing to the next screen often required leaping over an invisible block of sorts, rather than simply continuously walking. Weird but far from game-breaking.

That said, in order to locate all three kitties and bring them home safely, a fair amount of puzzle solving and obstacle course navigation awaits. Simple puzzle-solving and basic obstacle courses, that is. Which is fine. Not every game needs to be Super Meat Boy (thank goodness), and at least everything in this strange nightmare made sense. Sorta. Well, enough as to rarely confuse for long, anyway.

Beyond simply recovering the adorable little furballs, there’s also a whole bunch of optional things to do, including… well, you may want to move quickly. Dreams only last until the person wakes up, after all. So… meow?

Chasing Tails is available on itch.io, for free.