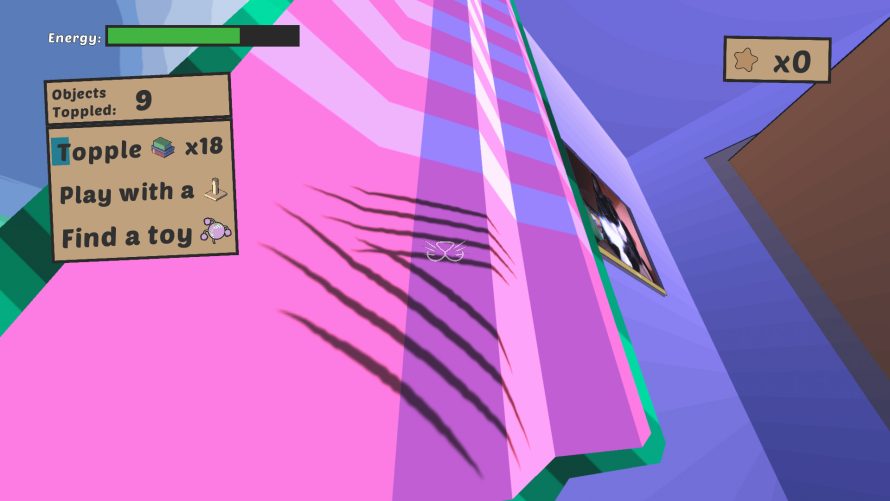 Of all the fantasies video games let players live out, that of a destructive feline is not amongst the most common. In fact, aside from the original Catlateral Damage, I struggle to come up with examples of such. This is likely why that very game is getting a ‘definitive edition’ re-release in the form of Catlateral Damage: Remeowstered. After tearing items off every last shelf, scratching the curtains and – once all was said and done – hiding underneath the bed in its demo… well, meow?

Upon starting the demo, first thing most are likely going to notice is the fact that all but one adorable little kitten is locked behind ‘not available in the demo’. The same goes for the purrks and levels, aside from the first. Even so, a groovy chunk remains within, more than enough to sample what lies ahead when the full version is released, I’d say, as I had plenty of fun jumping all over, swiping objects onto the floor and scratching everything within reach. That’ll teach the pesky owner of this cat not to put up curtains and actually, you know, store stuff on shelves. Then again, perhaps playing the part of a cat in a video game simply brings out my destructive nature? Hard to say, but I’ll gladly make an even bigger mess in an attempt to find out!

Run around the house, topple neatly organized books, shatter vases, meow at nothing, tear up curtains, nap in obscure places, and more!

Now, much like on Tinder, in Catlateral Damage: Remeowstered, you have the ability to swipe left or right, as well as a bit of poking about; for when you just wanna mow down everything in your path, direction be damned. Or some such. Anyway, it’s a simple control scheme and one that gets the job done nicely. Can’t say I was all that impressed with the ever so slightly restrictive energy system, however, although I suspect we’ll be able to tweak it once purrks become a thing – which is to say, in the full version. Oh, and in case you’re worried about the potential monotony of, well, ‘just’ making a mess… don’t worry, for there is a method to this particular madness in the form of level-specific goals, as well as a completion percentage. Purrfect.

Catlateral Damage: Remeowstered will be on Steam at some point this year with a demo available until June 22nd.