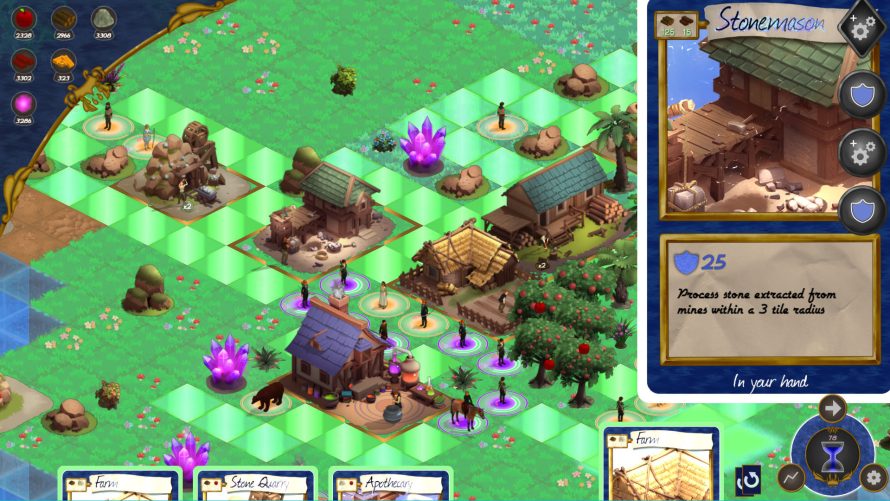 You know, I keep telling people we could do with more unique multi-genre games with a focus on, well, cards. Which is exactly what Cardlings is: a mix of card game and strategy of the (almost) turn-based variety; what better genres to blend, really? Oh, and each card has multiple uses, depending on which/how many resources you are willing to spend. So even if RNG is not entirely in your favor, the hand fate has forced you to play… might still prove valuable.

Speaking of RNG, the maps in Cardlings are procedurally generated, so you can forget about trying to gain an advantage through memorization. Same goes for thinking you’ve got an advantage by going first, for while the game is billed as a turn-based affair, it only kinda is. By which I mean that it’s not a typical “first player one goes, then player two, then player one” setup. Instead, something rather unique and interesting has been implemented: while one player takes care of combat (moving units around and attacking), the other manages his/her/its buildings (constructing and collecting resources). Then, at the end of each turn, roles are switched. Pretty intriguing if I do say so myself, and it gets even more tactical than that with a bit of a real-time twist: changed in the 1.1 update, determining how much time the opponent has to, you know, do something. Anything. At all. Just don’t forget that the roles are reversed afterward.

Cardlings is a novel tactical game, with new mechanics that result in fast paced games with no waiting time between turns.

Definitely a great way to eliminate the pesky downtime a lot of turn-based strategy titles suffers from when the opponent isn’t an AI. Which is also an option here, thankfully, complete with several difficulty settings, for those times when you simply don’t feel like taking on other humans across the internet. The objective of the game? Ah right, totally forgot about that. Well, it’s pretty simple, oddly enough: destroy the enemy castle by any means necessary, or… fully upgrade your own by gathering a crazy amount of resources. Play offensively or defensively -- both paths can lead to victory, even if the deck is stacked against you. I think. Actually, you might be you-know-what, if the goddess of randomness has it in for you. But give it a go anyway, for who knows what can happen in a game of Cardlings?

Cardlings is available on Steam, carrying a $4.99 price tag.