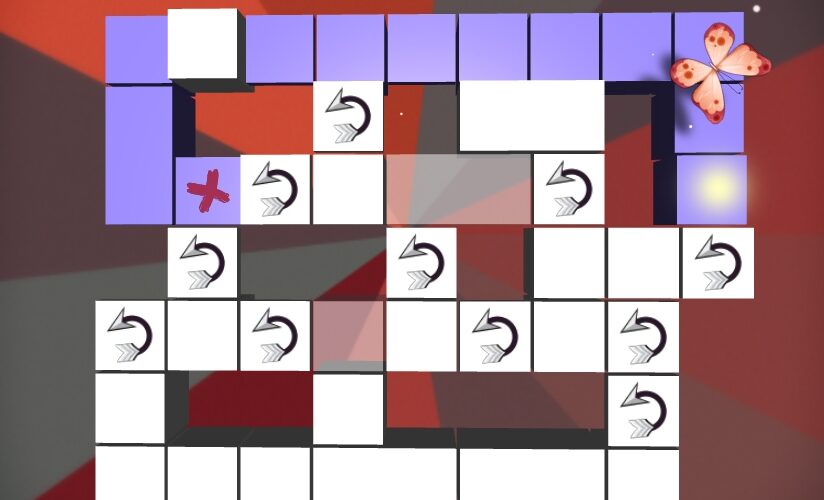 So… “dédale” means “maze”, but that doesn’t really describe the game and it’s very unlikely that anyone’ll be interested from just that bit, so what’s it all about?

At its core, Dédale is a puzzle game of the kind where you have to “paint” all the titles in a level in order to progress to the next, but as the game progresses certain twists are thrown at the player in an attempt to keep things somewhat fresh as the tile-painting may get a bit repetitive after a while.

The choice of main character strikes me a bit odd, but since there is no actual plot to be found here – this is a puzzle game after all – it matters little that you’re controlling a butterfly from start to finish. Another feature Dédale packs battle to aid it against the repetition that plagues many puzzle games, is a mode where each level is procedurally generated (aka. “randomly generated”) and let’s face it: What could possibly be better for the replay value than a mode where it’s all new and fresh, every single time?

And for those who like to get creative and make their own stuff within the games they play, the developer has made the following promise (source):

If I get at least 200 purchases for the desktop version of Dédale, I am going to roll out an update that will allow anyone and everyone to create and share their own puzzles. This update will be included on all the platforms, and levels will be cross-compatible. Best of them will be featured on the website for anyone to see.

Dédale is available on both Desura (PC/Mac) and iTunes (iPhone/iPod Touch/iPad). What? Want to try-before-you-buy? A demo’s available from the Desura page and the official website and here’s a link to the developer’s Twitter.