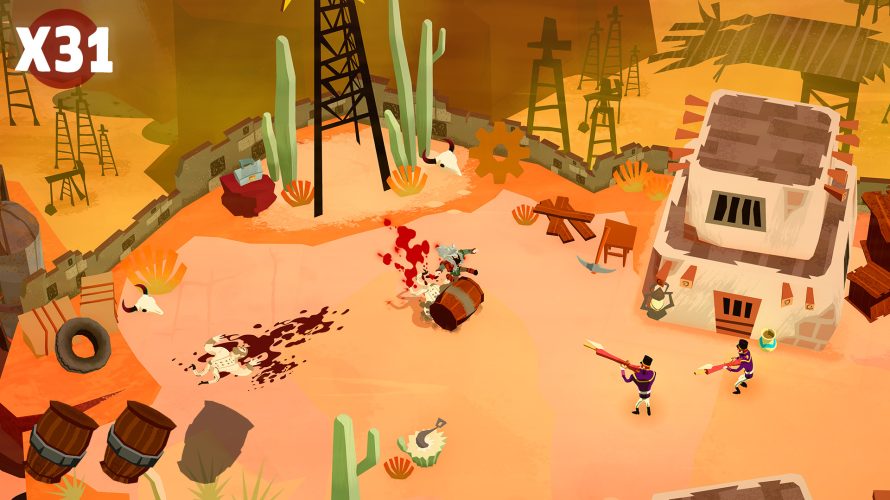 One hit. That’s all it takes. Either you die or they do. If you’re the one suddenly splattered across the ground, well, retry, and maybe… try not to die next time? It may sound a tad harsh, but that’s Bloodroots. A world in which everything can be used as a weapon – including carrots. Oh, and it’s a revenge tale that has you playing the part of a character known simply as Mr. Wolf. Welcome to the Weird West.

So, here’s the thing: in typical video game villain fashion, someone forgot to check if the protagonist had actually been killed before walking away, and let’s face it, no one likes being left for dead. With no idea why Mr. Wolf was betrayed, borderline murdered even, or by who, the only logical course of action is, as already mentioned… revenge!

Betrayed and left for dead, Mr. Wolf is hell-bent on finding his killer and enacting revenge – alone, and vastly outnumbered.

Now I could be wrong here, although it seems unlikely, as the trailer below certainly more than a little indicates that no one is on your side in this. Everyone’s invested in putting you out of their misery; even underpaid small-time hired guns. That does make it easier to go on a rampage though, not having to take friendly fire into account at all. Unleash that boiling murderous intent and set the world ablaze, never stopping to care who gets hurt as you inch closer to – wait, did I mention how your motivation is entirely built around the thought of sweet revenge? Right. Okay. Good.

Because I’d wager you’ll be doing a lot of killing of your own by the time the credits roll, likely even more dying and retrying. Which is fine. Comes with the overall fast pace of the experience. Also, in case you somehow didn’t notice or simply ignored the trailer: blood will be spilled. A lot of blood. Inhuman amounts, actually. But eh, video game, ya know? Heck, there are even leaderboards for those looking to really get competitive while, well, rampaging.

Bloodroots is available on Switch, PlayStation 4, Epic Game Store. Will be on Steam come March 12, 2021.