Wryn is back and even more bad-ass in this sequel to Bleed, now capable of pulling a return-to-sender with bullets (among other things), expanding her already groovy move set in Bleed 2. You’ll need every last bit of it too, in order to stand a chance against the villainous invaders.

Oh, and like in the original, bringing a friend along for the ride is possible. I mean, twice the damage output, half the difficulty, right? Yeah, about that. Prior to reviewing Bleed, I didn’t get a chance to experience it with a second player. That was part of my experience prior to writing this review of Bleed 2, however. Just… don’t get your hopes up. Alright, introductions time! Except first: I reviewed this game in 2022, five years after launch, and did not play version 1.0 (in case anyone’s confused regarding potential version differences).

Like many of us, Wryn would like nothing more than to spend all day playing video games, meaning she’s naturally put in a rather foul mood when her gaming is interrupted by an invading force; she is, after all, the world’s greatest hero, meaning it’s pretty much her job to deal with such shenanigans. Either alone or with a friend. By which I mean a color swapped version of Wryn in local co-op, accessed by pressing ‘X’ on the gamepad, and unless you’re both really good at fast-paced platformers, I’d strongly recommend setting the difficulty to easy. I know, I know: as I said earlier, twice the damage output, etc. Except that’s not how it works. Well, not exactly, anyway. 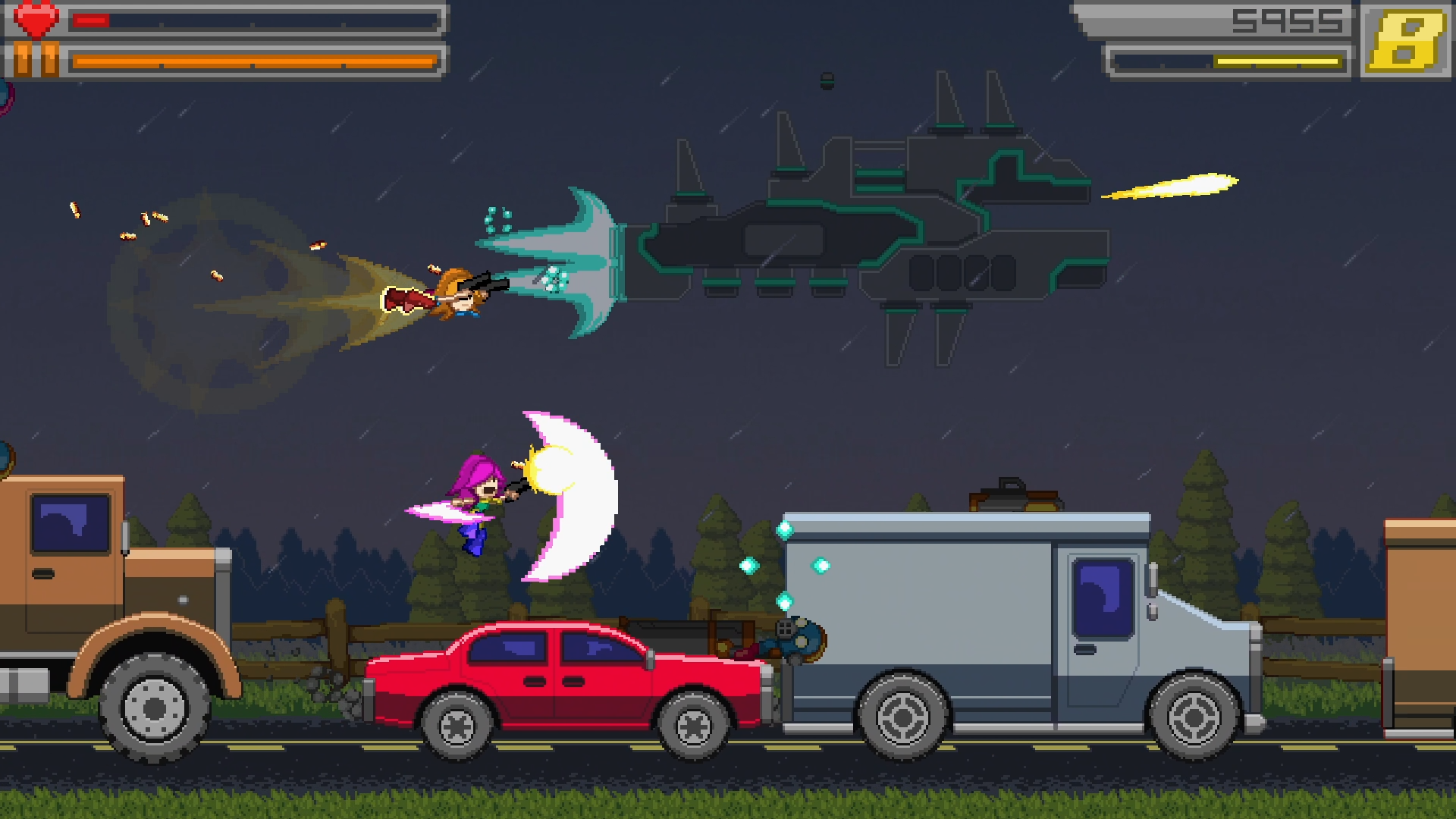 Getting ahead of myself? Oh, right. Let’s see… now, while most 2D run ‘n run platformers have their protagonist(s) moving, jumping, and shooting, this one has a few genuinely awesome tricks up its sleeve. Bullets coming in too fast? Hold down a button to temporarily slow time! Bouncing around casually not cutting it? Dash through the air with utmost speed and precision! Are bullets too big to even remotely try dodging? Slash, slash, and slash some more until you smack it right back in the face of your enemy! Yup, Wryn’s quite the agile young lady, and you better believe it helps elevate the overall experience. By a huge margin.

While the vast majority of (good) genre entries have some level of mid-air control after the character’s feet leave the ground, there’s really no comparing that to the ability to dash in whichever direction, mid-air, and multiple times at that. Aiming is equally accurate and easy to get the hang of, handled entirely by the right stick – almost as if Bleed 2 was a 2D twin-stick shooter. At least you won’t have to worry about ammunition, and not just for the starting weapon either, as Wryn somehow carries an infinite supply wherever she goes. Reloading? Yeah, also not a thing. Explanation? Like her ability to slow time: just go with it.

If all that sounds like a lot to grasp, don’t worry: everything is explained on a need-to-know basis. As in, the first time you encounter the need to pull off a specific move, the game tells you how. Not by pausing though. No time for that. There are evildoers to gun down and let me tell ya, next-to-nothing slows down the pace over the hour or so it takes to reach the credits. Except maybe dying. Which might happen more frequently during some fights than others. Depends entirely on your level of skill and ability to read patterns, and real quick too for this lot is not messing around.

Early on, you get to take it somewhat easy, dashing through one building after another, nothing but relatively weak enemies standing in your way. But then you get to the first boss fight. Actually, scratch that. The second. Let’s go with the second big guy you meet, as this one poses far more of a threat, putting your ability to dodge, dash, reflect – all that good stuff – to the test. It’s obviously far from the toughest fight in the entire game, although a fun challenge nonetheless. The only way from there is up, or at least that’s what I would say, were it not for the fact that certain encounters seemed far more difficult than the rest. Almost like the bad guys hadn’t realized that it might make more sense to let the hero grab a few victories to start with… and then pull the rug out from underneath her, absolutely wreaking havoc with an ultra-powerful boss encounter. Speaking of, bosses don’t appear to have been properly balanced, if at all, for co-operative play. We were doing relatively okay until a certain fight, kicking you-know-what, taking names, and so on. Well, aside from the fact that player 2 would always leave the screen if I went too far ahead. Didn’t even help if he went first, as the screen would not scroll from anyone but the first player’s movements. Strange design, to say the least, but as mentioned, it was a certain boss fight that ran our patience thin, ending that playthrough right then and there. It wasn’t until we called it quits and I played the level from scratch by my lonesome that we all but confirmed a nagging suspicion: the overall difficulty is much higher with two players, the pace much faster, which is not exactly great if one of the two doesn’t have a ton of experience with similar games, as it leaves them at a bit of a disadvantage. Ah yes, and how about a shared health pool? On paper, it might not sound so bad. In-game? Pretty rough. If not for the additional challenge, plowing through Bleed 2 with a friend might prove a lot more enjoyable than our attempt.

I wouldn’t go so far as to say it wasn’t fun, in the most chaotic sense, because it most certainly was, reflecting everything in our respective color with what’s essentially a lightsaber, gunning down absolute hordes of robots and bosses that ranged from pretty cool to super weird. That part did not change from single player to co-op, even if the game over screen did make a much more frequent appearance, shared health pool and all. Of course, it did help that enemies were as varied as the levels, from gun-toting soldiers(?) to ninja cats(?) and everything in-between. All had one lovely thing in common though: death came swiftly upon making contact with one or more bullets.

Can’t say the same about the boss fights, although at the same time, that wouldn’t really make sense. Instead, these are more of a puzzling affair, requiring certain event chains before their weak spot is revealed. Classic 2D run ‘n gun stuff… and I love it. Especially with how over-the-top most of them were, something one might stumble upon in a superhero comic book. Colorful, zany, fun to fight, and likely to bring a world of hurt upon you at every opportunity. Just don’t forget that you’re able to pause the game at any time for some weapon and air-dodge switching. None of which is going to be super useful until after beating the game on normal or higher once, unless you, for whatever reason, feel like limiting yourself to the lightsaber. To each their own? Besides additional weapons and new air-dodge moves, depending on which difficulty you beat the game on, a clear unlocks something else that I personally found more interesting: mutators! These toggles, ranging from infinite health/energy to zero-gravity environments, disables saving and achievements while active – for obvious reasons – but can be a ton of fun to mess around with, perhaps even practice speedrunning as there is an optional in-game timer elsewhere in the menu. Accessibility options are another great part of Bleed 2. Camera push, screen shake/flash, and other visual aspects can be turned off here, which is honestly something I feel every game should allow players to do. Particularly screen shake/flash.

Last, but by no means least, how about those other modes, for when you need a break from, well, ‘story’? ‘Arcade’ limits you to one life (but enables leaderboards), ‘endless’ brings a series of randomized levels, while ‘challenge’ features absolute madness in the form of up to three bosses at once. Good stuff, no doubt, much like its main mode. Maneuvering Wryn through each area at blazing speeds is just such a joy, guns blazing, lightsaber flailing wildly about… death to every last invader!

So, to summarize: Bleed 2 is a great game. Better than Bleed? Hard to say, although at least as good, for sure. Yeah, it’s kinda short, but in that regard, I feel it’s fair to compare it to an arcade game – an experience you won’t be done with after a single playthrough. In other words, there’s plenty bang-for-buck to be found within, even if its story mode only makes up a decently sized portion. Did I mention how it’s an absolute blast? Because I feel that’s rather important. Its age (five years, at the time of writing) is definitely not showing in the slightest.