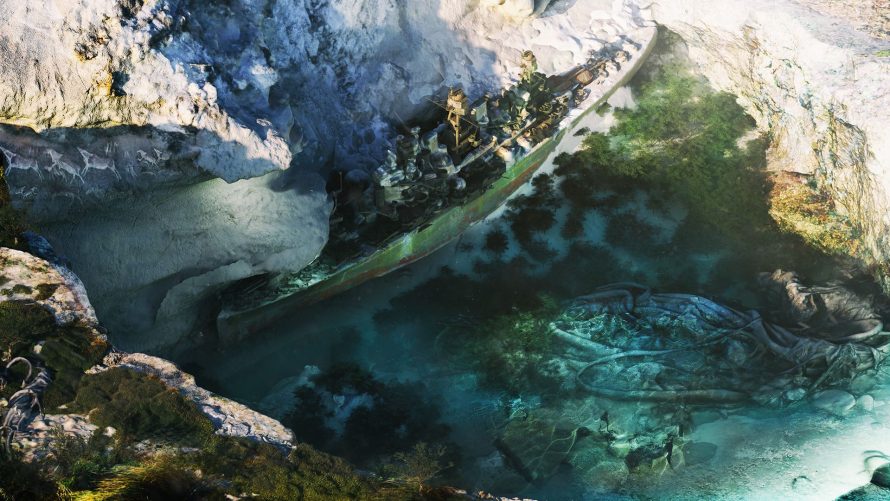 It all began with the arrival of an alien object which has since come to be known as the Penrose. This monolith arrived, seemingly from out of nowhere, and as they’re known to do, scientists immediately jumped at the opportunity to explore it, forever changing the course of mankind. That is until an odd line of text was discovered inside. Text written by Mark Leslie, one of BEAUTIFUL DESOLATION‘s two protagonists. But how? And just what does “I WILL FIX THIS” mean? And again, how?! Cue dramatic music…

Still reading? Great, because far as I can tell, this is one post-apocalyptic adventure that should not be missed, successful Kickstarter pending. I mean, really, when was the last time we got to such a setting, in Africa of all places? Usually, we’re trekking through either the U.S. or Russia, so… nice change of scenery if nothing else. As nice as a ‘world gone wrong’ can be, at least. I’m sure Mark and Don, accompanied by POOCH the drone, would rather be somewhere else -- somewhere significantly more idyllic. But that’s not the hand they -- or the player -- have been dealt by THE BROTHERHOOD, whom you may know from 2015’s STASIS.

Every screen in BEAUTIFUL DESOLATION has a real piece of Africa in it -- most often due to changing winds and ocean tides it is something that will only ever exist in our game.

Now, while the title, BEAUTIFUL DESOLATION, may seem like quite the oxymoron, the game world is actually quite a sight. Whether we’ll have time to take in the scenery while actually playing, however, is another matter altogether. I suspect there’ll be at least a few instances of run-or-die, amidst the genre typical puzzle-solving and exploration, after all, environmental -- and living, breathing -- hazards lurking around every corner. And robots! Gotta have robots. Always.

But before we get to point at stuff and click to make magic happen, there’s a Kickstarter campaign in need of money; or support, through ye ole word of mouth. Either way, they need your help to slay a crowdfunding beast: $42,007 of $120,000 has been pledged at the time of writing, with 24 days to go. Plenty of time, but also a rather large amount remaining. Oh, and since they managed to rally enough backing for an almost same sized STASIS campaign back in 2013, hopefully… they’ll be able to pull it off again with BEAUTIFUL DESOLATION.

Could definitely do with another post-apocalyptic video game that isn’t either an RPG, a shooter, or a hybrid, that’s for sure. So let’s get it kickstarted!