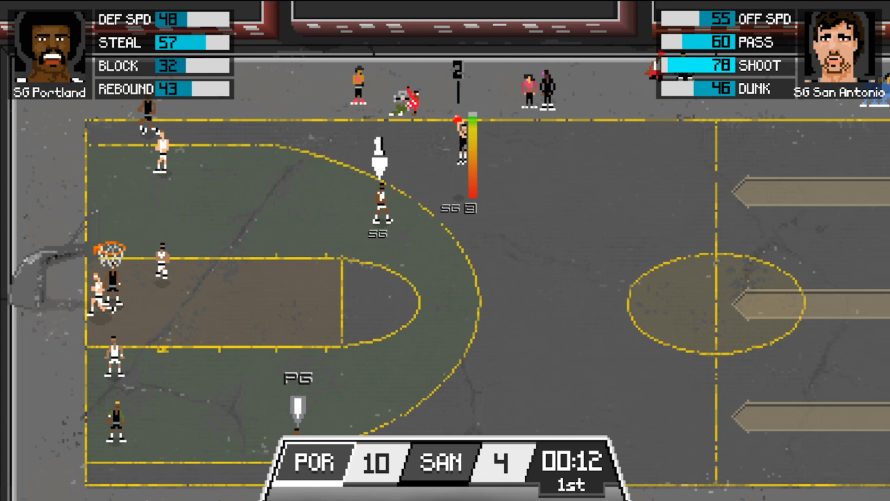 It’s time to work up a sweat on the court as you attempt to put balls through almost too small hoops in 5v5 competitions, and all with just three buttons to manage. Overly complex controls? Maneuvers so advanced that most would abandon the sport altogether before even attempting them? Heck no. Not in Basketball Classics! This is old-school balling at its finest, and to some extent, also most basic.

Although as certain sports titles from yesteryear have proven, trimming the fat for a more streamlined experience doesn’t automatically make the whole thing boring. Just look at Sensible Soccer, which actually has a few things in common with Basketball Classics: a pixellated, basic art style, easy-to-learn controls, and a genuine retro feel; even back when it came out! Whether the similarities are intentional I do not know. Not that it matters, really, because based on the trailer below, this one does more than enough to provide players with plenty motivation to return to the court, time and time again.

3 button gameplay is easy to pick up, but it is the dynamic play-calling that elevates this title beyond just long bombs and acrobatics.

That said, those looking for a more realistic take on the sport may want to opt for something else. This one does play a lot more like the NBA Jam games of yesteryear than those fancy current NBA 2K titles after all, but… that’s part of its charm: over-the-top dunks and blocks – both of which seemingly trigger some sort of 1v1 mini-game – and then there’s the turbo, for when ya gotta go fast (or, as the trailer puts it, a ‘chase-down’). Undeniably good stuff, this.

With such zany gameplay, one might expect the roster to be somewhat, well, lacking. In which case, one would be very wrong as more than 175 teams and over 1000 players (each with individualized attributes) are portrayed across “decades of rosters” here. Very impressive, and it doesn’t end there either as there are “Legends” to unlock by playing through the game’s story mode. Oh, and local multiplayer is, fortunately, also a thing. Which, according to the Steam page, is “scream-inducing”. So… arcadey, over-the-top, unrealistic (just to emphasize, in case ‘arcadey’ wasn’t enough), and scream-inducing – exactly how I like my basketball games!

Basketball Classics is available on Steam, carrying a $9.99 price tag.