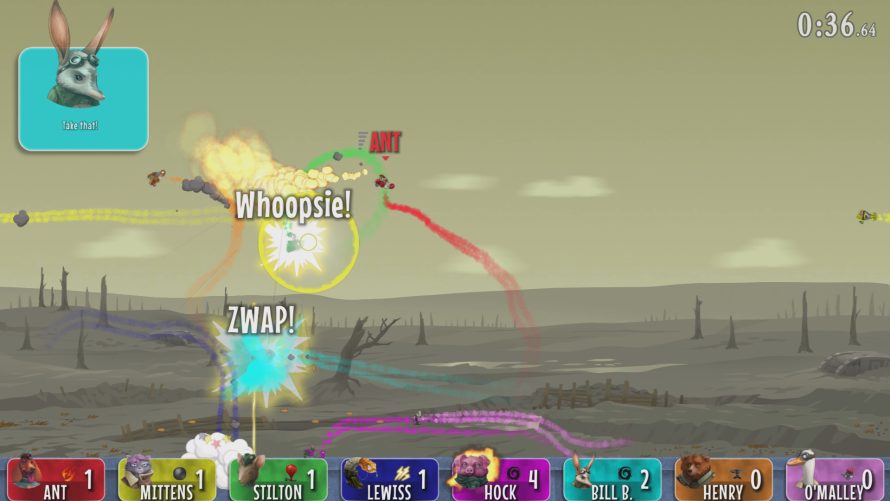 “Smash your friends before they smash you”, they said. Sure, why not? After all, what did I have to lose? Aside from my dignity, were I to be on the losing side of a battle fought using… well… bug zappers, black holes, stinky fish, anvils and so many other unconventional weapons. But such is Baron: Fur Is Gonna Fly, and I wouldn’t have it any other way.

Oh right, completely forgot to mention that in the world of Baron: Fur Is Gonna Fly, war is waged… by animals. Animals who are somehow capable of flying biplanes. Yeah, I don’t know what kind of dark sorcery is at play here, and quite frankly, I’m afraid to find out. I mean, imagine for a second if pigs, bears, cats, dogs and other animals suddenly took to the sky in our world, flinging anvil after anvil at each other. Exactly. Let’s just leave it there and move onto the game instead. Or some such.

Right. So, whether you’re up against (or with) up to seven(!) other players or AI-controlled bots in what is bound to be a truly chaotic battle for aerial supremacy… matters little. To the crowd of reporters watching each and every confrontation so that they’re able to post about it in the so-called ‘dynamic newspapers’, that is. Of course, it matters quite a bit to you, the player -- or it should, at least. Just saying. Ah, and on the topic of flying solo (or with bots): how about a round of Sheep Attack? I have no idea what it entails, aside from potentially blowing up lots and lots of sheep in your trusty biplane. Which is enough for me to want to try it. Right now. Onward, to victory!

Baron: Fur Is Gonna Fly is available on Steam, Switch, and Xbox One, carrying a $19.99 price tag.