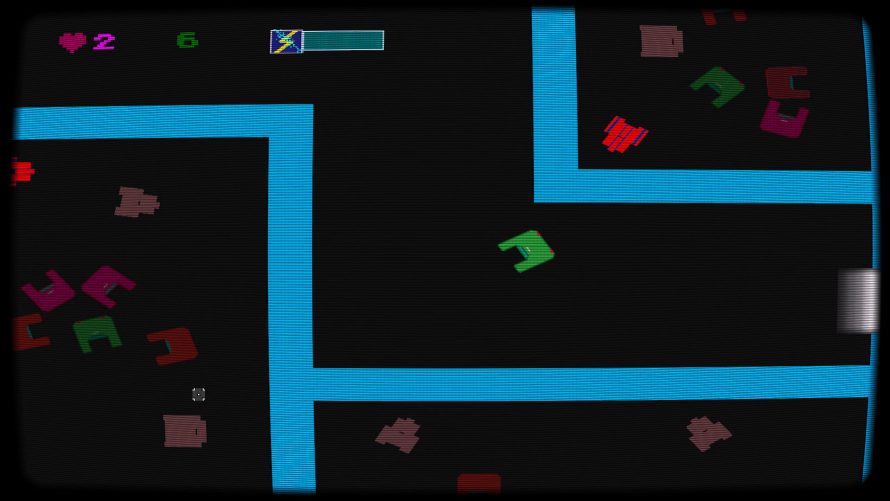 Most games I’ve played involving a mothership requires you to trek through a decent chunk before unleashing them upon that big thing. But in an odd twist, that’s where Backfire begins and ends. With a glorious victory, should you manage to save humanity, or in a massive explosion after you take one too many hits, whether from enemies or… your own bullets.

I know, “how could my own bullets possibly harm me?!”, right? Well, I’d like to say ‘video game’, and leave it at that, but then I might as well not write about Backfire at all. So here’s the thing: I don’t know what the walls are made of aboard this so-called mothership, but bullets will ricochet off every single wall in here. Doesn’t matter if you play as Spike or Sotira, taking on all those aliens and robots – same rules apply, so only shoot when you absolutely have to, or you might soon find yourself in, well, bullet hell. Oh, and enemy bullets are also super bouncy. Neat!

There are a few advantages that only you, and none of your foes, possess, however, including temporary bullet-time and upgrades for your ship, paid for with currency from fallen foes. Upgrades you’ll likely need to survive the more than thirty-five levels that await (big mothership, eh?), and several boss battles on top of that. Yeah. You’re definitely going to need those upgrades, maybe even a bit of luck, depending on your skill level and ability not to panic against overwhelming odds. Best of luck.

Backfire - Launch Trailer
Facebook Twitter LinkedIn Pinterest Tumblr WhatsApp Telegram E-mail
Previous article Only Through the Splatting of Paint Shall 'The Unfinished Swan' be Complete
Next article Keep the Lights on, Take Care of 'a pet shop after dark' in This Visual Novel