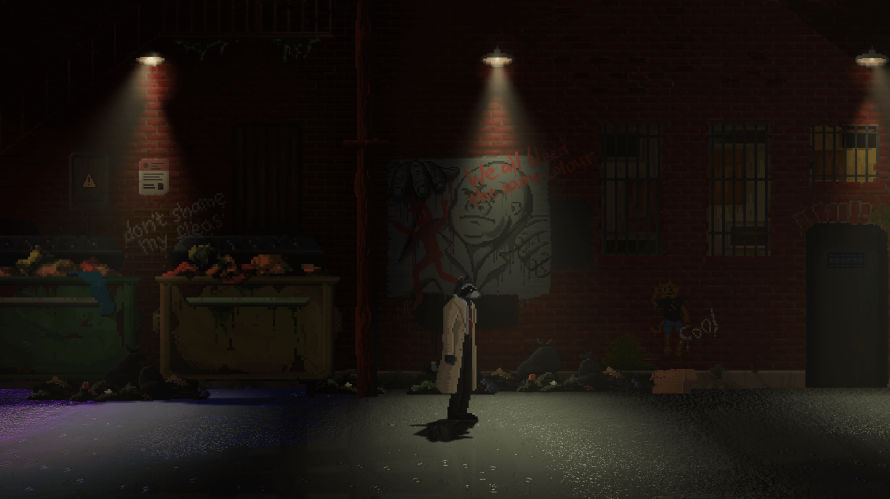 In more than a few ways, the dystopian world of Backbone resembles ours, what with its corrupt politicians, citizens/society divided into classes and all that dreadful stuff. There is one key difference however: it’s inhabited by anthropomorphic animals. At the heart of it all, we find Howard Lotor, a private investigator who… well, has trouble fitting in, so to speak. Something tells me his next case is going to be a change for the better (maybe?).

Whatever the case (get it?), there’s plenty detective work to be done on the pixellated streets of Vancouver, BC, perhaps even a bit of stealthy action from time to time, as you attempt to – WHAT IS THE DEAL WITH THAT ARM? Uh. Right. Was watching the trailer (below) while writing this, and suffice to say, you-know-what got real. Very real. Weird real. To the point where I can’t wait to see where that bit leads. Wow. Crazy stuff.

I mean, the Kickstarter page for Backbone does make mention of something called The Artifact, which is apparently – unsurprisingly – a piece of ancient tech, and something that “might change the regular order or destroy it”. Because why would it not be? At this point, it’s safe to say that everything about this game reeks of film noir, dystopia and other similar themes, and in the best possible way. Some might not like the whole walking, talking animals, but eh, I’d say it’s actually oddly fitting. That and it’s bound to add some uniqueness to not only the world but also its protagonist’s skill set. Maybe.

Challenging, thought-provoking storyline featuring themes of power, corruption, social decay and systemic discrimination. Backbone tells a tale about how our environment shapes us, and how we influence it in return.

That said… there’ll be no walking, crawling, running, sneaking, smelling (wait, what?), interrogating, evidence collecting or any other fun stuff unless Backbone reaches its Kickstarter goal. Still plenty time left though, but also a lot of money still remaining, with 27 days and $37,777 to go, at the time of writing. Would be a darn shame if it’s unsuccessful, as I really like what might become of this dark and slightly creepy adventure, but time will tell. 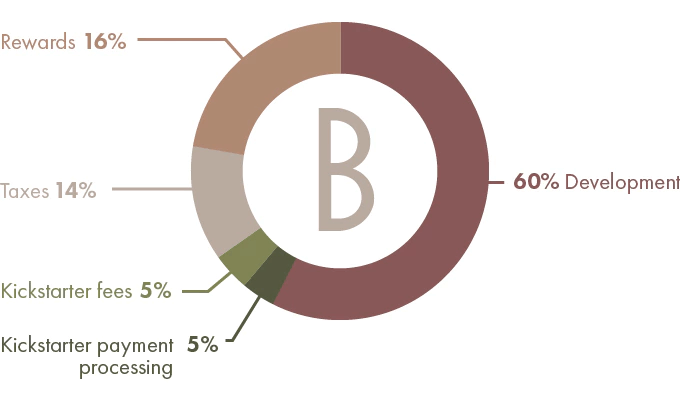 As indicated by the above pie (yay, pie!), only little over half of what they’re asking will be spent on development, the rest either going to taxes, Kickstarter related fees or – something far more interesting to most backers – rewards! Rewards like… The Unsolved Case ($201), which is a bit of a collector’s item, containing a case file full of “lore, puzzles and character study”. Not too shabby, I’d say. Or how about The Librarian ($70), “a full-color printed version of the Backbone Artbook”? That pixel art, man. So groovy.

Oh right, almost forgot: the game itself is currently scheduled for a July 2019 release, on Windows, OS X and Linux, with a $20 price tag. Playstation 4, Switch and Xbox One ports, in that order, will only happen if stretch goals are met, however. But first, the main goal has to be met, so by all means, even if you don’t feel like pledging, do spread the word about the Kickstarter. Pretty please?

(Thanks to CaptainD for the heads up!)